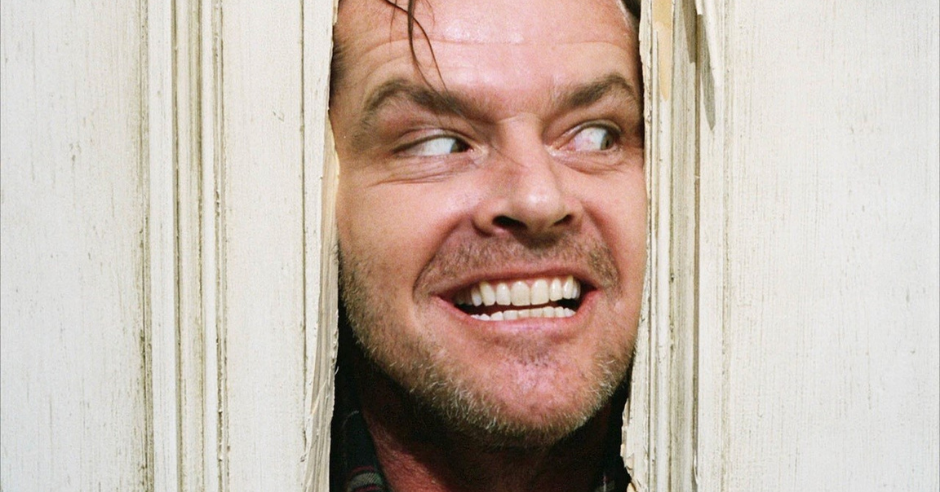 “Wendy? Darling? Light, of my life. I'm not gonna hurt ya. I'm just going to bash your brains in.”

How does one review a book that everyone knows about already (oops)? The Shining is so pervasive that you’d be hard-pressed to find someone who hasn’t heard of it. Cultural osmosis makes that a near certainty. Tack on the fact that most readers have settled firmly on one side of the Stephen King fence. Love him or hate him, he’s a force to be reckoned with, and The Shining proves it. I picked it up, naturally, to review it here. But I also read it for my ongoing Page2Screen series with Ian Simmons of Kicking the Seat–look out for our discussion of The Shining next week at KickSeat.com; the episode will cover both the film and book.

Mentioning the film verges on necessary in any review of The Shining, because so many people are familiar with “Heeeeeere’s JOHNNY” and the like. Stephen King’s original work is plenty present in Kubrick’s film, but as we readers know, books just hit different. This has perhaps never been more true than it is for The Shining, a hard-hitting crescendo of a book that bubbles and boils to an explosive climax. Whether or not you’ve seen Stanley Kubrick’s iconic film adaptation, The Shining is a fantastic read.

Jack Torrance, his wife Wendy, and his son Danny head to Colorado’s Overlook Hotel for the winter. Jack has been hired as the winter caretaker at the Overlook, a job he receives from a friend after he gets fired from his teaching job for, y’know, pummeling a student he kicked off the debate team. Jack’s five year old son has a knack for knowing what people are thinking, where lost things can be found, and what will happen in the future. This power–the shining–is fueled by the Overlook, where sinister things dwell in the shadows. As the Colorado winter snows them in, the Overlook begins to take its toll on the family, and Jack begins to lose his grip on sobriety and sanity.

The Shining is brilliant. It’s a masterpiece of character and a striking psychological thriller. By isolating his three main characters in a creepy locale, King opens doors into gradually degrading psyches addled by the isolation and the terrors running rampant through the Overlook. There came a point in The Shining where I blurted out “Oh, Jack’s crazy” to myself. As I read, I wondered if Jack was crazy the whole time, then I wondered whether I was crazy for not seeing how crazy he was from the get-go. Each successive chapter in The Shining dives deeper into the darkest portions of a character’s mind. Jack, Danny, and Wendy all feel intensely real in a way I’ve rarely experienced through my years-long reading career.

Movie buffs may not be surprised by this at all. But the movie eschews the psychological-thriller aspects of The Shining in favor of horror. You could argue that’s better for the screen anyway, and that’s fair. The movie has its merits, but the impact of the characters in King’s original novel is far greater than it is in the film. I came to know so much about the characters, even as King threw them into a downward mental spiral.

The Shining also features an entirely unique character: The Overlook. The hotel is essentially a character itself, constantly changing the way the Torrances think and act. It has a dark presence that reverberates through every page. As I read, at times I could feel the Overlook’s influence lurking behind every word, nudging Jack, Wendy, and Danny to do its bidding. The Overlook is pure tension. Juicy, horrific tension. It’s the embodiment of every bad thought or impulse a human could dream up. It brings these concepts to life and terrorizes the characters within it. Danny is an excellent foil to The Overlook. The hotel wants Danny’s massive power for itself, but it’s that power that gives Danny the mental capacity to resist it (plus his ability to read minds and predict the future). Danny is hunted for his powers and also protected by them, so the hotel finds the path of least resitance to acquiring him. The Overlook feeds on the weaker mind of newly sober Jack Torrance and drives him into a murderous rage in its attempts to stop Danny’s resistance (read: kill him) and absorb his power. It woos Jack, convinces him he is the one it wants, then uses him as a means to an end. The narrative arc of the Shining’s characters is dark, demented, and beautiful. It’s as much a joy to read as it is positively terrifying.

I wish I had more to offer to the conversation surrounding The Shining. Instead, I feel trapped by my own mediocrity. I know this book is excellent, and I know the characters–Overlook included–are some of the best I’ve ever read. But I can’t pinpoint every little thing that made me feel this way about the novel. Rather than a sum of its parts, The Shining is one cohesive whole that tells an amazing story. I can’t give it much higher praise than that.

Original Review Can Be Found Here