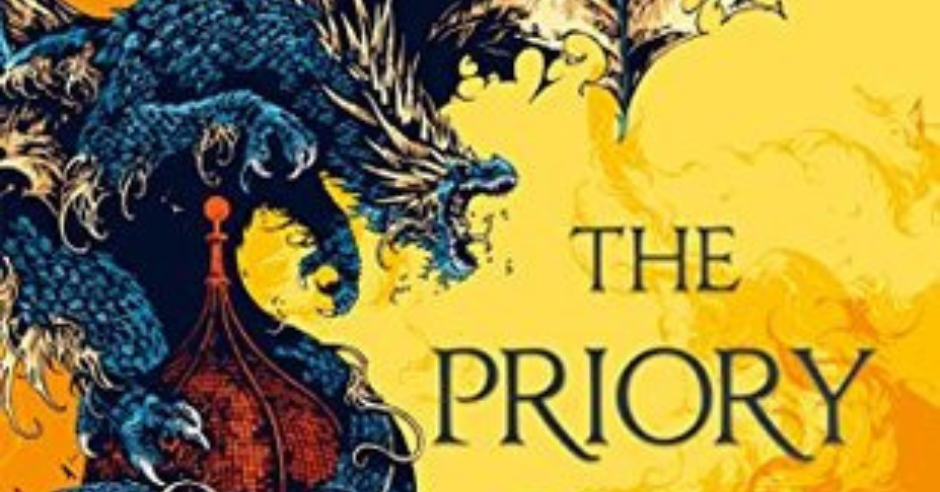 Review – The Prior of the Orange Tree by Samantha Shannon

The worldbuilding of the Priory of the Orange Tree is impressive and expansive. You can tell that Shannon poured her heart and soul into the creation of this world, and I’d be interested in seeing more stories told within it.

A world divided. A queendom without an heir. An ancient enemy awakens.

The House of Berethnet has ruled Inys for a thousand years. Still unwed, Queen Sabran the Ninth must conceive a daughter to protect her realm from destruction – but assassins are getting closer to her door.

Ead Duryan is an outsider at court. Though she has risen to the position of lady-in-waiting, she is loyal to a hidden society of mages. Ead keeps a watchful eye on Sabran, secretly protecting her with forbidden magic.

Across the dark sea, Tané has trained to be a dragonrider since she was a child, but is forced to make a choice that could see her life unravel.

Meanwhile, the divided East and West refuse to parley, and forces of chaos are rising from their sleep.

I’m not exactly sure where to start with this review of The Priory of the Orange Tree. I have mixed feelings on this one. It caught my eye based on the highly positive reaction that the bookish community has had to this novel, as well as my appreciation for the gorgeous cover. I started to read it about a year back and found myself putting it on pause because I struggled to get past a slow-feeling beginning. More recently, I participated in two challenges run by the co-hosts of On Wednesdays We Read Podcast, Hannah and Laura: “Mega May” (i.e., read 500+ page books) and “MAYbe This Time” (i.e., read books you previously DNF’d). At 800+ pages, Priory was the perfect candidate to kill two birds with one stone. So, I braved a second crack at this book.

Let’s start with the prose, as it is one of the aspects that I consider to be a strength of this novel. Samantha Shannon’s writing style is a pleasure to read, especially if you enjoy an epic storytelling experience. Shannon’s phrasing is often poetic, and she wrote numerous poignant quotes. One character’s statement that “when the heart grows too full, it overflows. And mine, inevitably, overflows on to a page” stuck with me, given I enjoy using writing as an emotional outlet. It is likely that any reader can find at least a few memorable lines that personally resonate with them. For me, the downside of her writing style was that it was often descriptive to the point of being prolix. Samantha Shannon does a solid job of setting scenes, but to me it felt extraneous to give so much information (e.g., it seemed like the reader is told what every character was wearing in excruciating detail). Others might enjoy this feature of her writing more than I did, particularly if they gravitate toward prose that elicits a very clear picture in the reader’s head.

The worldbuilding of the Priory of the Orange Tree is impressive and expansive. You can tell that Shannon poured her heart and soul into the creation of this world, and I’d be interested in seeing more stories told within it. Those who enjoy deep-dives into highly fleshed out in-world mythology, history, and culture will find a lot to love about this novel. For my own subjective tastes, though, worldbuilding is the least important aspect of fantasy storytelling. When it feels like a writer is worldbuilding solely for the sake of worldbuilding, rather than using it to serve characters or the plot, I usually lose interest. In the Priory of the Orange Tree, it seemed like every time a character referenced some historical, mythological, or religious event, they shortly followed it up with a relatively long story describing the event. I know this would work well for a lot of readers—it just doesn’t align well with my personal tastes. That being said, Shannon breathes life into her world with a diverse set of magnificent creatures, thoroughly developed cultures, and intricate belief systems. The setting is unique, which may partially account for why a greater book length was necessary. When you choose to create entirely new concepts in lieu of replicating well-established tropes that readers understand without preamble, then you have to provide more explanation (e.g., including elves evokes a clear picture for seasoned fantasy readers, while adding unique beings requires further explication).

I’m ambivalent about the characters in this novel. I enjoyed reading about Queen Sabran the Ninth, and I think she has a strong character arc, especially considering that she isn’t a point of view (POV) character. She has a complex blend of fragility and ferocity that reminds me of Daenerys Targaryen in the early books of George RR Martin’s A Song of Ice and Fire series. Ead (a lady-in-waiting at court who is concealing a secret identity) and Tané (an aspiring dragonrider in a culture that worships dragons) have some memorable moments as well, but their growth feels less natural than Sabran’s. The other two POVs were less interesting to me. Niclays Roos, a disgraced doctor living in exile, didn’t have enough personality to keep me consistently engaged with his plight. Still, Shannon did evoke some strong emotions from me regarding a few of his actions. The final POV character is Loth, a nobleman who has been sent away on a quest that is presumably a death sentence. He was a bland character for me. He appeared to have one note to him—he’s noble both as a noun and an adjective. Although he does eventually become somewhat less rigid, I don’t view him as a particularly dynamic character.

I also had a difficult time tracking who all of the different characters were in this book. I’m far from a newcomer to epic fantasy that has a plethora of characters, as I’ve read books from series like Malazan Book of the Fallen, the Stormlight Archive, the Wheel of Time, and more. However, I found it more arduous to consistently identify who was whom in Priory than I did in any of the aforementioned books, including the notoriously abstruse Malazan novels. I attribute my struggle with this aspect of the book to the minor characters typically not having many distinguishing or memorable traits about them. Luckily, there is a list of characters and their descriptions in the back of the book, which alleviates the issue regarding remembering characters to some extent.

I appreciated the feminist elements of this book. The novel has multiple well-written female characters, and I liked that many of the minor characters that populate the world happened to be women as well. I frequently find that even authors who try to write strong women as main characters in their books still default to writing every other guard, merchant, soldier, etc. as being men. Indeed, our heroes in Priory are almost all women, and Shannon finds a way to give each of them varied characteristics among both those commonly associated with masculinity and those associated with femininity. By doing this, Shannon avoids falling into the pitfall that many authors do when attempting to write “strong” female characters by making them solely embody masculinely coded traits. The book also deserves credit for its LGBT representation, making it a great choice to read during the presently ongoing Pride Month. The romance is well-written, too, though there is a moment where two characters get together that felt oddly-timed based on immediately previous events.

The plot of this book was interesting enough, but the pacing took away from my enjoyment of it. To me, it felt like the story could have been told in about 500 pages. Ead’s POV, which takes up much of the book, is heavily filled with court intrigue, so if that floats your proverbial boat, then you may not find the beginning of the book as slow as I did. The book does pick up toward the end, and I enjoyed the climax; although, it felt as though we could’ve gotten more time dedicated to the conclusion (that’s about as detailed as I can be without spoilers).

After finishing Priory, I took some time to sit with my reactions before writing this. It’s a nuanced book, and it deserves a nuanced review. I hope to have provided that in my perhaps overly lengthy review of a perhaps overly lengthy novel. For what it’s worth, if you struggled with the length of this review, then that might be a good sign that Priory might not be for you. When mulling over my thoughts on this book, I considered the question of if (and to whom) I’d be likely to recommend it. It was a tough read for me, so I hesitate to suggest this behemoth of a book when there are so many amazing shorter books out there. But if you are okay with lengthy novels and looking for a feminist epic fantasy with strong prose and comprehensive worldbuilding, then I can comfortably suggest that you check out the Priory of the Orange Tree.

Read The Priory of the Orange Tree