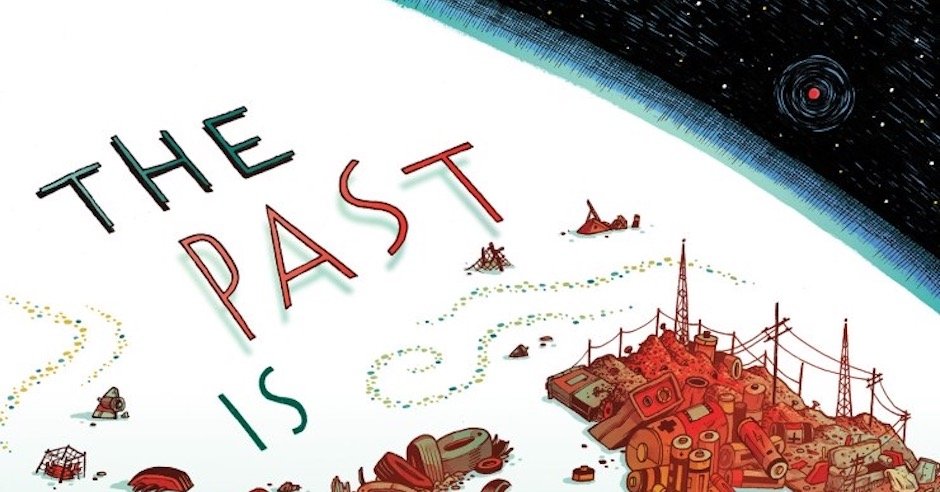 Review – The Past is Red by Catherynne Valente

“Actors are liars. Writers, too. The whole lot of them, even the horn players and the fortune-tellers and the freaks and the strongmen. Even the ladies with rings in their noses and high heels on their feet playing violins all along the Pier and the lie they are all singing and dancing and saying is We can get the old world back again.”

The Past is Red is Catherynne Valente’s novella-length sequel to her short story, The Future Is Blue (also included with this book.) It follows Tetley Abednego, the most hated girl in Garbagetown.

The Future is Blue started for a climate change anthology by Jonathan Strahan, called Drowned Worlds. One of the questions that anthology asked was, “What kind of stories would we tell in the new world created by the climate crisis?”

Valente’s response: Well, we’ll tell exactly the same kinds of stories we do now. Exactly the same kind of story we always have, through every apocalypse: the fall of Rome, the Black Death, Gilgamesh’s flood, the Warring States, all of it, the many times and ways in which the world has ended. We’ll tell stories about being born and falling in love and fighting with their families and hoping for something better and dying, because that’s what humans do and it won’t even take very long before that drowned world is just the world, the absolutely normal and even beautiful landscape of everyday life that, for the children and grandchildren of the end of civilization, will never have been any different.

The Past is Red is a slice of life in this post-apocalyptic scenario. The only safe place for humanity to live any longer is Garbagetown, which is just the real-world Great Pacific Garbage Patch made significantly larger. This massive pile of garbage drifts through the ocean, with humans claiming different pieces of it for their own territories—Candle Hole, Electric City, Pill Hill, Winditch, Matchstick Forest. The small parts of how people live on Garbagetown were fascinating—how wedding customs would change, how they ate, how they used what we would throw away.

There’s a place in Toyside where you can pull one big tangled ratking of a string and a mountain of dolls scream at you with a sound like the death of joy while saltwater pours out of their mouths. I’ve done it twice. It’s the best.

The Past is Red is a book with voice. Tetley Abednego is funny, cynical, insightful, emotional, and it all coalesces perfectly. She is both an optimist and a realist, and it never conflicts. She’s fiercely protective of Garbagetown, even though it’s never treated her well. She was largely neglected as a child, but her decision at the end of the short story The Future is Blue means that she wakes up every day to new slurs painted on her door. Anyone in Garbagetown is legally allowed to abuse her, though not kill her, and her response is “Thank you for your instruction.” Mostly she just waits for them to tire of it so she can go back to doing what she likes.

But she hates us, and what we did to our future.

They’re all dead, so none of their rules kissed them goodnight with a story or whatever you were going on about just then. Seems like someone should have thought of a rule that goes Do Not Fuck Your Only Planet To Death Under Any Circumstances. Seems like that should have been rule number one.

The dual plots of the book include her marriage to King Xanax, a man who uncovered what the various pharmaceutical pills in all their washed-up bottles do, and her discovery of a piece of our technology that can talk to her, with a limited artificial intelligence. Both of these stories collide, but the meeting of these as plot points feels perfunctory, while the thematic points raised by both those plot-lines are far more fascinating.

The Past Is Red ends, much like The Future is Blue, with Tetley making a decision that she believes will help her people without letting anyone else in on her secret.

The Past is Red is brilliant, both furious and delighted, bursting with life and voice and setting, and my favorite book I’ve read this year.