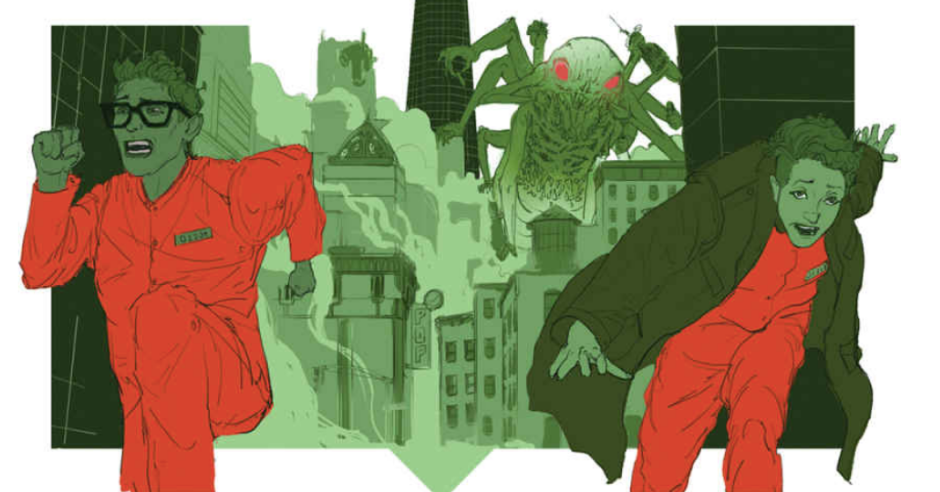 Guest Review – The One Hundred Percent Solution by G.M. Nair

The Future Group is the city’s biggest and most lucrative company even though no one really knows what it is they do. Michael Duckett has worked there for four years and he still has no clue. All he knows is that he hates his meaningless job and all the people in it. But it pays the bills. Bills that have been stacking up since his roommate and best friend Stephanie Dyer decided to open a detective agency – despite her chronic inability to commit to anything.

When Michael is suddenly fired, he and Stephanie are forced to return to the world of private investigation against his better judgment. A mysterious woman wants to enlist the services of Duckett & Dyer: Dicks For Hire to track down an assassin who has a bone to pick with Michael’s former employer. Apparently, The Future Group has been harboring a deadly secret for decades. One that could put the world in the grip of an indescribable horror.

It turns out Michael was lucky to get out of that job alive. Too bad he and Stephanie are being dragged back to work.

There might be some slight spoilers for Duckett and Dyer: Dicks for Hire in this review. Honestly, the books are so deliciously bizarre that you wouldn’t believe me if I gave you a play-by-play, although I’ll refrain.

Duckett and Dyer: The One-Hundred Percent Solution picks up pretty much right after the events of book one. After hopping through multiple universes, each one weirder than the last, life has returned to semi-normalcy for both Michael Duckett and Stephanie Dyer. Stephanie is attempting to ruin her detective business (totally on-brand for her), and Michael is working a soul-sucking job. There are a few changes, though: Michael has vowed to be a better friend to Stephanie. Stephanie, after a heart-to-heart with a future self, has made it her mission to protect Michael from any possible harm.

Unfortunately, Stephanie’s mission to destroy her own detective agency comes at a very bad time: Michael gets fired from his job. Fortunately, the detective duo finds themselves with something new to detect. They only get weird cases, and this one proves to be no exception.

The main characters are delightful. Michael has turned eye-rolling and long-suffering sighs into a fine art, and Stephanie is a walking Murphy’s Law. Of course there are many other fine characters, including an Illuminatist and an octopus-wearing cult member. It all makes sense in a zany sort of way.

The problem with this book is that it’s too freaking funny. I was forced to ignore any and all responsibilities to laugh my way through. It’s a real problem, I tell you. Also, I guffawed too loudly, almost spit my coffee across the room, and subjected my poor husband to snippets of the book without giving any context. Basically, this book turned me into an obnoxious jerk. I loved it.

Guest Review Once and Future Witches by Alix E. Harrow