Home » All Reviews » Review: The Memory Librarian by Janelle Monáe

“You’ve got to dream a future before you can build a future.” 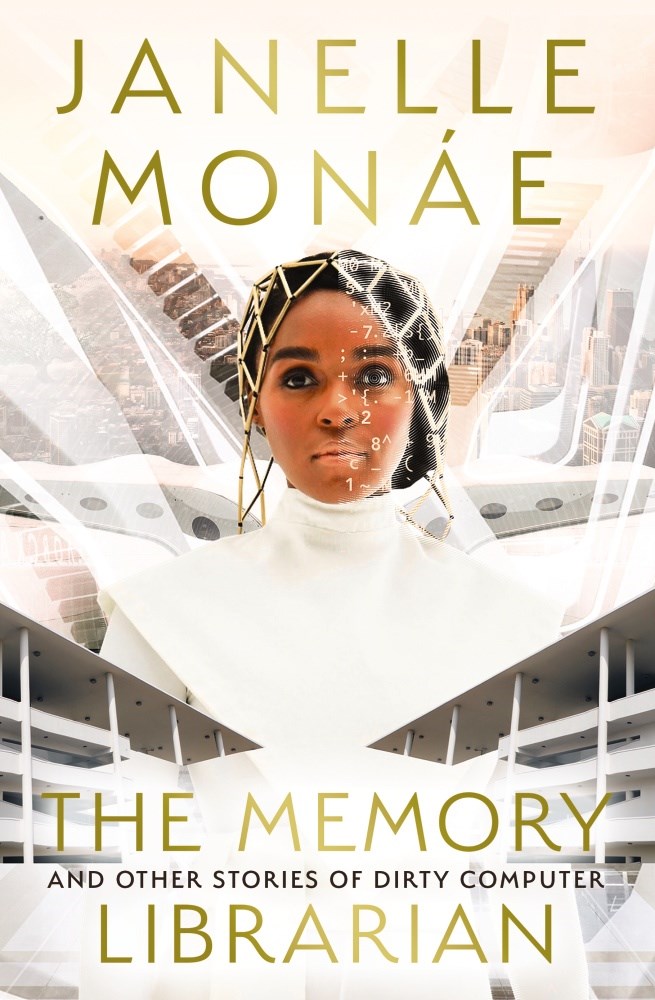 Janelle Monáe is widely acclaimed as a singer/songwriter, film star, fashion icon, and social activist. Her list of awards has its own Wikipedia page, with 137 nominations and 48 wins at the time of writing this review. With the release of her debut book, The Memory Librarian, Monáe can now add published author to her impressive list of accomplishments. Is there anything Janelle Monáe can’t do?

Monáe is a lifelong science fiction enthusiast, even stylizing an android alter-ego for the recording of her first album, The ArchAndroid. Her most recent album, Dirty Computer, is a genre-bending Afrofuturist masterpiece rooted in hip hop but with varied influences ranging across pop, rock, funk, and soul.

Dirty Computer is a concept album that imagines a dystopian future where technology is used to wipe the memories of non-conformists living under an Orwellian techno-authoritarian regime. The album is a perfectly crafted sonic masterpiece, brimming with emotion and delivering an impassioned message about social justice.

The world of Dirty Computer comes visually to life in Monáe’s 44-minute companion film, or “emotion picture,” which is freely accessible on YouTube. The emotion picture incorporates Monáe’s full set of music videos for the album, interwoven with narrative snippets that provide context for the story and show how the individual songs fit together within her overarching theme. With the publication of The Memory Librarian, the totality of Monáe’s vision has come to life, spanning across the auditory, visual, and now the written word.

The Memory Librarian contains five stories set in the world of Dirty Computer. Monáe has recruited five well-accomplished collaborators for her literary debut, one for each story. The first two stories are novella-length and co-authored by Alaya Dawn Johnson and Danny Lore. The remaining three short stories are co-authored with Eve L. Ewing, Yohanca Delgado, and Sheree Renée Thomas. Monáe’s collaborators bring remarkable credentials and a long list of literary awards and achievements to this project.

Before opening the first pages of The Memory Librarian, I was honestly a bit concerned that having a different collaborator for each story might lead to an inconsistent tone or style across the book. Fortunately, my concern was unfounded, as Monáe’s voice shines vibrantly across the pages of all five stories with remarkable fluidity.

While many sci-fi novels devote excessive time explaining their world and related technologies, Janelle Monáe takes the opposite approach, focusing on the people who inhabit this dystopian world governed by the neofascist, technocratic New Dawn regime. Individuals who fail to meet New Dawn’s strict rules of conformity are labeled as “dirty computers,” having bugs that must be eliminated through violent attacks, imprisonment, and memory erasure.

The stories in The Memory Librarian address issues of racism, feminism, homophobia, and more, as New Dawn specifically targets members of the queer Black community. Readers will be profoundly moved by the experiences of these characters who face such violent intolerance just for being themselves and living their own authentic lives. I found Monáe’s treatment of gender identity and transphobia to be especially powerful. Although the discussions of morality could come across as heavy-handed at times, I believe this is the right approach for addressing such critical issues in basic human rights.

Janelle Monáe is one of the finest lyricists in modern music. Although The Memory Librarian doesn’t quite rise to those same poetic levels, it remains beautifully written and eminently readable throughout. Long-time fans of Janelle Monáe (lovingly dubbed “fandroids”) will appreciate the subtle references to her discography scattered throughout the book.

While The Memory Librarian can stand on its own as a powerful work of literature, the impact of the book is greatly enhanced when read in the context of Dirty Computer and the accompanying emotion picture. Janelle Monáe has completed an extraordinary trifecta of artistic expression across three forms of media. As a combined artistic work, Janelle Monáe earns an enthusiastic 5/5 from this appreciative fandroid.