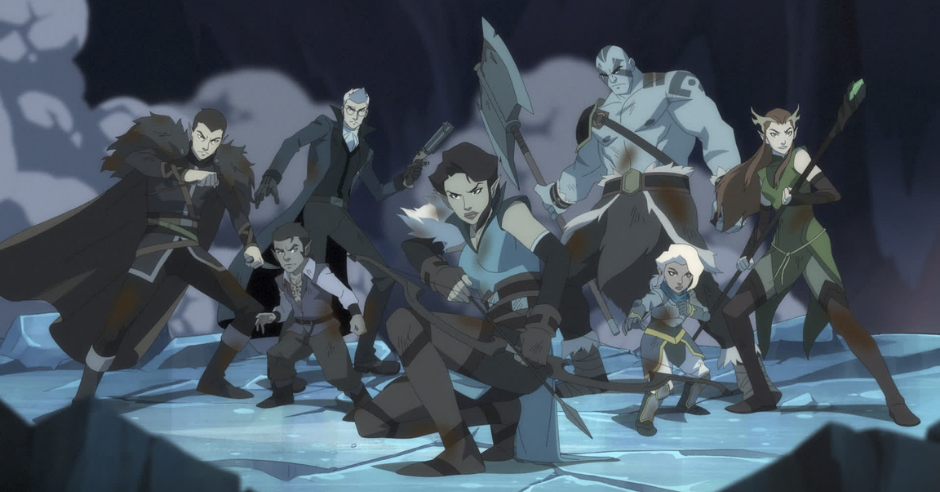 They are an eclectic bunch

THE LEGEND OF VOX MACHINA is a twelve-episode animated fantasy series based around the first season of Critical Role’s expansive multi-hundred-hour Dungeons and Dragons campaigns. The title, Vox Machina, comes from the fact the latter is a cast of voice actors doing a Dungeons and Dragons campaign “live” on streaming. Being all professionals, they certainly brought a great deal more acting than the typical college age or adult gamer did. I should note that I was familiar with Critical Role due to Vampire: The Masquerade‘s LA by Night but not the fantasy campaigns that were a bit too intimidating to get in even for myself.

Recruited to go slay a dragon that has done away with multiple adventuring groups as well as the villages around them, Vox Machina quickly proves surprisingly capable when it is their absolute last option. No sooner do they successfully prove their mettle, though, than they find themselves dragged into a much more personal and horrifying story. A vampire and a necromancer have taken over the family estate of one of their own but are well-beloved outside of their home while they’re still distrusted mercenaries.

Overall, Vox Machina is a pretty good mixture of crass humor and drama. The adventurers are a bunch of incompetents at everything but killing but they are very good at the later. The villains are not silly in the slightest but genuinely monstrous and evil. Despite this show being animated, it is targeted at adults and makes no attempt to shy away from gore or traumatizing situations. We see dozens of people killed, mutilated, and savaged onscreen. In addition to the violence there’s copious swearing, sexual innuendo, and a light bit of nudity.

Honestly, the first couple of episodes aren’t particularly representative of the whole. They are the most “try hard” with Vox Machina being portrayed as a bunch of coinless losers who wouldn’t be out of place in a Seth MacFarlane version of The Lord of the Rings. This changes as their most obnoxious qualities are toned down and the R-rated humor is dialed down for genuine pathos with the second storyline. It gave me a bit of tonal whiplash to be honest and I wish they’d stuck to a more even balance between vulgarity versus drama. Frankly, I kind of wish it had remained more of a farce over tugging the heartstrings.

Representation wise, the series does a pretty good job of showing a different sort of society than typical in Western fantasy. Multiple characters in Vox Machina are bisexual (Vex, Vax, Keylith, and Scanlan) and there’s no social stigma against any of it. The monarch of Tal’Dorei is also black, which helps compensate for the fact the protagonists are pretty lily white except when they’re blue.

The art is exceptional for the series with the character designs being both memorable as fluid in their animation. I think Vex (Laura Bailey) and Percy (Taliesin Jaffe) are particularly well-designed characters. All the cast are well-established voice actors, though, with most of them likely to be memorable to you if you’re an established gamer like myself. I particularly liked Ashley Johnson’s Pike who was the most soft-spoken as well as, well, “sane” member of the group.

It’s a shame this is not an official Dungeons and Dragons adaptation, but the differences are minuscule. The blue dragon still shoots lighting for example, and they call Vecna “The Whispered One” but that’s one of his nicknames anyway. The action is fluid, and you’ll see a lot of it in each episode. It’s like if someone combined Slayers and Hellsing, which is entirely my jam as a Nineties anime fan. If they could get this kind of voice talent for other animated projects, we might finally see proper adaptations of the Forgotten Realms and Dragonlance.

Dungeons and Dragons has suffered for the fact it has never been able to make a really good adaptation of its material for the big screen. The best one: Record of Lodoss War was an anime that pretty much ignored its gaming origins. Here, it is very obviously Dungeons and Dragons with the serial numbers filed off, and all the better for it. It has some bumps, hits, and misses but I would say this is a solid 7 out of 10 class levels.