Home » All Reviews » Review – The Last Prince by E.G. Radcliff

A Kindle Book Award Semi-Finalist in 2021, The Last Prince by E.G. Radcliff, is Book Two in the author’s The Coming of Áed Series, but is a prequel, rather than a sequel, to the outstanding The Hidden King, which was the first book in the series. 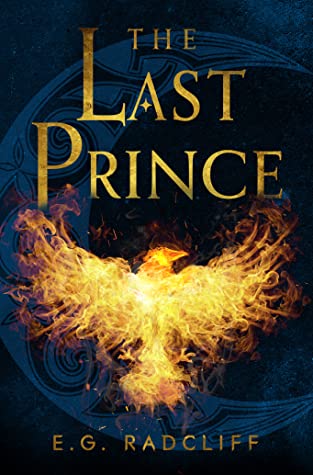 At first, I candidly admit that I found it a curious choice to write the follow-up book in a series about the events that took place before the first book. Moreover, I was concerned that, knowing the fate of Ninian and Áed’s relationship, I would not be as invested in reading about prior happenings.

Wow, was I mistaken! This poignant, heart-wrenching, beautiful book greatly moved me, and now I can’t envision reading this series any other way, then having the second book as a prequel.

The Last Prince truly is Ninian’s story. We see him alone, a young boy, an orphan, and a vagrant, barely scraping by on the streets of the Maze, which is the seedy, depressing, labyrinthine slum-like residential area that readers were first introduced to in The Hidden King. Ninian is starving, stealing to survive.

Máel Máedóc is a store owner, whom Ninian steals from. Caught by Máel Máedóc, Ninian is in the gruff but secretly tender-hearted store owner’s debt. Feeling compelled to earn back the money equaling the value of the stolen food, Ninian meets a woman, Laoise, who displays unusual kindness towards him, in a place where the denizens are frequently without mercy or compassion.

But kindness on the streets of the Maze typically comes with a price. In this case, Laoise, after seeing Ninian defend himself well in a brawl, “sells” Ninian’s fighting services to a dangerous street gang.

Trapped in the vicious gang, with no seeming way out other than death, Ninian, who learned his fighting craft from his deceased mother, earns credibility and worthiness to the gang as a fearsome fighter and enforcer. Though, after a horrific incident, the noble Ninian vows not to kill any of the gang’s enemies, only injure them.

In time, working to pay of his debt to Máel Máedóc, Ninian meets Áed, a wounded and seemingly mute boy, whom Máel Máedóc rescues and fosters. What initially begins as Áed fearing Ninian, and Ninian desperate to protect and help Áed recover, turns into a deep friendship, and years later, an abiding love.

But the constant danger of Ninian’s life with the gang, and a secret that Ninian uncovers about Áed’s heritage, threaten to rip the two damaged lovers apart forever.

This slow-burn, character-driven novel, touched my soul. It would take a very cold heart not to be warmed by the beauty of Ninian and Áed’s love for one another. With this installment, we learn much more about the backstory of Ninian in particular. The loss, tragedy, abuse, and despair that both Ninian and Áed come from, only to find comfort and security in each other, greatly accentuates the pathos for those who have read “The Hidden King”. Because we the reader knows what awaits them.

While the courage and humanity of Ninian and Áed shine through their pain, trauma, and capacity to still trust, and love, the complex secondary characters are mostly decidedly unlikable. Still, they evoke empathy, and are very realistically drawn by the author. For the most part, they are products of the soul-crushing existence that the downtrodden must eke out in the Maze. Either take advantage of, and hurt others, or hurt or be taken advantage of, is the Maze’s code.

Though the tougher themes in the novel, including abject poverty and misery, brutality, torture, and sexual abuse, are extremely sensitively and properly handled, it does not mean it won’t be hard to read.

I was heartbroken by what Ninian and Áed endured, and what Ninian felt forced to do to others, in the book. Still, seeing the two lovers find each other was wonderful, even if we know it will be only temporary happiness. My recommendation, don’t read this book without a tissue box handy.

As with the previous book, Radcliff’s prose is delightful. Her stellar writing style is very eloquent, but simultaneously simple. At around 325 pages, this book can be read quickly, but one will want to take sufficient time to absorb Radcliff’s lovely writing.

“Ninian stepped into the sanctuary more fully, brushing his palms over the tips of tall grasses. The air smelled earthy and living, and though the plants looked a little scrawny, there were a lot of them. A woody vine crawled over a windowsill, playing hose to a line of ants; yellow flowers on spindly stalks swayed in the breeze. Low to the ground, bluebells carpeted every patch of earth not covered by cobblestones or grass.”

Radcliff really earns her stars in this five-star read, a tale of struggle, survival, and love that is emotional, haunting, and ultimately unforgettable. I have The Wild Court, Book Three, and the finale in the series, already on my shelves. Rest assured I will definitely be completing my reading of this wonderful series.

Check Out The Last Prince