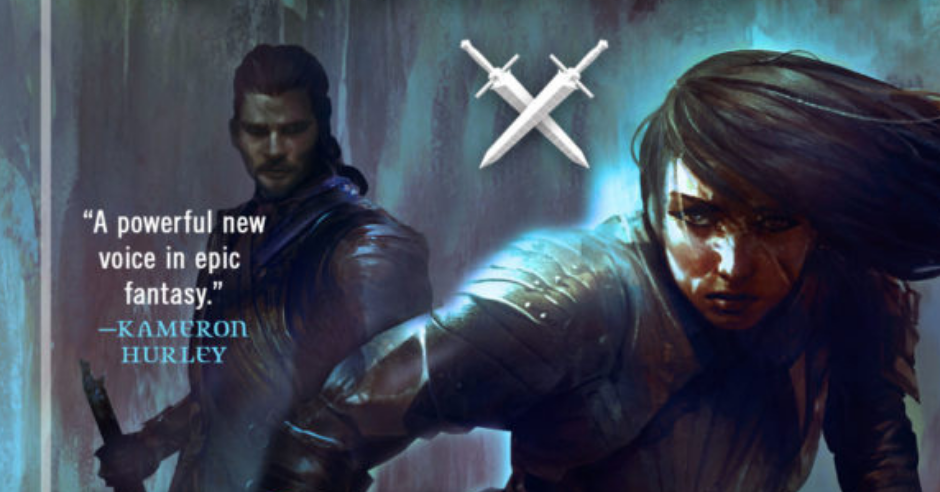 Damn the Consequences, and Damn Those Who Stand in Her Way.

“I never questioned anything Yeshin did in those days. “Get your dogs and come take a walk with me,” had been enough to send me running from my room and down to the kennels, where I nearly tripped over the door in my haste. For all that his anger could frighten the wits out of me, time spent with my father was still a rare, precious thing.”―

“Intricate, intimate, and intensely plotted.” – Nicholas Eames on The Wolf of Oren-yaro
The stunning sequel to The Wolf of Oren-yaro where the queen of a divided land struggles to unite her people. Even if they despise her. K. S. Villoso is a “powerful new voice in fantasy.” (Kameron Hurley)
The spiral to madness begins with a single push.
Abandoned by her people, Queen Talyien’s quest takes a turn for the worst as she stumbles upon a plot deeper and more sinister than she could have ever imagined, one that will displace her king and see her son dead. The road home beckons, strewn with a tangled web of deceit and impossible horrors that unearth the nation’s true troubles – creatures from the dark, mad dragons, and men with hearts hungry for power.
To save her land, Talyien must confront the myth others have built around her: Warlord Yeshin’s daughter, symbol of peace, warrior and queen, and everything she could never be.
The price of failure is steep. Her friends are few. And a nation carved by a murderer can only be destined for war.

The Ikessar Falcon, the follow up to by K.S. Villoso’s The Wolf of Oren-Yaro is a book that avoids many of the pitfalls common to the middle book in the trilogy, and instead offers the readers clear plot progression, excitement, and character development.

“I’ve heard rumours you were dead.” “That’s an improvement. Last time they said I was fucking goats.” “Oh, we took that one for a fact. What the hell are you doing here?”

The Wolf of Oren-Yaro was one of my favorite reads last year. “Bitch, Queen, whore, warrior, wife, and mother: In The Wolf of Oren-Yaro by K.S. Villoso, Talyien aren dar Orenar is all of these and so much more.” After I finished Oren-Yaro, there was much fist-pumping. Talyien is a badass. Plain and simple.

However, something changed as I read The Ikessar Falcon. While, Talyien is still very much a warrior queen, or Bitch Queen as she is often referred to by those who are lesser than her, she is not a caricature. She is not all sword and no soul. She is not all bravado with brains. Talyien is a bruised, batteling, and in some ways, a broken warrior who wants to protect those she loves. At all costs. Her upbringing allows her to do what must be done, however painful. But her heart and empathy allow her to understand the consequences of her actions. She internalizes them; she is bruised and broken by them. They become as much a part of her psyche as her sword training.

To give a very brief synopsis, the Bitch Queen is trying to save her son. I am going to quote the blurb on this because I think it sums the story up best, “Queen Talyien’s quest takes a turn for the worst as she stumbles upon a plot deeper and more sinister than she could have ever imagined, one that will displace her king and see her son dead. To save her land, Talyien must confront the myth others have built around her: “Warlord Yeshin’s daughter, a symbol of peace, warrior and queen, and everything she could never be. The price of failure is steep. Her friends are few. And a nation carved by a murderer can only be destined for war.” As this story is much more about Tali’s internal struggles and people’s perceptions, it is not easy to sum it up.

But know this, it is a great and terrible quest done by a mother who will do anything, and I mean anything, to save her young son.

Ignorance can be the sweetest sin.”

One of the things that stick out for me about Ikessar Falcon is that it is not an easy book. Firstly, my copy of the story clocks in at just under 600 pages. This can be daunting, but I don’t want you as a reader to look at this tome and “nope” out. The Ikessar Falcon isn’t a filler of a story where 250 pages are an actual story. The other 300 are extemporaneous filler pages describing the doorknobs, what the world looks like in painful detail, and what the Bitch Queen is wearing at various moments. I am looking at you, Robert Jordan. (Don’t send me hate mail) What it does have is a complicated plot, with multiple layers of political machinations, batteling, warring cultures and religion/belief systems, and a collection of antagonists that are downright scary in the psychopathy.

Because of the amount of detail, political factions, it is easy to get lost in the book. It is my only quibble against the superb writing. I got lost a few times and wasn’t sure whom Tali was talking to. So I backtracked to catch up. This probably is entirely on me, and your results may vary. If I were to reread this, I might make a chart to better understand the various war chiefs and locations. The world-building is exquisite, and as a side note, Villoso describes food in great detail. Some may not appreciate this, but I believe that getting to know a culture or a person, you can get a greater understanding of them by looking at the food they eat. Food is a cultural thing that all humans partake in. What we eat varies from place to place and can be defined by local produce and history. If you want to get to know a place, check out the food first. It is a good character and place identifier that is not often used in storytelling.

“The Oren-yaro do not lack for courage, it is true. We know how to face battles when the odds are stacked against us. We know how to give our lives for our lords and believe we know sacrifice like no other. But I did not face that dragon as an Oren-yaro. Our tenets may run deep, but they do not make us. I decided that if I ever get out of this alive, I would tell Rayyel that. We are flesh and blood, not words; we bend, we break, but our failings need not be etched in stone. I faced the dragon as someone willing to give her life for another not because of some deep-seated arrogance that I was better but because it was the right thing to do.”

I want to talk briefly about the relationships in this book. If I say too much, I will give things away. However, Tali’s relationships with the side characters in the story hinge on perceptions that those characters have of her and what she should be rather than what she is. This is true to some extent with Talyien and how she perceives who she is and her responsibilities. She is forever the daughter of a violent warlord, one who carved a road through the country made of the blood of those who stood against him. Is this Talyien? Is this who she is? I don’t think she even knows, at least not yet. But slowly, as the story progresses, we see more and more of who she is. Not always the warlord’s daughter, the betrayed wife, the mother, the childhood friend, and Talyien. The Bitch Queen who will hold her country together and save those she loves.

Damn the consequences, and damn those who stand in her way.

I know that K.S Villoso has much to show us readers. I know there will be more heartbreak, intrigue, power plays, and psychopathic characters. I am ready for it. Bring it Villoso, bring on the woe. Tali is a character that I think will bend but will not snap. One that will continue to do what is best and damn the consequences. I am here for it.

I received a copy of this from Orbit in exchange for my open and honest review.