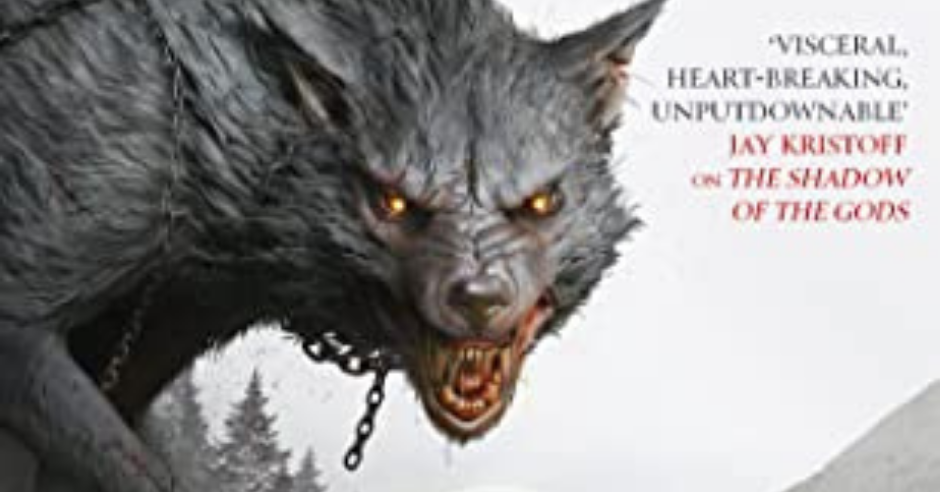 Review – THE HUNGER OF THE GODS by John Gwynne

as with any Gwynne book, the fight scenes are choreographed to perfection.

This book kept me reading compulsively the past two days with barely a break only to shatter me into ity bity pieces as only John Gwynne can do! Yet another new personal ‘book of the year’ candidate in THE HUNGER OF THE GODS!

Without futher introduction, let’s get to the review!

The paths of the Battle-Grim and the Bloodsworn collide, as the dragon-god LIk-Rifa, now awoken, makes her plans for world domination, and only the might of another god can hope to oppose her. But that god is also dead, and will need to be raised by mortal hands, and dark magic, if Lik-Rifa is to be defeated. But gods have their own purposes, and the wolf-god Ulfrir is not one to easily suffer being tamed by humans.

So continues the epic saga by heralded fantasy author John Gwynne, begun in “The Shadow of the Gods”, Book One of “The Bloodsworn”, continued in Book Two, “The Hunger of the Gods”. This spectacular Norse-inspired does not disappoint with its second installment.

As in book one, we are treated to three very distinctive and fascinating POVs.

The first POV is Orka, a widow, mother, and unmatched fighter. Orka’s life has been reduced, essentially, to a single minded purpose: to retrieve her son Breca, who has been abducted, and lies in the clutches of forces loyal to Lik-Rifa. But not even a god can stand in the way of Orka’s burning desire for vengeance, and to save her only child. But now Orka’s journey to rescue Breca has reunited her with the Bloodsworn, of which she used to be the leader.

The second POV is Varg, former fugitive, and new member of the Bloodsworn crew, who is just beginning to discover his capabilities as both fighter and inheritor (like many of the other characters) of magical blood that can transform him into a killing machine.

The third POV is that of Elvar, warrior of noble birth, still trying to prove herself, and seek acclaim, among the indomitable Battle-Grim mercenaries. After overcoming challenges to her leadership, Elvar now leads the Battle-Grim, and is discovering the burdens of that leadership. She must lead the Battle-Grim to further riches and glory, and all while accomplishing the mission that binds her to Upsa, which is to rescue Upsa’s son. But all roads seem to lead to Elvar confronting her past, her noble upbringing, and the ruthless father who she spurned, to forge her own path.

“The Hunger of the Gods” adds two POVs that were absent in “The Shadow of the Gods”. Gwynne ingeniously provides us with the viewpoints of some of “the enemies” of the main three protagonists. It is exceptionally done, and I loved getting into the minds of these highly flawed, yet engrossing characters.

The first additional POV we get is Biorr, the heinous traitor in the eyes of Elvar, from the first book. Biorr’s despicable deed haunts him, even though he believes it was necessary. The reader will likely feel some measure of empathy and understanding of why Biorr has acted the way he has, even if it can’t be condoned. Biorr’s anger and desire for revenge on his people who have been enslaved because they are Tainted, is reasonable, and one can see why Biorr has chosen to cast his lot in with the rapacious Lik-Rifa.

The second POV we get that differs from “The Shadow of the Gods” is Gudvarr, another villain of the story. Gudvarr is not all craven, and not unresourceful, but also not far from as politically astute or brave as he believes himself to be. His insecurities and failings are laid bare for the reader, as well as his hypocrisy and cowardice. Still, at times the reader may feel sympathy for this character, who aspires to be a great warrior, and gain the attention of his aunt. His POV chapters also provide some welcome levity, and he fumbles and stumbles his way into great peril, and also great opportunity.

One of the reasons that Gywnne is one of my all-time favourite authors is his outstanding characterization. Gwynne really knows who to portray the physical description and motivations of his characters in a way that appeals to the reader’s senses. Each POV representative has a distinct voice, incentive, and beliefs that shape their character. The characters are forced to constantly examine their goals and objectives throughout the book, and realize that attaining them may cost them everything. Still, they press on, with a growing understanding, and ultimately courage, to face those costs.

While I truly enjoyed all the players in the book, Orka, I believe, will eventually go down as one of the all-time best characters in fantasy literature. The combination of her unequaled prowess in battle, her will, her stoicism balanced with her gentle side, her fierce maternal instincts to protect her child, make her one of the most compelling characters I have ever read anywhere.

I loved returning to the gritty, stunning, atmospheric land of Vigrid that Gwynee has created. Gywnne’s superlative worldbuilding skills continue to be displayed, as evidenced since his previous first series “The Faithful and the Fallen”. Gods walking among us, in the form of giant animals, that can assume human form; witches, trolls, giant ravens, spertus, tennurs, zombies, and a host of other fantastic creatures, populating Gwynne’s world, make for an engaging read. The blood magic of the Tainted – mortals whose blood contains that of a patron god, and enhances their fighting abilities – is a great concept.

Gwynne’s accessible yet lovely prose, evocative, even cinematic writing will continue to delight his fans, as the author paints an incredible landscape of cities built from the carcasses of dead gods, bold heroes, and desperate quests. Gwynne captures the essence of what heroic fantasy should sound, smell, and taste like.

Finally, but certainly not least of all, as with any Gwynne book, the fight scenes are choreographed to perfection. Those scenes are vivid, grisly, exhilarating, and the skill of craft that Gwynne brings to fantasy battles is almost unparalleled. For me, only a few select authors in the genre such as Evan Winter, Janny Wurts, Bernand Cornwell, and Miles Cameron can hang with Gwynne when it comes to depicting intense, blood-soaked confrontations.

“The Hunger of the Gods” is a fantastic follow-up to “The Shadow of the Gods”, and the ending, if it reads as it seems to read, will totally rip your heart out in inimitable John Gywnne fashion.

Five bright stars for “The Hunger of the Gods”! John Gywnne will always be a must-read author for me, and no question, I am very eagerly awaiting the final installment of “The Bloodsworn Saga”!

Read Hunger of the Gods