Review – THE BLOOD OF THE SPEAR by Mark Timmony

Two brothers. One prophecy. A world on the brink of destruction… 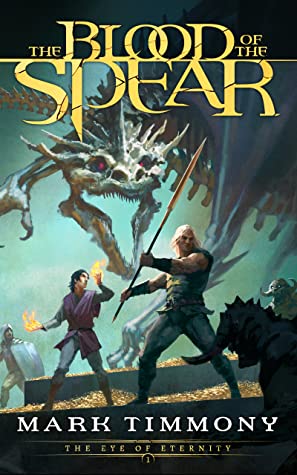 As I continued through my #IndieAugust reads, I encountered a book that favourably reminds me of entries from Robert Jordan’s esteemed “Wheel of Time” series.

That book is “The Blood of the Spear” – “The Eye of Eternity” Book One, by Mark Timmony. With an intriguing assembly of characters, fantastic action, a fast-moving plot, and immersive worldbuilding, this first installment of a series had loads of upside to become a VERY popular saga in years to come.

The novel is set in the continent of Athmay, which is a broken place, sunderered primarily into the Western Realms, and the Eastern Half. Hundreds of years prior to the events of the book, great sorcerers known as Summoners – for their power to summon demons at their behest to serve their will – tore the land apart in their conflicts, nearly destroying the world.

Since that time, though the Summoners have been vanquished, and disappeared from the face of the earth, their demon servants still wander in small numbers, causing mayhem and death wherever they go.

There is such trepidation among humankind that the Summoners could return, causing another apocalypse, that any child born with the Summoner’s mark (a distinct birthmark that appears on the back of the right hand), or any adult found bearing the mark, is executed.

Enter two brothers, Kaiel and Darien. Kaiel, the older, aspires to become a demon fighter, while Darien is resolved to be a sorcerer. When Kaiel fails at his opportunity to join the elite Bronze Guard, he returns home to find his brother plans to pursue his own ambitions, despite Kaiel’s wishes to keep him safe.

Kaiel’s life is also complicated by the fact his love interest – Sevanni – is the sister of his greatest rival, who has taken Kaiel’s place in the Bronze Guard. Eventually Kaiel enters the service of a distinguished nobleman, Prince Alesandr, as a sellsword.

But Kaeil’s new employment will lead to disaster, as secrets about the brothers’ ancestry are revealed, and competing dark forces, including the Prince, want to either use the brothers for their own purposes, or destroy them.

Now when I assert Timmony’s work reminds me of Jordan’s, for me that means, by necessity, there will be present in the novel what many fantasy fans will consider well-used tropes. But these tropes are done expertly.

Hidden heirs, reluctant heroes, scheming magicians, magic talismans, band of underdogs, dire prophecies of doom, and many more elements that you may have read in other great fantasy classic novels, you will find in “The Blood of the Spear”. They will feel comfortingly familiar, and yet fresh and vibrant with Timmony’s take on these popular conventions.

The magic system is the way I like it – with enough detail to seem plausible, and enough mystery to keep me engaged, and wanting more. Demons, sorcerers, giant spiders, and all kinds of monsters abound. The different regions, realms, cultures, noble houses, histories and races Timmony has compiled is quite impressive in terms of overall worldbuilding, as evidenced by the glossary at the end of the novel.

I loved the aspect of all the Borderlanders always checking – even on people they have known for years – to see if they are hiding the Summoner mark. It was a great feature, illustrating  how pervasive the fear is of the Summoners coming back, and wrecking havoc, that suspicions hovering over one’s friends, neighbours, even family, is a constant facet of daily life in Timmony’s world.

The writing was VERY smooth, flowed incredibly well, and the prose was very efficient, accessible, and polished.

The pace is fast, sometimes breakneck, with plenty of blistering action for those who like their fight scenes intense, and featuring a good dose of magic or fantastical creatures as the opponents.

What I wanted a bit more was a personal taste thing. As I noted, Timmony has assembled a truly intriguing cast of characters, including clear goodies, clear villains, and some appropriately morally grey ones. They all felt distinct, and there was a lot of nuance to them – I just wanted to know a bit more about them, hence the .5 score away from a full five star rating. Credit to Timmony that I was so interested in the players he had brought to the stage.

I will definitely be picking up future books in the series, and am yearning to get a bit more depth to some of the wonderful characters Timmony has created. But if you prefer your fast paced books, there is certainly more than enough character development that will no doubt very much please those types of readers who want to keep burning through pages.

Many things make “The Wheel of Time” series so iconic. Here are some of them for me: Jordan’s storytelling is amazing, and one does not necessarily have to be a swords and sorcery fan to enjoy the books; the magic system is fabulous; it’s a true coming of age tale as we see characters grow and evolve over a long period of time; finally the worldbuilding is rich, and combined with the lore gives it a feeling of grandeur.

I see a lot of these characteristics in Timmony’s craft, and I mean that as a compliment. While it is clear Timmony has drawn inspiration from Jordan, his work is no imitation, yet the fact I mention the two authors together tells you how highly I think of Timmony’s potential as a writer.

Timmony is setting a very tall bar with his debut, and I have no doubt that as he evolves as an author he has the potential to ascend even higher.

“The Blood of the Spear” was an excellent debut, by an author who writes like a veteran wordsmith. Definitely recommended! 4.50 stars!

Check Out Or Other Reviews