Home » All Reviews » Review – THE BIG SHEEP by Robert Kroese

“There’s no consensus in the mental health community on how to maintain the sanity of a person whose whole existence is fictional.” 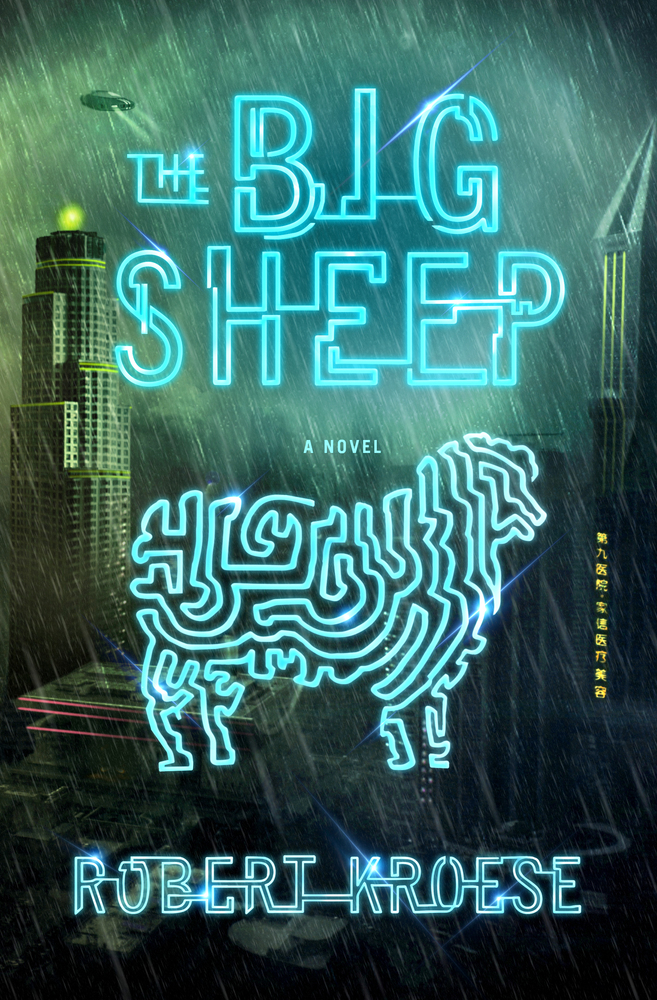 THE BIG SHEEP by Robert Kroese is probably the funniest detective novel I’ve read since Bubbles in Space: Tropical Punch by Sarah Jensen and may actually be even better, though it’s a tight race. Fundamentally, there’s just something about cyberpunk and noir detective fiction that goes together exceptionally well. It worked very well in Blade Runner and I’ve never stopped enjoying stories where the Big City was a place full of high tech gizmos as well as dirty cops. It’s the same reason I love the Easytown novels by Brian Parker. So with that introduction, I begin my review of this book: I love it.

The premise is Holmes and Watson-esque duo Erasmus Keane and Blake Fowler was private investigators (though Keane preferred a more elaborate title) in the post-Collapse world of 2039. The Collapse was when a good chunk of Los Angeles fell to anarchy like the opening of Demolition Man and was walled off like Escape from New York.

This book is full of oblique and less than oblique references like that and it’s part of why I really enjoy it. Either way, our heroes receive a peculiar pair of cases in a missing genetically grown sheep named Mary as well as a beautiful star named Priya Mistry that insists that someone is trying to kill her.

As befitting neo noir fiction, both of these cases turn out to be far more closely tied together than might initially be assumed. Mary the Sheep is a marvel of science but no one knows why someone would want to steal a buffalo-sized sheep. Even if she’s a very attractive sheep as Keane conspiratorially alludes to the widow of a deceased worker at the laboratory. Might that have been the motivation? No. Though Keane thinks it’s hilarious to insinuate that it is. That’s the kind of person that Erasmus Keane is.

The funniest thing about The Big Sheep is that it isn’t a comedy book. It is humorous because everything is played so incredibly straight. There’s a buffalo sized sheep, clones, Lord Humungous style warlords, and social satire about how Hollywood actresses often have only four or five years of shelf life before they’re put down in a most literal manner. All of it merges together in something absolutely ridiculous and yet entirely coherent.

The characters are extremely likable, interesting, and deal with their circumstances (extreme as they are) in a believable manner. The story can get surprisingly bleak at times with some of the villains getting away with their crimes, characters unexpectedly dying, and other twists you wouldn’t expect from such a fun light-hearted novel.

I strongly recommend this novel and I immediately picked up the sequel after finishing it. If you are a fan of detective novels, sci-fi, cyberpunk, and just oddball premises then this is certainly going to be right up your alley.