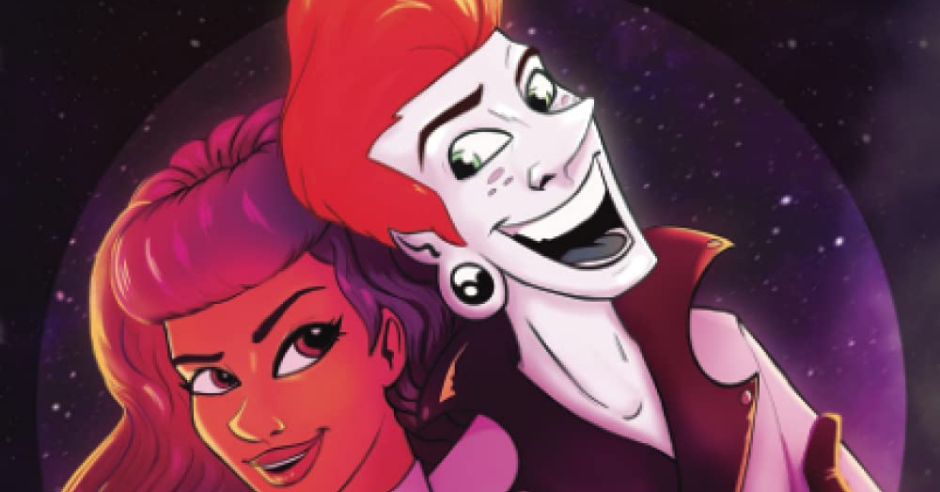 By Beth TablerAugust 23, 2021No Comments

“Squeeze their very souls from their bodies and then fine them for not applying for a soul-release license.”

Carmen Loup recently released the third and final book in their The Audacity trilogy of sci-fi comedy novels. As a lifelong fan of The Hitchhiker’s Guide to the Galaxy – and an Adams-influenced sci-fi comedy author myself – I fell in love with the first book when it was released back in 2019. Loup perfectly captures the feel and tone of the Hitchhiker’s books, while pivoting enough to do their own thing and to keep things fresh and modern. It is a must read for any fan who is looking to scratch their Douglas Adams itch, and who didn’t really much care for Eoin Colfer’s well-intentioned technical sequel And Another Thing…

But, to get to the point, I’ve collated my reviews of the past two Audacity books below, followed by my review of the latest. I hope you consider jumping into the series, because if you do, you’re gonna have a blast.

Carmen Loup’s The Audacity is the book I’ve been looking for for a long time.

Now, I’ve said this before, and I’m going to say it again: when people review Sci-fi/Fantasy comedies, they inevitably fall into the trap of comparing them to Douglas Adams or Terry Pratchett, because they really lack any other significant frame of reference.

… I’m going to fall into that same trap, despite my self-awareness. That’s because you can see incredibly clear strands of Hitchhiker’s Guide DNA in The Audacity. Right down to the very initial set up of the story.

But Loup takes that set up and lovingly pivots it into its own unique tale filled with bright, colorful, and snarky characters and a fun, insightful (and, indeed, inciteful) voice that rings incredibly true to an Americanized Douglas Adams (that is, lacking in British poise and restraint).

There are times in the middle where the story meanders and seems to just be taking its time in lieu of advancing a narrative, and some might find a few of the fourth wall breaking jokes to be a bit much for a novel. But Loup’s narration, descriptions, and hilarious world-building really made those concerns moot for me.

The Audacity is simply an amazing sci-fi comedy from start to finish and feels like a love letter to The Hitchhiker’s Guide to the Galaxy and, indeed, to all its fans. This, and anything else Loup touches, is an instant buy for me. We’ve been lacking in these kind of books for years, and, frankly, I need more.

Carmen Loup’s The Audacity was one of my favorite books of 2019, being the spiritual follow-up to The Hitchhiker’s Guide to the Galaxy that I’d been looking for for a while. It had everything: fun and clever humor, weird concepts, and outlandish, but endearing characters.

I’m happy to report that The Audacity 2 continues the trend. It picks up a few months after the first book ends and we get to catch up with Xan, May, and a host of new, delightful characters as they race to try to stop Chaos once again in a thoroughly enjoyable adventure.

As much as I enjoyed the book, I can’t help but feel a little disappointed that the plot revolved once again around Chaos’ evil schemes, and was hoping to see something a bit different and a bit more fresh. Her plan in this book involves time travel (not a spoiler because just look at the subtitle) and is a little more tough to put a finger on than in the first book. We also don’t really see much of her, and that makes her feel like more of a physical obstacle than a developed character.

All that being said, while Chaos and her plans don’t feel super detailed, a lot of that time gets spent on the relationships and humor between the existing and new characters, which is where this book really shines. The humor and style is zanily consistent with the first book and just oozes the same snark, imagination, and charm that I love.

Overall, a very enjoyable read, and I’m eager to see what’s in store for Xan and May in the 3rd installment, although I hope it will expand their world a bit more.

The Audacity 3: Be Kind, Rewind

It’s been about 2 years since I read the first Audacity book, and what a hell of a two years it’s been. At this point in time, after everything that’s happened, the third and final Audacity book is exactly what I needed.

If you’ve read the first two, you know how they read, and The Audacity 3: Be Kind, Rewind is happily more of the same. It is queer, technicolor, sci-fi joy swaddled within the confines of a book. Xan, May and the wonderfully fun characters from the first two books, return, of course. But this time, the titular ship of the saga is nowhere to be found and goddess of Chaos is no longer the primary antagonist. Instead, it’s the glowing green fungus that has taken Xan’s brain hostage and won’t stop growing until he’s dead.

All of this combines into much more personal stakes than either of the previous adventures. And after hanging out with characters I could call my fun, bizarre friends for two books, this transition made the book all the more compelling.

But don’t worry, all the wacky galactic fun of the past two books is present as well, albeit tinged with the subtle melancholy of mortality – both for Xan and the series itself, since it was halfway through the book that I realized this was going to be the endcap of the trilogy.

The ending, which I won’t spoil here, is, like the rest of The Audacity series, very much in line with the tone and style of its obvious direct ancestor The Hitchhiker’s Guide to the Galaxy. It mashes up the mysteries of space-time and the philosophy of existence with bizarre absurdism and mundane, yet compelling interpersonal relationships.

But where Douglas Adams’ seminal work always had a sense of nihilistic cynicism about it to the (quite) bitter end, The Audacity eschews that approach entirely and instead opts for hopeful, loving optimism.

And, in no slight to Adams, I think these days, we could use much more of the latter than the former.

Read The Audacity series. You surely won’t regret it.