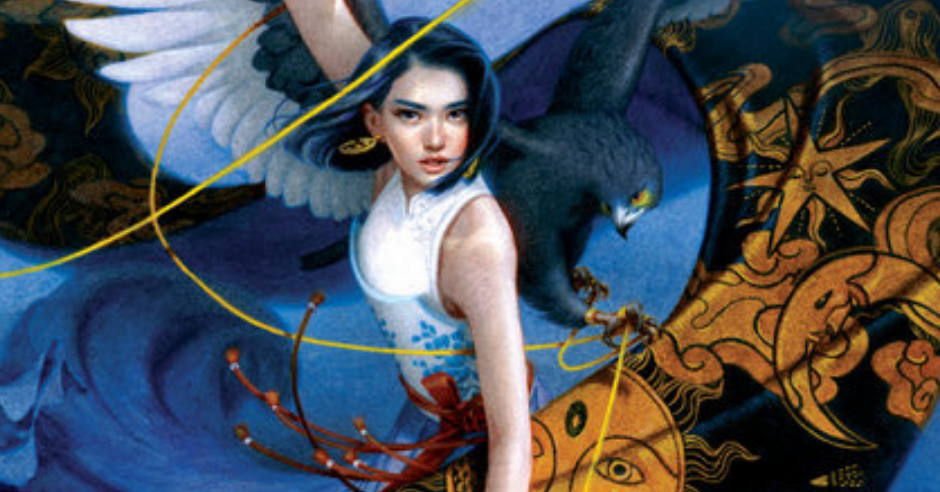 “Seize the wind,” I whispered. “Don’t become the kite that never flies.”

Spin the Dawn is a Y/A fantasy novel that has been billed as “Project Runway meets Mulan,” but that description doesn’t go nearly far enough. Granted, the premise is remarkably similar — a young girl who passes as a boy in order to save her ailing father when he is summoned to serve the Emperor — but Lim’s story of a young woman posing as a candidate for the job of Royal Tailor has more depth of character, more intrigue, more adventure, and especially more magic than a Disney movie can provide.

To begin with, Elizabeth Lim gives her heroine Maia Tamarin more agency in choosing to go undercover. When the book begins, Maia’s family is in tatters. Her mother is dead, her brothers have gone off (or leave shortly after the first paragraph) to fight in the war, and almost certainly will not return. Her father’s depression has made him too ill to function, and the once-respectable family tailoring business is in shambles. Maia spends all of her time working to keep the family fed and avoiding the bullying neighbor who wants to make her his bride. When the messenger comes to take her father to the court of the Emperor to compete for the job of Royal Tailor, Maia knows that there’s no way he could win the title in his present state, but also that it would certainly mean her father’s death.

All that said, Maia is not a martyr who goes to court only to save her father, and this is what I mean when I say Elizabeth Lim gives her heroine agency. Maia loves sewing for its own sake, and she knows she’s good enough to take over the family business — if only women were allowed to do so. Maia is ambitious and smart. Before putting up her hair and dressing in her brother’s clothes, she spends some serious time thinking about her options and planning her escape. She weighs the pros and cons of going (and possibly facing death) and staying to live a life that, for her, is no life at all.

Once Maia gets to the court of the Emperor the book explodes into a colorful, magical, dangerous political intrigue. Because of course, among the nobility, nothing is as it seems. The contest is more than a contest, a dress isn’t just a dress, a pair of scissors seems to have strong opinions, and the butterflies-in-your-stomach-inducing court magician is a lot more than he seems. As her competitors for the job of imperial tailor are whittled away, Maia finds herself with less freedom rather than more. When people claiming to be friends approach her from unexpected quarters she has to decide who she can trust and who she can’t.

Spin the Dawn is full of gorgeous clothes, gritty adventure, family tragedy, and slow-blooming romance. The only complaint I had was that while a lot happens in the book, the storytelling sometimes just skims the surface of the main characters’ inner journeys. I understand why; this is a Y/A novel, and if adolescents truly are the audience, the author might not have wanted to dig deep into the emotional devastation of losing two brothers to war, or how a life of slavery might impact a person’s psyche, but to this adult reader it felt like Elizabeth Lim was sometimes giving her characters’ inner lives the short shrift.

That said, this book is full of the things I love most: culture, mythology, and magic. If you are a fan of Naomi Novik, Katherine Arden, or Sarah J. Maas, and are looking for something similar, but perhaps a little less “adult”, then this is a great alternative for yourself or as a gift for younger readers. It has all the magic, lore, romance, and adventure of those books, but is aimed at a younger, more adolescent audience.

Review – The Past is Red by Catherynne Valente

I am a freelance writer, editor & content provider. Formerly social media manager and editor of the blog for RRKidz Reading Rainbow, I have had the privilege of interviewing a lot of cool writers and artists, working with inspiring activists, and interacting with some truly amazing readers and parents. My favorite question to ask is “What are you reading?” and if the answer is “Nothing, I’m not much of a reader.” I take it as my personal challenge to find the perfect book for that person.

When not writing or reading, I am a hiker, backpacker, nature-lover, T.V. watcher, armchair philosopher, and story addict. I am also (if you’re interested) a member of the board of directors for Pacific Reentry Career Services, and for One Spark Academy.