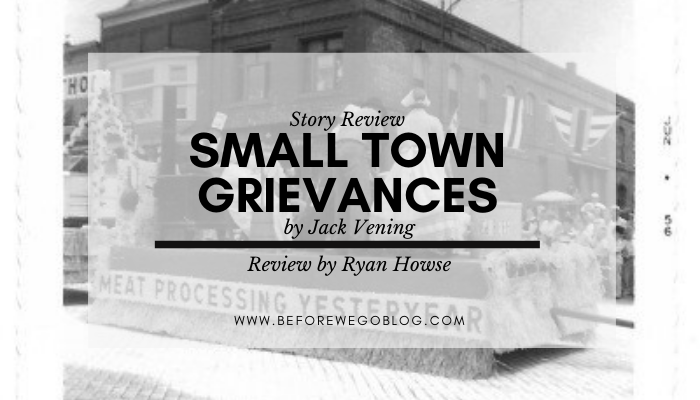 By Ryan HowseSeptember 20, 2020No Comments

“We shouted foul things never uttered before on Earth, things our minds had no way of processing.”

“Short, monthly correspondence detailing the arcane mysteries of a nameless town” written as a serial collection of stories.

You can find the stories here.

Small Town Grievances by Jack Vening is a hilarious book of bullet point complaints from an unnamed town. Said town is an absurdist trash heap, a place where $200 is required to find a man who keeps coughing over the radio, and the sick children in the hospital have to eat sand.

Each of the grievances is a paragraph at most, and most sections contain less than ten of these grievances. By its nature, this is a quick read.

The tone is close to the popular podcast Welcome to Night Vale, but it lacks even WTNV’s morals (and morale, for that matter). Welcome to Night Vale has a cast of characters; this has a list of names with weird things happening around them. WTNV is often about how even these outcasts and misfits can band together to make things better. Small Town Grievances doesn’t have that kind of optimism.

The closest thing to a recurring character is the mayor, a man introduced by the following grievance:

Against all advice, Mayor has developed another tan. It is deep and worrisome. Citizens grimacing and closing their eyes as he passes close by. He smells like a lit match and his little blue eyes unfocus as he tries to think through even the most basic problems.

The grievances are all about this length. By themselves, they’re fine. Read all together at once they create a sense of both distancing and familiarity, a tension between the parts that feel unreal and the parts that feel all too real. In short: hilarious.

There’s very little in the book that involves continuity or keeping track of characters. The characters such as they are are so broad and designed for the gag that there’s no pathos to be had. That’s not a bad thing; it’s just clearly going for absurdist humour.

Good news: friendless Lionel G. is again having visions every time he consumes too much salt. Anyone who visits his shack bearing a gift of red meat will have their fate read so long as they’re able to withstand the cruel language Lionel G. uses in daily speech.

The humour sometimes comes from the squalor, but it’s at it’s best when there’s a slight tinge of sheer otherworldly horror mixed in. My favorite sequence came near the end, at what is the closest to a major plot point: the death of the mayor (only to find out, a couple paragraphs later, that the mayor was just in the next town over.)

But then, of course, before we could go to ballots, at the very height of our grief, came the turn: multiple reports that Mayor had just been seen, alive. He was eating a big banana split at the expensive ice cream place over in Hindenberg, evidently spending the last of his pocket money on his way back from holiday.

A quiet moment, utterly still, before a great ruckus broke out. We run to our cars and raced to Hindenberg to confirm the news. There he was, sap-mouthed and confused. And when we were sure it was really him, that he was alive, we broke him.

We pulled him into the street and filled his shirt with trash. We dragged him through the mud and made him drink puddle water. We took out loans in his name as he watched, helpless, from the street outside. We shouted foul things never uttered before on Earth, things our minds had no way of processing. We warred through the sunset and into darkness, and then with nothing left in us but these animal-thoughts, we simply lay were we stood and slept until morning.

If you’re looking for something short, absurd, and easy to read in the midst of doing other things, I recommend it highly.

The complete Small Town Grievances can be found here: