By maedbetweenthepagesSeptember 7, 2022January 28th, 2023No Comments

Home » All Reviews » Review – Sky Breaker: Tales of the Wanderer 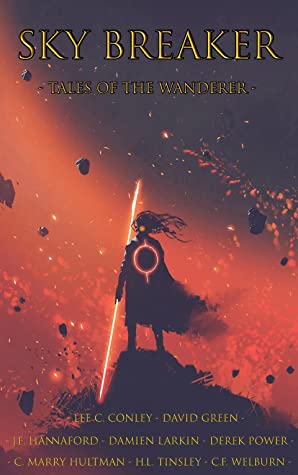 I would highly recommend this collection of stories to anyone looking for a uniquely cohesive anthology experience and those who have an interest in cosmic horror.

Taylor from Maed Between the Pages

It’s quite rare that I give an anthology five stars as the nature of story collections is that some will work for you and others won’t; and while I do have favorites in Sky Breaker, none of the stories felt like a weak link.

All of the authors in this collection are given a premise: that portals have opened up all over the planet and there is some malevolent force behind that desires to be free that people call The Wanderer. The plethora of different tales that come from this one base idea is fascinating. Some are dark and vicious or mournful, some take place in the raging sea on the backs of whales or in desolate wastelands, while others get you to chuckle when someone throws a shoe. I was filled with excitement with each new story…what world would I get to visit this time?

“He raised his gaze skyward. Instead of the flickering red and purple aurora that  decorated spring skies like sparkling gems, a rent in the fabric of the sky yawned across the horizon.” – Darkwhale by J.E. Hannaford

Some standouts for me:
Swampers by C.F. Welburn.
The first story in the collection and it still stuck with me until the end. The world building contained within these few pages is masterfully done and I found myself wanting to read more about this place despite the bitter story told. We learn of secrets long kept, betrayals, and the inevitability of human nature as we enter a universe where the portals have been harnessed for trade between nations.

Topher the World by Derek Power.
A much needed chuckle in the midst of many other serious stories. Sometimes it’s a joy to read from a main character who doesn’t take themselves too seriously and that is done beautifully here. But don’t let that tone fool you, there is also a fantastically written battle scene in the installment as well…I felt like I was watching an anime.

Stormchild by Lee C. Conley.
Everyone who watches my booktube channel knows that I have a morbid fascination with the sea- you won’t find me anywhere near it in person, but I’m obsessed with all forms of media about it. So when I learned that this story dealt with a captain at war with a leviathan at sea, I knew I would be hooked. Themes of obsession and revenge give this tale a dark tinge that lingers. I was also very impressed with the descriptive writing. I felt I was on the ship witnessing the battle for myself.

I would highly recommend this collection of stories to anyone looking for a uniquely cohesive anthology experience and those who have an interest in cosmic horror. Will definitely be purchasing a physical copy for myself!

Reviewv- Across the Green Grass Fields by Seanan McGuire