Review – Seekers: The Winds of Change by Troy Knowlton

Home » All Reviews » Review – Seekers: The Winds of Change by Troy Knowlton 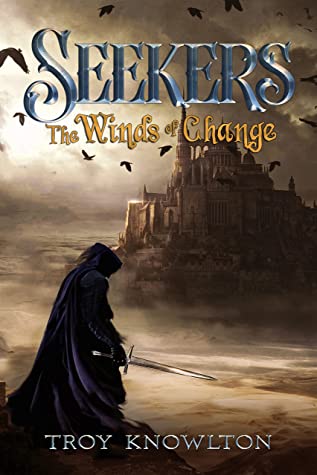 If there’s one thing I love about reading fantasy, it’s coming across a new to me or debut author , with a fresh voice to give to the community. Recently I was offered an ARC of Troy Knowlton’s self published debut novel in exchange for an honest review and all I can say is that I’m really glad I accepted.

Told through two main POVs, The winds of Change follows a cast of characters as they attempt to find a Conduit and stop a secret war from brewing. All the while, chaotic and relentless winds of change are blowing through the land of Tiarna, tearing through not just the landscape, but also the minds of those who inhabit it. Full of dangerous enemies, treachery, betrayal and romance, this is a solid debut from an author who I strongly feel has true potential to be a popular author in the fantasy genre.

My favorite character in this book would have to be Oren. I really admired his character arc and how he grew throughout the novel. When we first meet Oren, he is a quiet and reserved character who doubts himself and his purpose. By the end of the book we see Oren truly come into his own and his bravery and smarts really shine through. I think Troy Knowlton did some amazing character work with Oren and really explored who he was as a person. The setting was also well layered and I thoroughly enjoyed the tidbits of lore we got throughout the book. The story didn’t feel dense or overly complicated; in fact it was a pretty light read which was perfect for the tone of the book.

To be quite honest, I wasn’t the hugest fan of the romance side plots but it really didn’t deter me from enjoying the heck out of this book. Troy Knowlton knows how to make his characters POP off the page and they have real human interactions. They hurt, they love, they rage. It was fantastic to see.

One thing I wasn’t expecting in this book but that I really appreciated was the gender issues and LGBTQIA+ themes that were discussed in the book. One of our female characters is the daughter of a High Commander and as such, there are things she is expected to do and things she’s not allowed to do. However, she challenges this every step of the way and doesn’t hider her feelings on how dumb and outdated she thinks those rules are. There is also a male character who is her guard, and who secretly is gay. he is forced to hide that part of himself because there’s blatant homophobia where he’s from, but the other characters encourage him to love who he chooses and to not be shamed of his true self. there were some very good discussions about these topics littered throughout the book.

Overall, I feel like this is the perfect book for readers who want to dip their toes in the fantasy genre, or readers who like their fantasy to be more on the simplistic side. I believe Troy Knowlton shows true promise, and I am more than eager to continue this series and to pick up more of what he writes in future.

Buy Seekers: The Winds of Change from Amazon

Just your local nonbinary bookworm who decided to pick up a camera one day and ramble about her passion for books.⠀ ⠀ I love to read a little bit of anything and everything and am forever just blown away about the amount of talent there is in the book community. ⠀ I’m a mom of one awesome 3 year old boy and the wife of the funniest man in the world. Also a cat mom to my two-man bois Parmesan and Cheddar. ⠀ My other hobbies besides reading include gaming, cooking, and drinking copious amounts of coffee