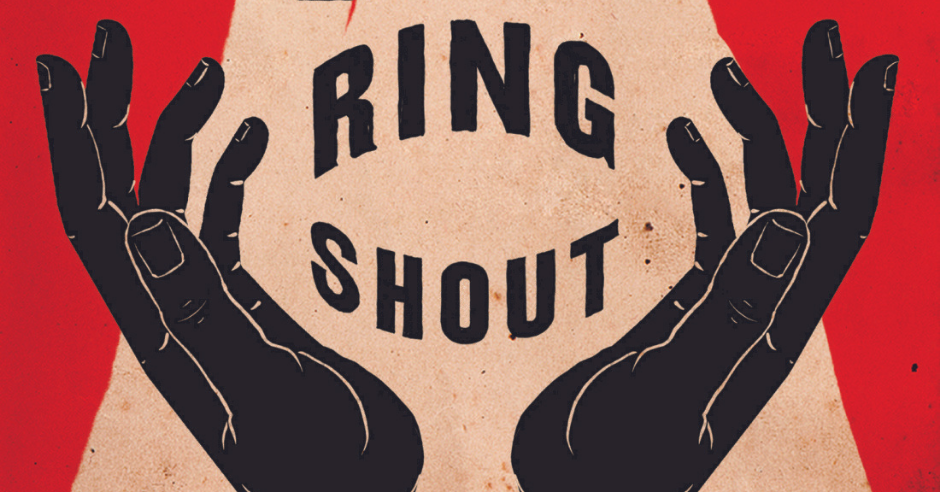 “Girl, every choice we make is a new tomorrow. Whole worlds waiting to be born.”

Well, how appropriate for the tumultuous year that 2020 has been, not only in terms of the global pandemic, but also because of the notable racial unrest seen particularly in the United States, that my last book review of this unprecedented year is “Ring Shout”, by the highly decorated author (Hugo and Nebula Award Winner) P. Djèlí Clark.

I will say, foremost, that books like this are always difficult to read as a racialized Black man, reader, and author myself. I can imagine there must have been moments for the courageous Clark – never one to fear confronting the difficult subject of racial intolerance – where it was difficult to write, considering today’s context.

In “Ring Shout” Clark has written essentially a historical horror-fantasy. The genius of Clark is on full display in this novella. This cleverly-written book likely conjures up images for many of us Black people of how Blacks in Western Society have felt, while under terror and oppression of racism: like we are beset by monsters, driven by a hate that seems so unfathomable, so non-sensical, it must be alien / from another world. Still, “Ring Shout”, an extremely important book, should be read, as often the most difficult books to read are.

The novella is set in 1922, which is deep in the Jim Crow South era of the early 20th Century. In Ring Shout, the plot centres around the film “The Birth of a Nation”. You will forgive me, please, as I digress into more about this film, which has been typically acknowledged as “the most controversial film ever made in the U.S.”

Its plot, not unlike “Ring Shout” itself, could be considered part fiction and part history. The film tells of the assassination of U.S. President Abraham Lincoln by John Wilkes Booth. It also outlines the Civil War and Reconstruction eras, from a staunchly pro-Confederacy standpoint. Blacks are depicted as idiotic, buffoonish, depraved, slavering rapists of White females. Most of the blacks portrayed in the film are played by White actors in Blackface.

The Ku Klux clan in “The Birth of a Nation” are represented as akin to “Knights in Shining Armour” who preserve the virtue of White women, uphold American ideals, based on a social order of White Supremacy, by cleansing the U.S. of the Black “scourge”. The film was deemed to be responsible for the rejuvenation of the Ku Klux Klan, and thus a reign of violence against Blacks that lasted into the second half of the century.

In “Ring Shout” the reason the Ku Klux Klan can maintain its horrible rule of terror is primarily because there are inhuman, demonic members of the Klan who serve alongside the human members. The Alien Klansmen, called “Ku Kluxes”, purposely stoke the human Klansmen in their racial hatred of Blacks, perpetuating the power of the overall Klan, and their ability to terrorize Blacks. When “Ring Shout” begins, another screening of “The Birth of a Nation” will take place in Macon, Georgia, which will be a nexus for an even more sinister plan, driven by the Ku Kluxes.

The protagonist of the story is a young Black woman named Maryse, who hunts the Ku Kluxes with a magical sword. She has a band of helpers, including wonderful secondary characters such as fellow monster-hunters Sadie – a military veteran and sharpshooter – and Chef – an explosives expert. Maryse is also assisted by paternal figure, kind but capable Uncle Will, and Nana Jean, a Gullah woman and maternal figure to the orphaned Maryse. The book also features the “Aunties”, omnipotent figures who represent the magical “good” side in the fight against the Ku Kluxes.

This book is bloody, frightening, and memorable in the way a Stephen King or Dean Koontz will leave the reader haunted by the eerie images given long after they put down the book, specifically because of the monsters that haunt “Ring Shout”. But what will truly resonate with many readers is how Clark handles the subject of hate in the novel. Hate, when it comes to racism, Clark seems to remind us, is a two-sided coin. The Blacks who are being hated, can easily, and righteously, be motivated to hate the Whites who commit atrocities against them. But the message by Clark appears to be that the same hate can be a weapon used against both sides, with the most damaging of results and implications for humankind. When we forget that, in the end, people of all races are truly one unified human race, and begin to turn against each other in an endless cycle of hate, only hate emerges victorious, and we humans are merely condemned to more suffering.

“Ring Shout” is only about 180 pages, so I gobbled it up in two nights of reading. But its lack of size does not mean it does not pack a gut-punch to the senses. The fight sequences are heart-stopping, the social commentary is unflinching, and the horror element of the book, as I noted, is downright creepy. It is a masterpiece, I loved it, and it was fun, even with its serious subject matter. The characters are complex and wonderful, the setting is rich and imaginative, and Clark writes with dark humour, elegance, and ease. He is a top-tier author in any genre, and I highly recommend “Ring Shout” as a fantastic read.

I cannot think of a better way to close out 2020’s reading with this marvellous, frightening, momentous, novella, which was very appropriate for the year that was. Ultimately, Clark, in his book set in 1922, leaves us with hope for the future, which is thankfully what we also seem to have for 2021. Here’s hoping for more peace, unification and reconciliation among races, political opponents, genders / non-binary, creeds, social groups, religions and faiths, etc. across the world in 2021, and beyond.

Review -The Haunting of Tram Car 015 by P. Djèlí Clark