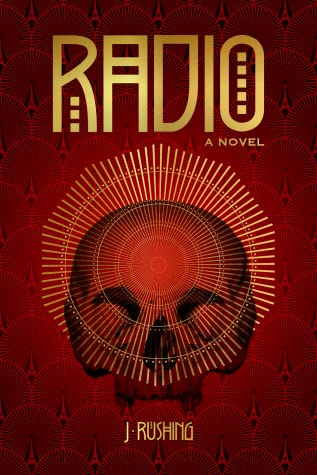 “Radio by J Rushing is an interesting two-headed beast of a book.”

Amid the music, lights and energy of 1928’s Paris, something sinister pulses through the æther. The Radio of the Gods manipulates minds across the continent and its creator, the arrogant god Marduk, will sacrifice everything to keep his kind from perverting his masterpiece.

Attempted treason and bitter betrayal force Marduk to escape into a new, unknown body. Worse still, the previous owner, an opium-addicted jazz guitarist, is still inside.

Desperate, drug-addled and fighting for control, Marduk is forced to rely on the few friends he has left – and one terrifying enemy — to see his mission to fruition. If Marduk and company fail, the gods’ vain machinations will destroy everything they’ve built, including civilization itself, all made possible by his RADIO.

Radio by J Rushing is an interesting two-headed beast of a book.

On one hand, it feels in a lot of ways like a standard urban fantasy. Our protagonist is a Broadcaster named Marduk who used to be worshipped as a god. As the book goes on, there are descriptions of exactly what Broadcasters can and cannot do. They have some control over other’s minds, and they can leap between human bodies, and survive through possessing them.

To be clear, though the book has Artemis, Apollo, Marduk, Lilith, and other mythical or divine names, outside of their names none of them have any real connection with their counterparts. Apollo has no control over the sun. Marduk has nothing to do with Babylon save that he used to be worshipped there.

In 1928 Paris, Marduk has invented a radio, but he wants to be cautious with its use. It should work, he believes, to improve the other Broadcaster’s lives, but Apollo and Artemis in particular want to use it to dominate regular humans. Marduk believes such a use of his Radio would break apart the Mentium—the coalition of Broadcasters—for good, and alert all regular mortals to their existence.

Marduk gets betrayed early on because he won’t agree to help the others. Nearly dead, he uses his powers to leap into a new body, but he doesn’t have time to pick who it is, and he ends up in an opium-addicted jazz musician named Del.

The more the book leaned into the setting, the stronger it became. Early on it felt like the Broadcaster wars could be happening at any point in time and it just happened to be 1928 Paris. Paris was exquisitely described (and indeed, the author lived there) but it felt arbitrary.

The longer the book went on, the more the setting and the plot merged until it felt as if there was no other place or time this book could have taken place in.

The opium-addicted angle early on felt as if it would be simply ignored. Marduk had the willpower of a god and could simply refuse Del’s yearnings. I was wrong on that—it went through the specifics of the addiction, and all the symptoms of both using and withdrawal.

Marduk himself is a hard protagonist to like. He’s focused on the big picture at the cost of individuals. He has little concern for Del’s life save that he’s trapped in it as well. The counterpoint to this is Bernard, Del’s roommate, and the two play off each other well. Bernard wants Del back and he’ll do what he must to help Marduk to that end. Yet as Marduk concedes his own limitations, including to the opium addiction, he becomes more approachable even if he never truly softens.

I really enjoyed Radio, and I’d recommend it to anyone looking for something a little out of the ordinary.

I like, in no particular order, tabletop gaming, board games, arguing over books, ancient history and religion, and puns.