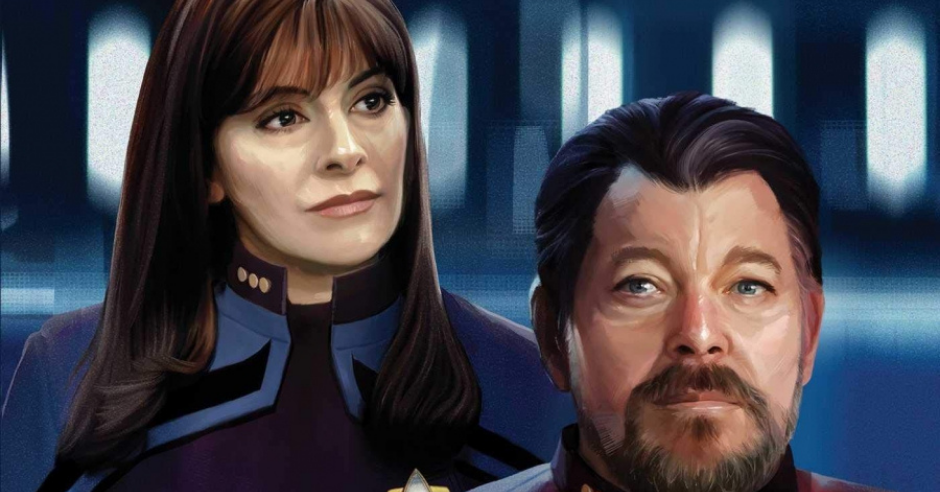 this is a good Star Trek novel and would be appreciated by both U.S.S. Titan as well as Picard fans

PICARD: THE DARK VEIL is a great Riker and Troi story. I am a big defender of the STAR TREK: DISCOVERY, PICARD, and LOWER DECKS series. However, if I had to choose between them then I’d probably say that Picard is my favorite of the three. It has the most interesting premise and ideas to develop. Indeed, my biggest issue is that I felt the first season was far too compact and that it needed another few episodes to detail all the various concepts it was dealing with.

I was a big fan of THE LAST BEST HOPE and felt it really could have been the basis for those extra episodes. Una McCormack took the time to expand and explain the political situation and build-up in a way that helped the story breathe. I was wondering if something similar could be done with THE DARK VEIL as James Swallow (who I mostly know from his Star Trek: Titan novels) follows the U.S.S Titan into the events of Picard.

The premise of this book is that the U.S.S Titan with Captain Riker and Counselor Troi are dealing with the fact a Federation ally, the Jazari, are suddenly leaving the Alpha Quadrant in a generation ship. Something has horribly spooked them and the Federation is left clueless. This is also just a year after the horrific Mars attacks, Synth Ban, and failure to evacuate the Romulan homeworld. After a space disaster leads to the Titan rescuing the Jazari ship, an unexpected alliance occurs between them and a Romulan warbird. Everything promptly goes to hell afterward.

The Dark Veil feels like a combination of the Titan novels and the Picard era, which is an interesting fusion that I would be interested in seeing more of. Certainly, novel character Christine Vale shows up and I’ve always supported her in more properties. I’m still hoping she’ll be canonized by Lower Decks. Really, it feels like a mixture in ways both subtle as well as overt. The Jazari are the kind of species that feel very much like a Titan creation. They are alien and “big” in a way that novels can do in ways that television can’t (or is very hard pressed to) as well as alluding to past history that the shows rarely do these days. I figured out their secret fairly early and it’s a bit on the nose but Star Trek has rarely needed to be subtle about it’s themes. Arguably, Picard could have done more with its themes like this.

I also appreciate the use of the Romulans in this book as we get a nice mixture of “honorable soldier”, “sneaky KGB Loyalty officer”, and “insane death cultist.” Some people had issues with the Zhat Vash when it was introduced in Picard but seeing how the Admonition utterly breaks someone’s mind like a Lovecraftian Cthulhu cultist actually helps underscore what the show only hinted at. The Romulans are a race that lost a lot of menace with their transition to The Next Generation, being supplanted by the Cardassians, and I feel this book does a good job of restoring how terrifying they were supposed to be.

The book also effectively uses foreshadowing and canon to hang an ominous cloud over all of its events. Thaddeus Riker is an adorable child that we know for a fact is not going to reach adulthood. The fact the Romulan system has about a year left before 900 million residents die is also something that hangs over the heads of each of its residents. Using that helps elevate the material as we know there’s no good ending to all this. The fact the Jazari choose to make the decision they do also underscores just how badly the Federation has screwed up. Even if banning synth research is something you’re doing because you’re afraid of making slaves, some races are going to take it personal.

In conclusion, this is a good Star Trek novel and would be appreciated by both U.S.S. Titan as well as Picard fans. I preferred The Last Best Hope but that was more due to the fact that it got heavier into the politics of the event. This is a more pulpy space opera adventure that I also like but not quite as much.