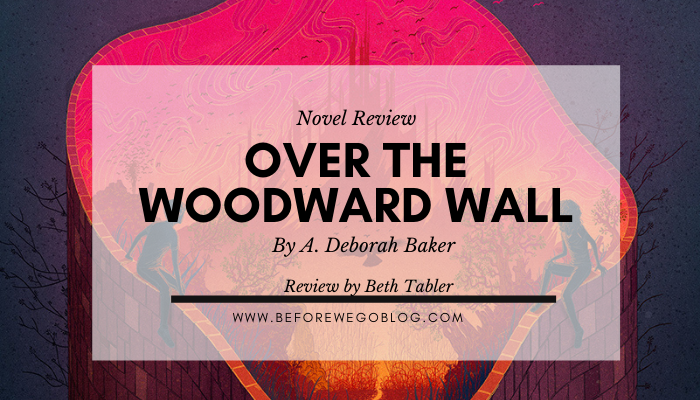 Review – Over The Woodward Wall by A. Deborah Baker

By Beth TablerOctober 6, 2020No Comments

A Morning Unlike Any Other

Over The Woodward Wall

by A. Deborah Baker

“It was a morning unlike any other. It was simply that no one had realized it yet.”―

A. Deborah Baker, Over The Woodward Wall

Honestly, I wasn’t even aware of the connection until I had an a-ha moment about halfway through the story. You don’t need to have read Middlegame to appreciate Over The Woodward Wall. Still, I think readers will have a fuller appreciation and understanding of the story if they have read Middlegame.

“Humans always look the same to me once they’re old enough to leave the nest. Hatchling humans are one thing, but the rest of you? Pssh.”

The story is about two children who are polar opposites of each other in almost every way. Avery, who is calm, collected, systematic, and rule-abiding, is half the duo. While Zib, who is loud, frizzy, wild, and free-spirited, is the other half of the pair. Together they balance each other and cancel each others strongest tendencies. The only thing Zib and Avery have in common is their age. That is… until a chance meeting while on a wall to the Up and Under intertwined their destinies. Now, in a land completely different than our own, the two of them have to work together because they will never escape otherwise.

Seanan McGuire is a master storyteller. If you haven’t had a chance to check out the myriad of her novels, series, and short stories, you should. She has a way about writing that is lyrical enough to dance across the pages, but substantial enough that a reader does not get lost in the words. All that being said, I don’t think this is her best work. That is a relative thing. Even on McGuire’s worst days, she still is a fabulous writer.

But, Over the Woodward Wall was missing something.

The story has a lot of good. The worldbuilding is well done. There are giant talking blue owls, waterfalls made of mud, a crow girl, and so many other fantastical things. It is reminiscent of Alice in Wonderland and McGuire’s Wayward Children series. The world is an elaborate creation, and it is believable and whimsical at the same time. I can see two children getting lost in all this.

“Neither of them could see the cliff they fell past, but if they had, they would have understood the mud a little better, for the stone was banded in pink and blue and purple, stripes of one color sitting atop the next, like something from a storybook.”

Avery and Zib are fun lead characters that balance each other well but learn to adapt to the situations as they arise. It is a good lesson for kids because, technically, this is written for children. But I think the lessons were too heavy-handed; every character Avery and Zib crossed had something to teach them, some lesson. That is generally important in a fable; it seems too much. Even fables and children’s stories have subtleties. Because it was apparent what each of the characters was doing, I could not get engaged in it as much as I would have liked to.

On the flip side, the story did not seem long enough. It felt incomplete. I wanted more. Maybe that will be realized in future books, but I ended this story slightly dissatisfied. It was a weird combination of too much info in one part of the story and not enough in another.

“A piece can represent the whole,” said Meadowsweet. “If the human child wants to hold up a branch and say it means the entire tree, I don’t see where it’s another human child’s place to stop it. Representative symbols are an essential piece of making so many things. Without them, we wouldn’t have maps, or books, or paintings. Peace, human child. Let your fellow be.”

Of course, even with slight criticism of the plot, this is a fun story. The children’s voices are engaging, and its meandering manner is thematic. You are meandering with the kids as they make their way through the world. And, even though this isn’t McGuire’s best work, it is still a fun read. Besides, I loved Middlegame. It was one of the best books I read last year, and the meta quality of Over the Woodward Wall adds another layer to the story and makes me appreciate Middlegame all the more.

If you are a fan of McGuire’s work, you will undoubtedly appreciate this. And, even though it wasn’t as engaging as I had hoped, this is still a very good story and worth the time it takes to read it.

Check Out Beth’s Other Reviews