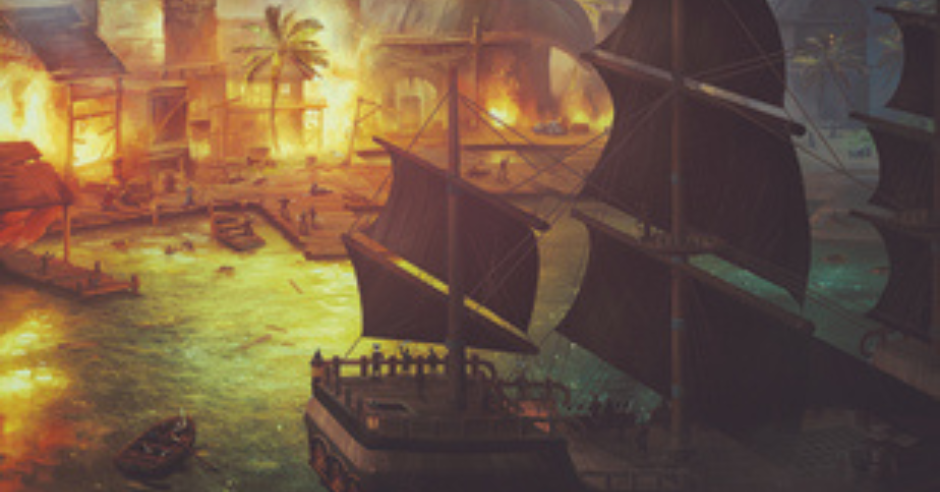 This book was obviously a worthy SPFBO champion in its day, and everyone I respect who has read Rob Hayes’ other books rave about them.

Lechery, scheming, tense battles, giant centipede pet, and mayhem on the waters! A wonderful romp through a world of piracy and intrigue! So went my third book in my #Grimdarkmasters reading month, where in the month of April 2022 I dedicated most of TBR to reading four of the most lauded Indie grimdark writers, fantasy author Rob J. Hayes being one of them. The book I read by Hayes was “Where Loyalties Lie”, the first book in a duology called “Best Laid Plans”.

This book is a monster in the self-published world, and won the entire Self Published Fantasy Blog-Off’s (SPFBO) 3rd year contest (2017), capturing the coveted Selfie Stick Award, and helping to propel Hayes to Indie fantasy notoriety. After reading it, I can see why this book is so popular, and why it managed to beat out a lot of other great books to capture an SPFBO crown.

I recently watched “The Lost Pirate Kingdom” docuseries on Netflix, and in my head if “Where Loyalties Lie” were brought to the small screen, it would look something like that. That Netflix series chronicled some of the lives of the most feared real-life pirates of the Caribbean, including Blackbeard, Black Caesar, Anne Bonny, Calico Jack, Benjamin Hornigold, and more. It was a fascinating slice of history that revealed the fact that amidst all the marauding and plundering, the pirates managed to set up a quite egalitarian pirate republic in Nassau, Bahamas, in the 18th century.

Captain Drake Morass, one of the main characters in “Where Loyalties Lie”, paralleling real-life Captain Benjamin Hornigold, also wants to unite the pirates in Hayes’ world under one banner. But instead of a republic, Morass envisions it being more of a monarchy, with him as the king.

Morass has some issues that might get in the way of his desired kingdom. He’s a wanted man by some pretty powerful enemies, seeking to kill him. Luckily, or perhaps unluckily, Morass’ brother is influential, and sends an Arbiter (described by Morass as a ‘witch hunter of the Inquisition’) to protect him. That Arbiter’s name is Beck. Beck packs a set of six pistols, deadly accuracy, nerves of steel, and alluring beauty that Drake can’t help be drawn to.

This desire of Morass’ is at the heart of the plot for “Where Loyalties Lie.” Morass, a charming, ambitious, ruthless schemer, might actually have some semi-altruistic motives for wanting to untie normally feuding and competing buccaneers. The Five Kingdoms have banned together in a mission to exterminate the scourge of piracy, and have vowed to hunt down and kill pirates to the last woman and man. Divided and vying over ill-gotten booty, the pirates don’t stand a chance against the might of the Five Kingdoms forces unless they band together to stave off annihilation.

Morass, a big-picture thinker, sees this clearly, along with the chance to earn himself further glory, riches, and supremacy.

But Morass can’t accomplish his vision alone. He needs some of the other fiercely independent and well-respected pirate captains to buy into his plan, in order for it to have a hope of success. His prime target to have as his lieutenant is another charismatic and famous captain, Kevin Stillwater, known as the best swordsmen amongst the pirates.

Stillwater has an interesting reputation beyond his swordplay – he abhors violence and attempts to mitigate bloodshed to the lowest denominator when invading and capturing ships. Stillwater’s life is complicated, and one of the biggest complications is his on-again / off-again entanglements with another ferocious pirate captain – who is the daughter of perhaps the MOST feared pirate – named Eliana Black.

Eliana’s father is the brutal and sadistic Tanner Black. Black is the biggest, baddest pirate on the seas, and if anyone is going to be lording over anyone, it’s him, not Morass. And Black seems quite willing to step over Morass’ corpse to make sure of that.

Of course, for me, the most important element of any book is the characters and boy does this one have some colourful ones that I truly enjoyed. All the aforementioned are wonderfully shaded in grey, with divided loyalties, insecurities, secret desires, inner turmoil and conflicts, and underneath all the complexities (even the horrible Tanner Black) some sense of moral code, even if it is hard to decipher.

An amazing job here by Hayes to create a character-driven book that certainly does not sacrifice the plot, because it’s all frontal, very fast-paced, full-throttle, with conspiracies, intrigue, tense and bloody nautical battles, raunchy sex, magic, superstition, and tension. Everything always seems on the edge of falling apart for the two main captains, Morass and Stillwater, as they struggle to keep hold of their own crews, get into deadly confrontations with enemies, manage their romantic relationships, and just plain stay alive, and it keeps the suspense factor high.

Be warned re: triggers – there is a rape scene, and it is fairly violent and jarring. The person who is sexually assaulted is not a powerless figure by any means; I did not find the scene to be gratuitous by any means; and it was consistent with the plot and character arc as far as I could discern, yet still hard to read.

This is in keeping with the fact that this is a very grim book, despite the excellent dark humour and moments of lighthearted banter that permeate the novel. Women and children are slaughtered, people are massacred and tortured, and the battle scenes are not for the squeamish. There is also the psychological darkness of the book, which is very well done, but Hayes does not shy away from topics like substance addiction, manipulation, religious fanaticism, and brutality.

The world building was exceptional. It was layered, and included such features that I loved such as the differences between the numerous pirate islands (the Island of Many Deaths was an awesome concept) , sea monsters, (did I mention the giant pet centipede? really creepy but very cool!) an underground race called the Durr, the Arbiters previously mentioned, which are magically endowed beings who pursue, torture, and interrogate (hence Inquisition) people they consider heretics (which Stillwater is violently opposed to, bringing him into direct conflict with Morass’ protector and object of affections, Beck, setting up some additional explosive potential). Hayes does exceptional work of painting a lush world seen largely from the waters, complete with its own mythologies, cultures, and intriguing landscapes.

To top it off, the name for one of the brothels, “The Merry Fuck” is priceless!

This book was obviously a worthy SPFBO champion in its day, and everyone I respect who has read Rob Hayes’ other books rave about them. Hayes is a fantastic writer and truly a master of grimdark fantasy, based on this book, and his reputation for excellence, and I am very happy to have finally read some of his work!

Easily five stars for “Where Loyalties Lie”, and I can’t wait to see where things go in the concluding volume “The Fifth Empire of Man”!