There is Always Hope

“And, most importantly of all, there is hope. I didn’t see it through the weeds of most of the book. It was frustrating and tiresome at times. I wanted to be blasted in the face with hope. Please give me something Wendig. Give me something to grab on to, don’t let me be pulled out to sea to drown with these characters. But hopes shining light would stick out now and again amongst the pages, muck, and mire. There is hope, that most magnificent of human emotions that leads us through tragedy and Wendig writes about it. “ 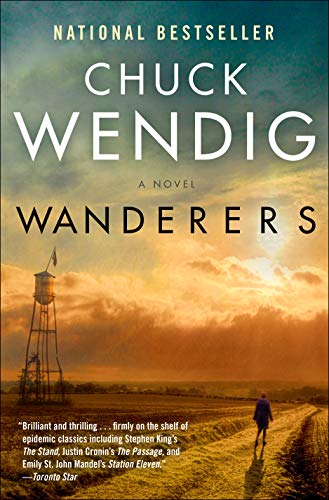 What is Wanderers About?

A decadent rock star. A deeply religious radio host. A disgraced scientist. And a teenage girl who may be the world’s last hope. In the tradition of The Stand and Station Eleven comes a gripping saga that weaves an epic tapestry of humanity into an astonishing tale of survival.

Shana wakes up one morning to discover her little sister in the grip of a strange malady. She appears to be sleepwalking. She cannot talk and cannot be woken up. And she is heading with inexorable determination to a destination that only she knows. But Shana and are sister are not alone. Soon they are joined by a flock of sleepwalkers from across America, on the same mysterious journey. And like Shana, there are other “shepherds” who follow the flock to protect their friends and family on the long dark road ahead.

For on their journey, they will discover an America convulsed with terror and violence, where this apocalyptic epidemic proves less dangerous than the fear of it. As the rest of society collapses all around them–and an ultraviolent militia threatens to exterminate them–the fate of the sleepwalkers depends on unraveling the mystery behind the epidemic. The terrifying secret will either tear the nation apart–or bring the survivors together to remake a shattered world.

One morning in Maker’s Bell Pennsylvania on June 3rd, Shana stood looking at her little sister’s empty bed and her first thought was: Nessie ran away again. This little sister is gone, having left the farm on an outing with nothing on but a dress. She is sleepwalking or as she becomes known, a walker. She begins the long walk. Nothing can deter her. Shana is not far behind. As the days pass, the group grows. They pick up walkers, and shepherds (people who help take care of their flock of walking friends and family). The whole time American and the whole world is split on what type of creature these walkers are. Are they aliens, science experiments, do they carry disease? Whatever they are, the right-wing side Kreel (Trump) can agree that there is something unholy about them and they should be stopped. Kreel goes to rallies and muckrakes against the sitting president Hunt (Clinton). How is she is not doing anything? How is she not acting fast enough and putting our children at risk? It would be perverse if it wasn’t so plausible. All of the political machinations of the two-party system tear each other apart and turn to civil war in the background of the story.

“Wanderers is a work of fiction,” reads the edition notice at the start of Chuck Wendig’s new novel. “Names, characters, places, and incidents either are products of the author’s imagination or are used fictitiously. Any resemblance to actual persons, living or dead, events, or locales is entirely coincidental.”

“As boilerplate legal disclaimers go, okay! Sure! Except with Wanderers, it’s… kind of a lie? The good kind of lie. A lie that, like Wanderers, brings truth into the light.”

Chuck Wendig is digging in his heels and drawing in some whopping lies, the parallels are too great between some of the main background characters, the characters that shape world events behind the main characters to be coincidental. I don’t mind these kinds of lies, especially right now because they buzz and resonate so hard with people living in this backward world. It makes the reactions of the characters all the more visceral and real.

In the foreground of the story, we have a few intersections of some very well thought out and interesting characters. First thing I noticed about this story is that it doesn’t feel like there are any protagonists, either that or everyone is a protagonist. No one truly is a hero. This seems like it would be wrong, but it is a very long and very well thought out story. Everyone develops in one way or another. There is so much change.

Except maybe Marcy. She kicked all ass all of the time.

Secondly, the characters are written like people, warts and all. You will like them, you want them to live. You will hate them, and maybe want them to suffer a little bit. There are good guys especially Benji, Aram, and Pete. Maybe, they aren’t always good. Wendig draws no lines in the sand. There are not amateur black and white characters. The world is full of grays. Much like real life, no one thinks of themselves as the villain. Also, I tell you this as one reader to another, this author is not kind to his characters in this book. This book is The Stand meets Nevil Shutes On The Beach with some Techno-Thriller Johnny Mnemonic stuff that is impossible to explain without spoilers. Half the time I had no idea where the hell the story was going. I said, “huh” more times than I could count.

The pacing was a real issue for me. The book was so well written chapter for the chapter but it lacked the oomph. The zing chapter to chapter that sped you along. It was slow for the first half of the book till around the 48% mark and it started to pick up the pace dramatically. To Wendig’s credit, he had a bit of a magnum opus in this book. It is a symphony of parts that came crashing together in a grand sforzando that left me stunned and unable to read much for a few days.

And, most importantly of all, there is hope. I didn’t see it through the weeds of most of the book. It was frustrating and tiresome at times. I wanted to be blasted in the face with hope. Please give me something Wendig. Give me something to grab on to, don’t let me be pulled out to sea to drown with these characters. But hopes shining light would stick out now and again amongst the pages, muck and mire. There is hope, that most magnificent of human emotions that leads us through tragedy and Wendig writes about it.

I would absolutely recommend this as a must-read. I have never encountered a Wendig book that I was not fond of, this included. The reader should be aware of the exciting and interesting, heart busting, soul-crushing time they are in for.

But remember to look for the hope.

If You Would Like To Purchase Wanderers and Wayward