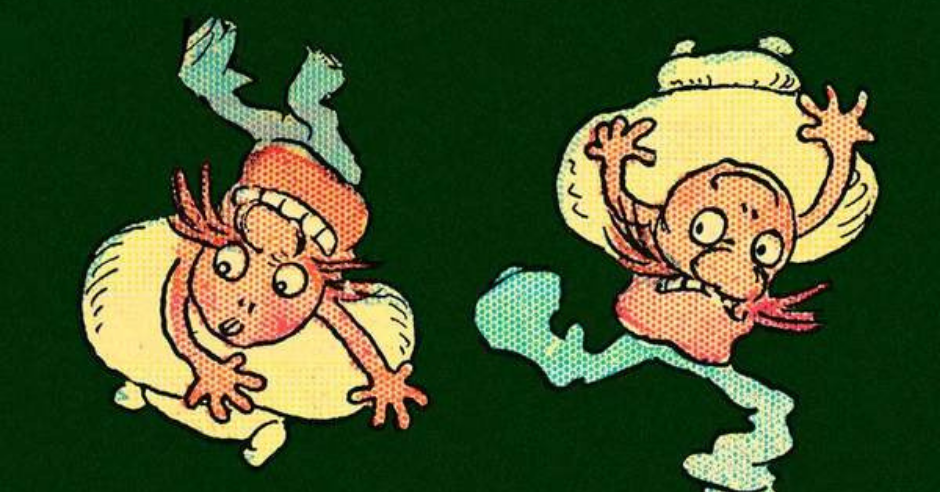 Is it upside down or rightside up?

..And flipped upside down.

From Wikipedia, “Gustave Verbeek is most noted for The Upside Downs of Little Lady Lovekins and Old Man Muffaroo, a weekly 6-panel comic strip in which the first half of the story was illustrated and captioned right-side-up, then the reader would turn the page up-side-down, and the inverted illustrations with additional captions describing the scenes told the second half of the story, for a total of 12 panels.

His signature usually appeared at the top of the first/last panel, upside down. The two main characters were designed such that each would be perceived as the other character when inverted.

Gustave Verbeek created a total of 64 of these strips for The New York Herald, from October 11, 1903, to January 15, 1905. I was only able to find a few of them on the internet, but what I found I voraciously devoured. They are brilliant; funny with an excellent use of wordplay, and they employ one of the first documented uses of an ambigram.

An ambigram is a word or piece of art that can be read or understood from different directions. I can’t even begin to think of how to do that.

Gustave Verbeek was a talented, intelligent man. Space in a newspaper was a commodity, and thus by flipping the image upside down, he told more story for the same amount of space. Plus, who doesn’t enjoy a good bit of novelty? I can understand why he is #26 on the comics list. This style of comedy or satire writing was very prevalent at the time, and has had far reaching affects for future comic makers for generations to come.

If you have a few minutes and enjoy some good novelty check out his work. There are a few of his strips available to view for free on various sites. Many cultural institutions have taken to scanning early comics to preserve them, including Gustave Verbeek’s. Most comics were printed in the newspaper that is quickly disintegrating, so there is a huge rush to scan these images before they are lost forever.

A good source for viewing.

Purchase a Book About it Here