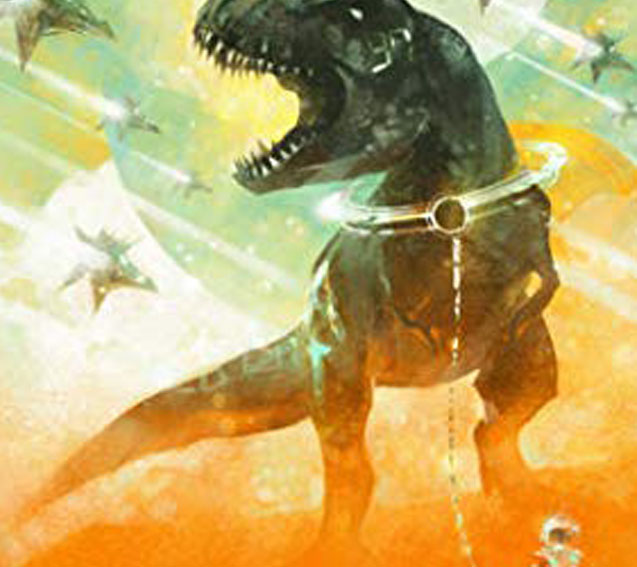 Review of “The Tale of the Three Beautiful Raptor Sisters, and the Prince Who Was Made of Meat”

“The oldest was called SKRRKITTTT, which, roughly translated into something human vocal cords can pronounce, means Allie. She was oldest by approximately six minutes and cleverest by her own assessment. Second to claw free of her shell was RRRKIISH, known henceforth as Betty.”

So here is what you do. You mashup dinosaurs and princesses and a stupid prince and what do you get? You get this hilarious Hugo nominated short story from the dinosaur issue of Uncanny Magazine.

Three sisters, SKRRKITTTT (pronounced Allie), RRRKIISH, (known as Betty), and SSSSSS (or Ceecee) love to eat livers, and tasty tasty meat. One of the sisters, ceecee, comes across the prince of the local kingdom. Think of him as prince Valium from Spaceballs. Ceecee ends back at the kingdom as a prize pet of the prince. Life is boring. The only bright spot is the visits from the princess. Mayhem ensues with a rescue from the sisters. All is not what it seems and concludes in a hilarious and correct manner.

I loved this. It is a short read, it took me about twenty minutes. Read it, it will make you laugh and it is a great way to spend some time.

You can either read the story for free Here. Or, you can buy a copy for your kindle below.

Brooke Bolander writes weird things of indeterminate genre, most of them leaning rather heavily towards fantasy or general all-around weirdness. She attended the University of Leicester studying History and Archaeology and is an alum of the 2011 Clarion Writers’ Workshop at UCSD. Her stories have been featured in Lightspeed, Tor.com, Strange Horizons, Uncanny, and various other fine purveyors of the fantastic. She has been a repeat finalist for the Nebula, Hugo, Locus, and Theodore Sturgeon awards, much to her unending bafflement.