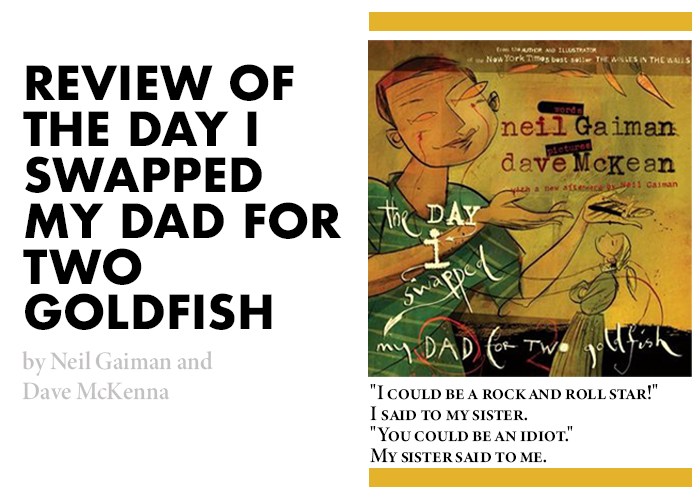 What if you wanted your best friend’s two goldfish so much that you’d swap anything for them, even your father?

What if your mother came home and found out what you’d done?

I first discovered The Day I Traded my Dad for Two Goldfish while perusing the section of Neil Gaiman Books on Scribd. (An excellent service by the way if you are a big reader) One of the goals I set for myself this year was to read Neil Gaiman’s extensive catalog of work. A rather lofty and impossible goal for myself. At this point, I will be happy tackling some of the lesser-known stories. He is so prolific and spans so many different genre’s it is a bit daunting. The audio version of this is only about an hour long. It is a short book, but at that hour, the story is engaging. Even without the visuals, it is a fun listen. Add in the visuals, and you have a different experience entirely.

The story is about a boy when after a dull morning with his dad, decides that it is in his best interest to swap up. His dad didn’t do anything; there was no row between them. You can imagine this scenario with pretty much any preteen child. His dad is dull. And he reads the same newspaper in the same chair every day. Against his sister’s good advice and wiser nature, the father is traded. The dad doesn’t notice being shuffled around from child to child; he just happily continues to read. Once the boy begins to wonder if he had done the right thing by trading away his father, he begins to see the error in his way. Thus starts his and his sister’s adventure in getting their parent back, much like the guy who started with a paperclip and traded up to a house.

The pleasant thing about this story and much of Gaiman’s work is that it is not peachy. Gaiman never speaks or writes for children like they lack intelligence, spirit, guile, or dreams. Children lack the experience that comes from age; that’s it. So he writes for them. I appreciate that as a reader, and it makes stories like this adventure so much more enjoyable. I recommend checking this story out, especially if you have access to the gorgeous visuals done by McKean. Again, it seems as if McKean adopts the same sort of philosophy that Gaiman has in regards to writing or in McKean’s case illustrating for children, they are smart visuals, nuanced, artful, and beautiful. It is an excellent addition of Gaiman’s already stunning catalog of work and worth the read.

I downloaded this from Scribd, and listened to the audiobook. I went and found the book afterwards to appreciate the wonderful images.