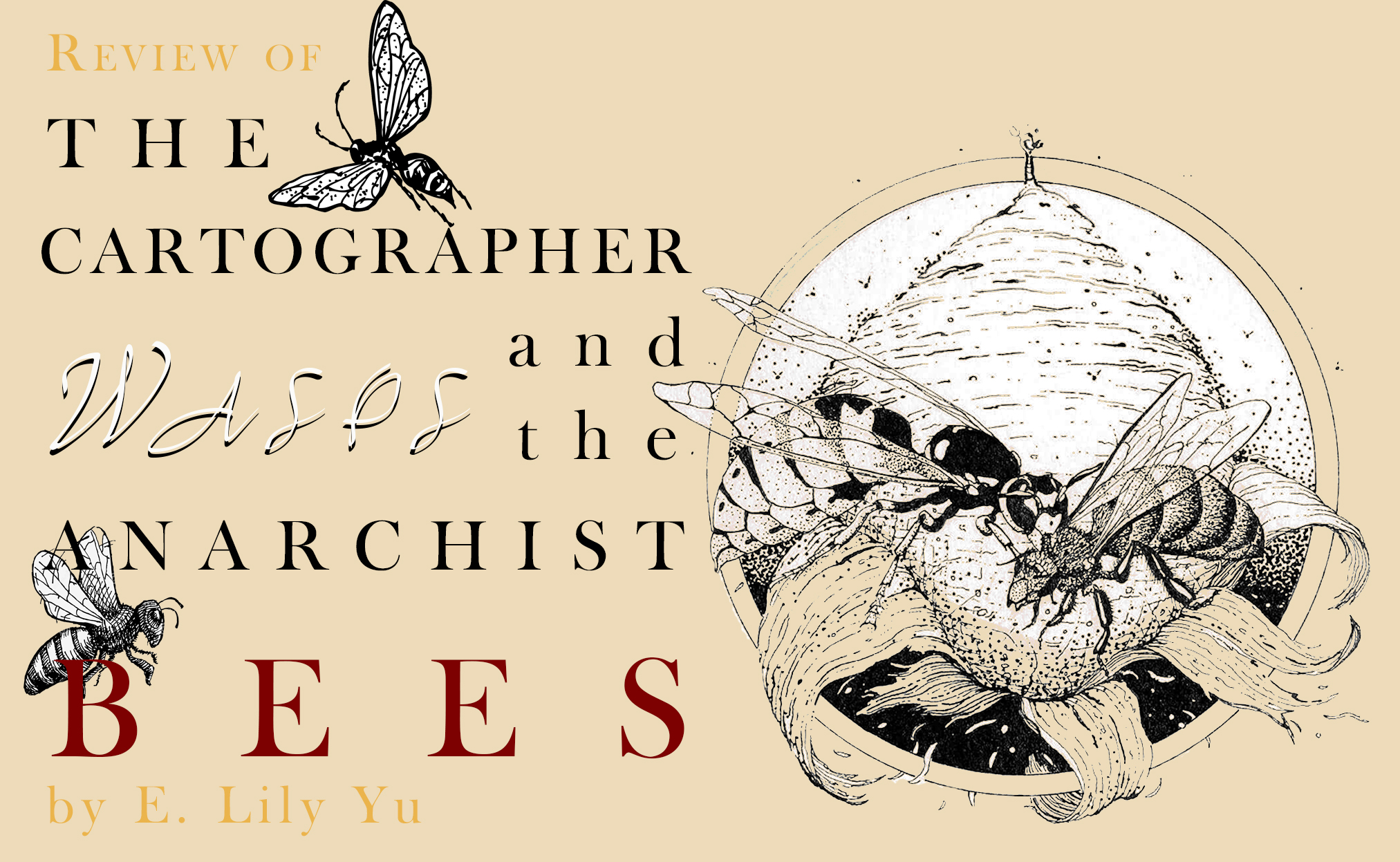 Review of The Cartographer Wasps and the Anarchist Bees by E. Lily Yu

By Beth TablerJuly 9, 2019No Comments

“To her sons in their capped silk cradles — and they were all sons — she whispered the precepts she had developed while calculating flight paths and azimuths, that there should be no queen and no state, and that, as in the wasp nest, the males should labor and profit equally with the females.”

Unnatural Creatures is a collection of short stories about the fantastical things that exist only in our minds collected and introduced by beloved New York Times bestselling author Neil Gaiman. The sixteen stories gathered by Gaiman, winner of the Hugo and Nebula Awards, range from the whimsical to the terrifying. The magical creatures range from werewolves to sunbirds to beings never before classified. E. Nesbit, Diana Wynne Jones, Gahan Wilson, and other literary luminaries contribute to the anthology. Sales of Unnatural Creatures benefit 826DC, a nonprofit organization dedicated to supporting students in their creative and expository writing, and to helping teachers inspire their students to write.

If you would like to read this story, check it out here.

The Cartographer Wasps and Anarchist Bees is a short fiction written by science fiction and fantasy writer E. Lily Y. It has been featured in many publications including Clarkesworld (Issue 55, 2011), republished by Escape Pod (Episode 343, March 2012), and finally as a contribution to Neil Gaiman’s Short Story Collection, Unnatural Creatures. Additionally, if you have a lovely hour to spend, there is an audio version of this done by Kate Baker. I came across this story while leisurely reading through Unnatural Creatures. A collection of stories that is like eating the most decadent and rich chocolate fudge. Each bite is a delicious and well balanced flavor. I have been taking bite-size pieces of it over the last few months hoping that it won’t end. Anywhere where you can get the writing of Neil Gaiman, Larry Niven, Samuel R. Delany, Peter S. Beagle, E. Lily Yu, Frank R. Stockton, Diana Wynne Jones, Saki, E. Nesbit, Maria Dahvana Headley, and Nnedi Okorafo in one place, you will have a good time. Eventually, I am going to touch on some of the other short stories in this collection. All are worth talking about, but I wanted to start with E. Lily Yu’s sculpted story about wasps and bees.

This is a story of violence in its many facets and how it repeats generationally. The most human of emotions, anthropomorphized onto a group of wasps and bees. What I find interesting before we even start on the meat of the plot is how wasps and bees are two perfect creatures to illustrate violence. Bees and wasps live in two places. Passivity and aggression. There is not much of a middle-ground. You either threaten them and they go after you or you do not, and they barely know you are alive. Their lives are the perfect dichotomy to illustrate violence. The story begins with a discovery by a human boy of a wasps nest.

“For longer than anyone could remember, the village of Yiwei had worn, in its orchards and under its eaves, clay-colored globes of paper that hissed and fizzed with wasps. The villagers maintained an uneasy peace with their neighbors for many years, exercising inimitable tact and circumspection. But it all ended the day a boy, digging in the riverbed, found a stone whose balance and weight pleased him…but a paper ball hung low and inviting nearby. He considered it for a moment, head cocked, then aimed and threw.”

Much later, after his wounds had been attended and the nest had been disposed. Even though the child had enacted the violence upon the wasps, the nest had been taken down and the wasps killed. A discovery lay within it’s papery caverns. If dipped in warm water and spread out, beautifully detailed maps of the area where drawn in vegetable dyes. The wasps where cartographers. Human’s do what we do, we come in and take the nests. This left a few survivors to flee and find a new place to build a home.

“The villagers’ subsequent incursions with bee veils and kettles of boiling water soon diminished the prosperous population to a handful. Commanded by a single stubborn foundress, the survivors folded a new nest in the shape of a paper boat, provisioned it with fallen apricots and squash blossoms, and launched themselves onto the river. Browsing cows and children fled the riverbanks as they drifted downstream, piping sea chanteys.”

Once landed they discover a hive of honey bees, two miles away that once they have settled will visit and demand tribute. The bees, is an old society filled with culture, math, traditional dances, and history. But, it lacks the violence that the wasps prove. The wasps require tributes, and slaves to be raised among the wasps and act and couriers. The story progresses, until one bee that is to be raised among the wasps has the mutation of an anarchist… The violence of resistance. This story is creatively told in the vein of Animal Farm. There are lessons to be had here, and lessons to be discussed. What is the nature of authority, or rule? The strength of an idea and how having an idea can be an act of violence. There is no ending to this story, but it is full of questions and those questions I will long be thinking about.  This was a pleasure to read and I recommend it.

“A perfect society needs no rulers,” they said. “Knowledge and authority ought to be held in common. In order to imagine a new existence, we must free ourselves from the structures of both our failed government and the unjustifiable hegemony of the wasp nests. Hear what you can hear and learn what you can learn while we remain among them. But be ready.”

This is a short story in Unnatural Creatures by Neil Gaimon and featured in Clarkesworld Magazine.

E. Lily Yu is a writer and narrative designer whose fiction has appeared in places such as McSweeney’s, Boston Review, Clarkesworld, F&SF, and The Best Science Fiction and Fantasy of the Year.

She is represented by Markus Hoffman of Regal Hoffman & Associates.