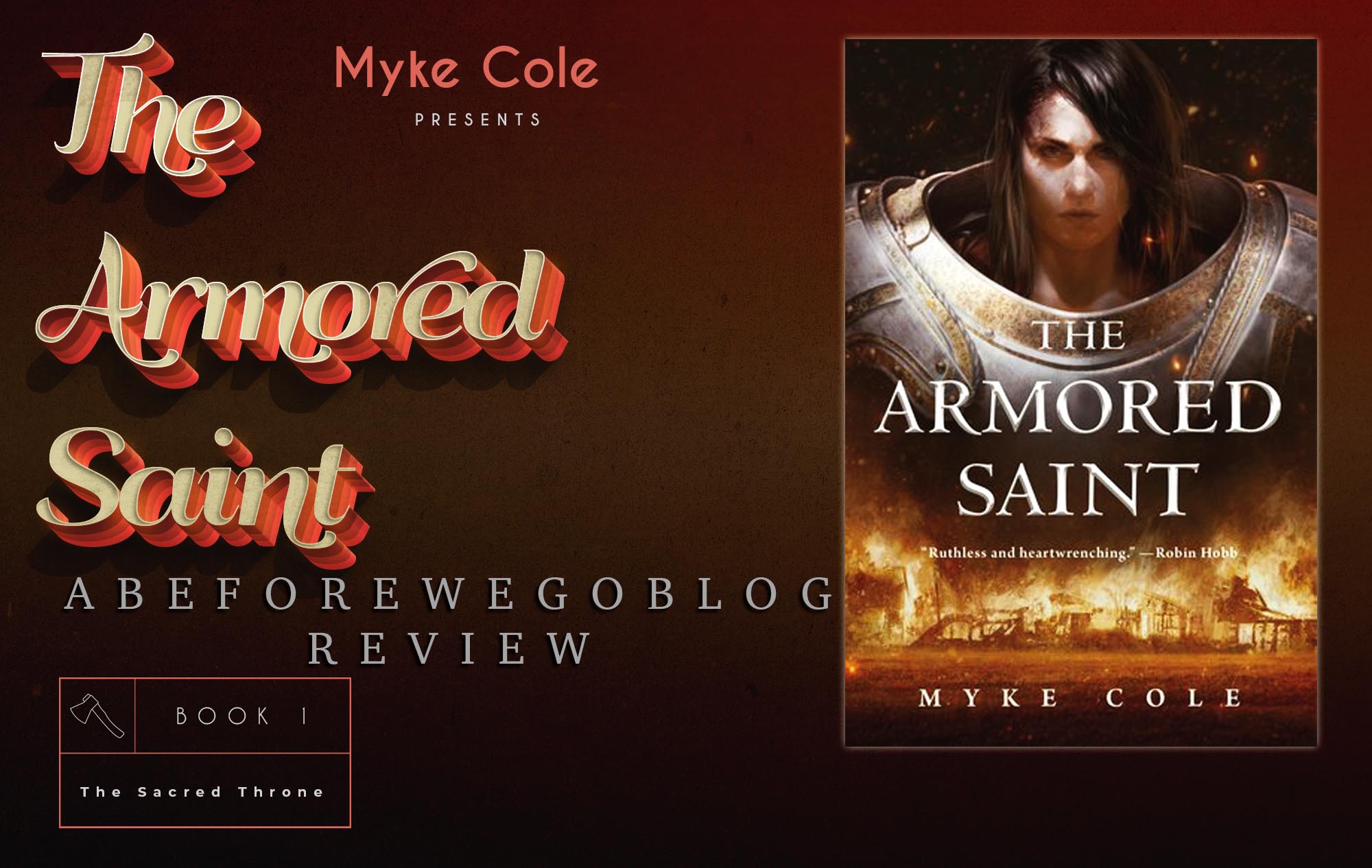 Review of The Armored Saint by Myke Cole

Heloise is the Hero We Need Right Now

“…while your thoughts are your own, the words you let pass your lips belong to the world, and the world will not always take the meaning you intended.”

In a world where any act of magic could open a portal to hell, the Order insures that no wizard will live to summon devils, and will kill as many innocent people as they must to prevent that greater horror. After witnessing a horrendous slaughter, the village girl Heloise opposes the Order, and risks bringing their wrath down on herself, her family, and her village.

The Armored Saint by Myke Cole is a quick-moving grimdark fantasy that grabs you by the throat in the first few pages and doesn’t let go.

I came to The Armored Saint by way of Myke Cole’s other series, Shadow Ops. Although Shadow Ops is an entirely different genre, I enjoyed Myke Cole’s use of language and world-building in it, and I was hoping that that would transfer to a grimdark novel. I was in for a pleasant surprise, Myke Cole kicked the writing up a notch in Armoured Saint. When reading The Armoured Saint, it feels like Myke Cole has indeed found his groove.

“Heloise Factor is my favorite kind of hero, the one who makes mistakes and suffers for them, and comes out swinging anyway. I can’t wait for you to meet her.” –Myke Cole

Starting, I knew very little about the series except for what I could glean from the gorgeous cover work done by Tommy Arnold. I had heard that Heloise was a Brienne of Tarth type character, but I knew little else. It is exciting to go into a series cold with very little information and see where the narrative takes you. It doesn’t always work out. You learn pretty quickly which books will work for you and which don’t. But I am pleased to say that the buzz about this book is well earned. The Armored Saint is a great read.

The Armored Saint is the first book in the Sacred Throne series. The conclusion to the trilogy, The Killing Light, will be coming out on November 12th of 2019. Oddly, The Armored Saint is considered a Novella but is more of a short novel coming in at 206 pages. I wouldn’t call this a hefty book by any stretch, but it is a full-bodied, fully realized story.

The story is told from the perspective of Heloise Factor. A young woman living a quiet life in a quasi-medieval town where magic and religion have mixed to form an authoritarian regime. This regime early on is described as something to be both feared and in awe of and has a deified Emporer at its head. The religious group that acts as the sword and cudgel for The Emporer frames many of its actions as “I know that this may seem cruel, but it is for your own good.” The totalitarianism is terrifying, as this religious group seems like an unstoppable force in the townsfolk’s lives.

“No,” he answered, his voice breaking, tears falling into his beard to turn the flakes of ash to gray slush. “No, child. We didn’t.”…

He took a deep break then spoke again. “And making us complicit means, we will never call them to account for the crime.”

I am glad the Cole wrote Heloise the way that he did. Instead of couching Heloise’s character in false bravado, and confidence of a character much older, he wrote Heloise to be the child that she is. At the start of the story, Heloise is pure innocence. She has not seen the ways of the world as many of the older, more grizzled characters that surround her. She is sheltered and loved like the rare flower that she is. Her responses and actions in different situations wisely reflect that. Often I would be reading this book and think, “God, why is she doing that” only to be reminded of what I was like at 16. I was young, so incredibly immature and naive, and I made stupid decisions. Cole’s writing wisely reflects that.

Along with her naivete, he wrote Heloise to have a backbone of steel. This steel is a beautiful counterpoint to her naiveite. You know, as a reader, that Heloise is going to be a force to be reckoned with when she gets a bit of experience under her belt.

“Fear is a deadly thing, Heloise. It can drain a person of all their strength, make them weak before their enemies.”

One of the best aspects of this character-driven story, along with Heloise, is the masterfully use of language to convey emotion and thought. Cole is a person who speaks plainly and succinctly. There is no flowery prose in The Armored Saint. Cole using language like a knife. He cuts through the bullshit to bring you raw emotion and stark scenes. Parts of this book are grim. Cole does not mince words. He will bash you as a reader, or cut you to the quick if he needs to. There is no mercy in the world of Heloise.

My only complaint about this masterfully crafted story is the love interest, or at least how it initially presented. It felt too immediate to me. It felt shoehorned into the flow of the story. The odd thing is, as the story progressed, the feeling of the love story as an afterthought dissipated. By the end of the book, it was the appropriate and correct direction for the story. I no longer doubted the authenticity of it, and it felt as real to me as it did to Heloise.

“It is a person you love. Not a name. Not a he or a she. A person in all their shining glory. There is a thing in us, Heloise. A seed. It makes us who we are. It is our core. That the thing that we love. It alone exists. It alone is holy. It has no home, no name. It is neither male nor female. It is greater than that.”

We need accurate representations of love.

We need more of this series and whatever else Cole can come up with.

The Armored Saint was a hell of a read. Dark and beautiful, atmospheric, and ruthless, I loved this book. And I love Heloise.

As a security contractor, government civilian and military officer, Myke Cole’s career has run the gamut from Counterterrorism to Cyber Warfare to Federal Law Enforcement. He’s done three tours in Iraq and was recalled to serve during the Deepwater Horizon oil spill. After hunting terrorists and criminals in real life, he kept up the job on TV, first tracking fugitives on CBS’ 2017 show Hunted, and UFOs on Discovery Channel’s 2019 show Contact.

All that conflict can wear a guy out. Thank goodness for fantasy novels, comic books, late night games of Dungeons and Dragons and lots of angst fueled writing.