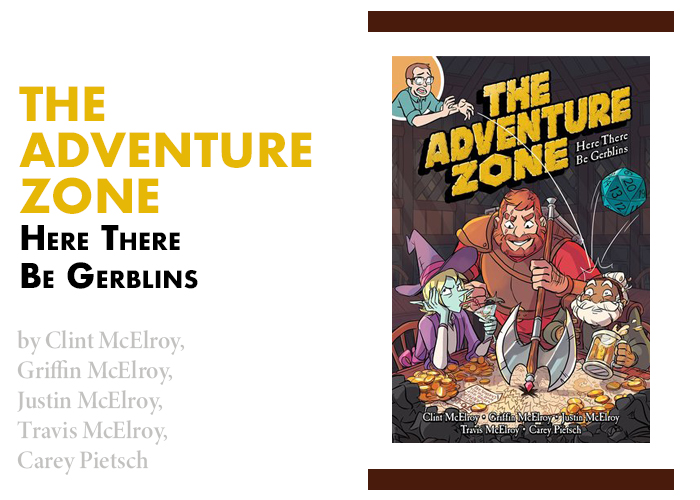 “When God closes a door, he throws a sword through your window.”
― Griffin McElroy

“Welcome to the Adventure Zone!

READ! Their journey from small-time bodyguards to world-class artifact hunters!

MARVEL! At the sheer metafictional chutzpah of a graphic novel based on a story created in a podcast where three dudes and their dad play a tabletop role playing game in real time!

Join Taako the elf wizard, Merle the dwarf cleric, and Magnus the human warrior for an adventure they are poorly equipped to handle AT BEST, guided (“guided”) by their snarky DM, in a graphic novel that, like the smash-hit podcast it’s based on, will tickle your funny bone, tug your heartstrings, and probably pants you if you give it half a chance.

With endearingly off-kilter storytelling from master goofballs Clint McElroy and the McElroy brothers, and vivid, adorable art by Carey Pietsch, The Adventure Zone: Here There be Gerblins is the comics equivalent of role-playing in your friend’s basement at 2am, eating Cheetos and laughing your ass off as she rolls critical failure after critical failure.”

I have to admit something to you. I had never heard of My Brother, My Brother and Me. Not until a friend of mine Paul at Paul’s Picks reviewed this graphic novel. It looked like an intensely fun and laugh out loud romp through geekery that I needed to embrace tout suite. Let me tell you, go out there find this book and the podcast, My Brother, My Brother, and Me. Dip your toe into it. Embrace your inner nerd and do it quickly because this is hilarious gut-busting fun. We have dick jokes, mage jokes, cleric jokes, and dwarf jokes — enough crass hilarity to cover the proverbial bases.

The story is about three adventures. Taako the elf wizard, Merle, the dwarf cleric, and Magnus, the human warrior. All bumbling morons in one way or another. They are guided by a DM full of snark and wisecracks on an adventure that you are sure they will not survive. It is nuts. It is funny. It is precisely what you expect to be said while sitting around playing dungeons and dragons with a few of your friends. Alcohol will be involved. Will they roll a 20? Will they survive an encounter with a goblin bent on their destruction?! What is with that magic spoon?

The artwork perfectly pairs with the story. It is bouncy, silly, and not too lofty which is exactly what one would expect from these three adventures. We need facial expressions that perfectly sum up Taako’s annoyance and blase attitude, not artful decadence, and we get that.

I do want to caution you, this book is not for everyone. I found it funny because I have the sense of humor of a 12-year-old boy and an appreciation for D&D. The highbrow narrative this is not. However, if you enjoy the excellent crass pun and occasional double entendre, this is for you. Order it; I will wait.

“When someone leaves your life, those exits are not made equal. Some are beautiful and poetic and satisfying. Others are abrupt and unfair. But most are just unremarkable, unintentional, clumsy.”
― Griffin McElroy

Clint McElroy is the father of Justin, Travis, and Griffin McElroy. He does the Adventure Zone podcast with them and has also appeared on several Maximum Fun donors-only bonus episodes.

Clint is the Ultimate Dad.

He does a comedy podcast called My Brother, My Brother and Me, which was adapted into a TV show for Seeso in 2017.

He also does a bunch of other podcasts with my friends and family.

He was a Senior Editorial Producer over at Polygon, which is a long-winded way of saying he made goofy videos for them full time. He also occasionally does a bit of writing.

Justin Tyler McElroy is a co-host of My Brother, My Brother and Me. He is the oldest brother of Travis McElroy and Griffin McElroy, and son of Clint McElroy. Justin McElroy was a founding Editor-At-Large (meaning editor on the loose–an editor who cannot be contained) of Polygon (the video-game/ pop-culture site of Vox media). Justin and Griffin left Polygon in 2018, but implied they’d still appear in/contribute to video content.

Travis was born in Huntington, WV and attended the University of Oklahoma where he received his BFA in acting. After graduating, he worked a bunch of retail jobs before eventually being hired as the Technical Director at the Cincinnati Shakespeare Company. At the same time as he began his career at CSC, he and his brothers Justin and Griffin began recording the comedic advice podcast My Brother, My Brother and Me. MBMBaM was well received and was soon added to the MaximumFun.org network. Travis’s theatre career and podcasting career ran concurrently for several years during which Travis also appeared on stage in several CSC shows, married his wife Teresa and started his second podcast (In Case of Emergency) and third podcast (The Adventure Zone). In 2014, after 5 years with CSC, the time had come to focus fully on his podcast career. Travis and Teresa packed up their cat, dog and all their stuff and moved to Los Angeles for two years. While there, Travis started the podcasts Bunker Buddies, Can I Pet Your Dog, Trends Like These, InterroBang with Travis and Tybee, Til Death Do Us Blart, and Shmanners (with Teresa). During this time, he (along with his brothers) began pre-production on the MBMBaM TV show and production started on The Adventure Zone graphic novel adaptation. In preparation for their impending baby, after 2 years Travis and Teresa headed back to Cincinnati with a 2 month stop in Huntington, WV to film the TV show. Travis, Teresa, baby Bebe and their animals now reside back in Cincinnati. Travis continues to produce MBMBaM, Adventure Zone, Shmanners, TLT, InterroBang and TDDUB.