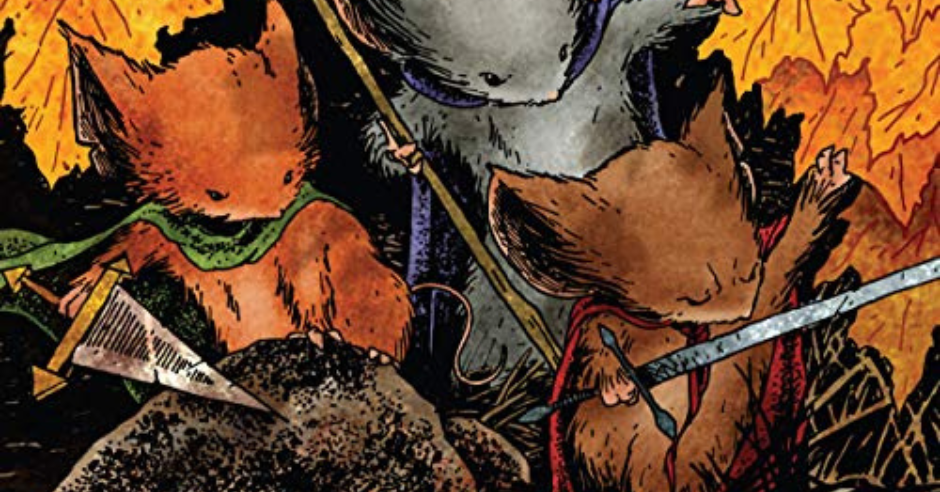 “Take no duty of the Guard lightly. Friends must not be enemies
Just as enemies must not be friends.
Discerning the two is a life’s work.”
― David Petersen

From the publisher,” The forest is a dangerous place for any animal, especially one as small as a mouse. In the past, the mouse world endured a tyrannical Weasel Warlord until a noble band of mouse soldiers fought back. Ever since the Mouse Guard has defended the paces and prosperity of its kingdom. For generations, this league of scouts, weather-watchers, trailblazers, and protectors has passed won its knowledge and skills.

Now three of the Guard’s finest have been dispatched. The mission seems simple: They are to find a missing mouse, a grain merchant who never arrived at his destination. But when they see him, they make a shocking discovery—one that involves a treacherous betrayal, a stolen secret, and a rising power that has only one goal: to bring down the Guard…”

“The best solution is always found at the point of my sword.”―Saxon’s belief

If you were walking around a bookstore and came across this book sitting on a shelf you would think that with its cartoonish depictions of animals wielding swords and bright colors that it was a children’s book. You could not be further from the truth. This is a very nuanced story about betrayal, bravery, endurance, and sincerity; it is most certainly not a children’s story.

To start off, imagine what it is like to be a mouse in the first place they are small, weak, and fearful. Mice are prey animals in nature. Their entire lives are spent in fear of the unknown next predator around the bend. Almost every creature in the forest could be a predator to them. In response, you build your home in the most protected and sheltered spot you can find and hope for the best. Now imagine you are a guard mouse. You are weak and small by nature. However, you have learned to be strong because you have to be.  You must be brave because the smaller you are, the more bravery means and there are mice to protect. Thus flows the story of mice who are bravely sent out into the forest to protect the weaker.

Stylistically, the panels are superbly drawn. The illustrations look as if they glow from within like light shining through the trees in autumn. Wind could rush through my room as a read this and I would not be more convinced that it was fall. The illustrator completely nailed what fall is supposed to feel like.