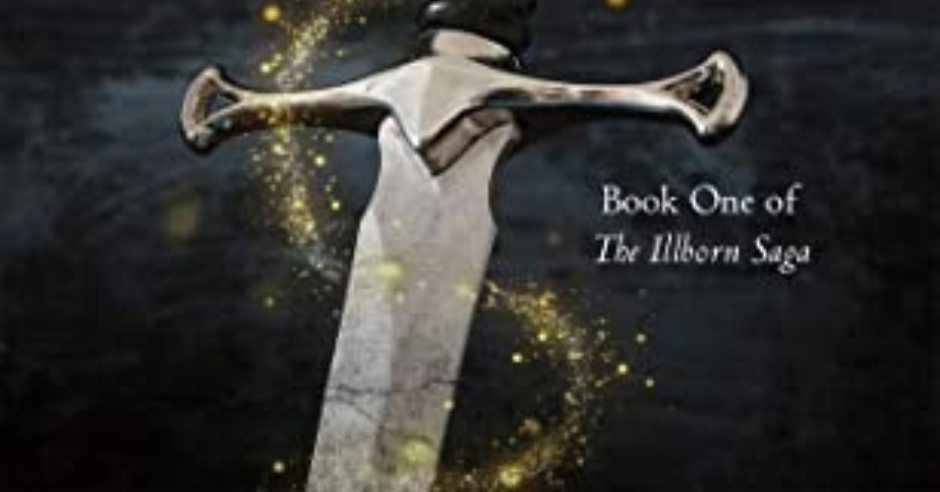 This book was an Self-Published Fantasy Blog-Off (SPFBO 7) semi-finalist last year. With the buzz surrounding this book coming into that popular contest, many readers thought the 700-plus page juggernaut had a real chance to make the finals or perhaps win the entire contest.

While this did not happen, “Illborn” remains on of the most hyped self-published fantasy books published recently. And of course, based on that, I was leery of a letdown, keeping this book high on my TBR for months, but not wading in. But recently, I felt the pressure of the sands of the hourglass running out, as new SPFBO (8) contest books would be taking precedence on my reading list.

I’m so grateful I finally took the plunge. Because “Illborn”, debut novel by author Daniel T. Jackson, and Book One in “The Illborn Saga”, a coming-of-age dark high fantasy, is spectacular.

The plot of “Illborn” revolves around the multiple POVs of four young people, two male, two female. Set a medieval-style world, with the bulk of the action taking place in the lands to the east of the Holy Land of the Christ-Like figure Lord Aiduel, the four youths, Allana, Corin, Leanna, and Arion have never met one another. Nevertheless, they are bound by a common, haunting dream that will irrevocably change their lives and set them off on a path towards an uncertain, yet seemingly unescapable destiny.

Allana lives in relative penury with her terminally ill mother, who was formerly a courtesan. Desperate, prompted by her dying parent, Allana turns to a former influential and high ranking member of the clergy for assistance.

But only sorrow awaits Allana when she takes the chance to reach out to High Priest Ronis for aid. The tragedy resulting from the fateful plea for help forces Allana to flee her homeland of Dei Magnus. But she is pursued by powerful forces seeking justice for crimes they believe Allana has committed, and they will not rest until she is captured and brought to judgement. Meanwhile, the haunting dream is also relentless, as it calls to Allana, with the words, “LUST, POWER, DOMINATION”.

A marriage match has been found for Leanna, who seems to be the perfect future husband. But Leanna experiences a sudden manifestation of Lord Aiduel, and feels compelled to pledge herself to Aiduel instead of her betrothed. Vowing to become a priestess of the faith, Leanna soon finds there is corruption, hypocrisy, and grave danger awaiting her on her journey towards trying to achieve spiritual fulfillment.

And the words “DEVOTION, SACRIFICE, SALVATION”, which drive her will be needed if Leanna is to achieve the sense of purpose and belonging that she seeks.

Arion Sepian is born a nobleman, the youngest heir of a great Duke. Sepain is skilled as a warrior, and dreams of being a great warlord, leading his father’s armies. But his father insists that Arion join the priesthood in order to increase the prestige and political sway of his noble house.

Yet fate has another plan for Arion, and he will pursue the meaning of the words that call to him: “STRENGTH, VICTORY, GLORY”.

Finally, Corin is called “The Runt.” Undersized, scorned, and ridiculed all his young life, he is given the chance for some small measure of redemption when his tribe goes on a war-raid. But Corin’s desire for self-preservation above all else leads to cowardice, and for his shameful actions he is exiled from his clan.

His faithful friend Agbeth is the only member of his group willing to join him on his travels to unexplored wilds. Corin will need to understand the words that hold his fate, “FEAR, CONTROL, ORDER”, so that he may survive what lurks, waiting to tear him apart.

All four of these characters, hearing their words whispering in their minds, begin to develop formidable powers, coinciding with the strange dream they all share. However, they must keep these burgeoning abilities to themselves, lest they be accused of witchcraft, heresy, and face the fires of the stake at the hands of those religious fanatics who exert enormous power and control in their society.

“Illborn” is precisely the type of book I adore: essentially a character-driven novel with emphasis on the evolution of the characters. The author does a superb job of moulding realistic characters that the reader can relate to, identify with, and ultimately care about deeply. Even if the reader will not always agree with the actions taken, it is highly likely that the characters motivations and choices will always be understood and seem very plausible.

Jackson brilliantly paints the picture for the reader as to how the main players discover their innate abilities, what the costs of using those abilities are to both themselves and others around them are, and just how far the characters are willing to go in order to achieve their goals. Each of the four narrative voices were very distinct, engrossing, and the reader will compulsively plough throw the book, NEEDING to know what happens to each main character.

I tremendously enjoyed all four protagonists, and I stayed up in the wee hours, irresistibly burning through pages, obsessively having to find out what happens next to each of them. I have not felt that attachment to SO MANY main characters at once since I read ASOIAF by the esteemed G.R.R.M.

This was one of the best paced books I have read for a book of this immense size. 700-plus page novels are rarely referred to as page-turners, but this one certainly qualifies. The book features one of the best prologues I have ever read in fantasy since “Hall of Bones” by Tim Hardie. The prologue is absolutely dynamite, dark, disturbing, and it only serves to whet the readers appetite for what is to come.

The constant spectre of the dream that binds the main characters together, and what it means for both them and the rest of the world, the continual individual trials and tribulations of the characters, and the gradual weaving together of the character’s physical locations as we wait to see how their paths will cross, and what the outcome will be when they do, really propel the story ruthlessly forward. This combination of these reasons to keep going through this book were heady, and I could not stop reading; you won’t be able to resist either.

Things evolve organically, and never feel too fast or too slow. The constant feeling of tension as we fret over the character’s fates, the violent confrontations, murders, and larger scale battle scenes, evil, depravity, love, lust, manipulation, and obsession, are intoxicating and make this book entirely unputdownable.

Jackson clearly states that his fictional world is based on medieval Europe and that is plain to see. “Illborn” at time feels like its historical fiction (another genre I love), and it works exceptionally well. While more generic, and with obvious inspiration from ancient Christianity, the English Reformation, the Spanish Inquisition, the Knights Templar, the Crusades, and more elements from the past, the descriptions of the settings are not heavily detailed. Somehow though, the book felt very fresh and inventive, despite the heavy reliance on borrowing from real history, and some beloved tropes.

Nonetheless, there is certainly enough elucidation to give the reader that feeling of ‘reality”, and that’s the most important thing when one considers the effectiveness of a writer’s worldbuilding.
Moreover, the world Jackson created is dark, can be brutal, and I found it very authentic.

Here we come to the thing that puts “Illborn” over the top for me and firmly into the “Book of the Year”: the dark, compelling themes and how they were handled by the perspicacious Jackson. The author tackles the weighty, sensitive, and utterly fascinating subject of religious intolerance, sectarianism, and seems to pose two interesting questions.

First question (for the reader perhaps) where is the line drawn between being a devout worshipper and being a zealot?

Second question (perhaps for the characters) where is the line drawn between being seen as a devout worshipper and being a heretic?

In “Illborn”, be utterly devoted to the point of fanaticism, and be willing to commit torture, murder, atrocities, in the name of religion, and one is a true believer. But dare have miraculous dreams or visions about Lord Aiduel, or believe one can do “miracles” in his name, and one can potentially be considered insane, and worst, an apostate and subject to sanctioned murder by the religious hierarchy.

This is a very complex and confounding contradiction humankind has grappled with about organized religion for centuries, and these are things I as a reader, writer, and person of faith have also personally struggled with. When a religious hierarchy – composed of other flawed, and sometimes even contemptible humans – decide who is a saint versus who is a sinner worthy of extermination, where is there any room for a genuine divine experience?

If one must live in constant fear of being “devout enough”, or being considered an iconoclast, does that not rob some of the joy of being a believer from those who believe? Does that not drive people away from the faith? How can one stay true to a religion whereby the people who control the religion might kill you for what you believe is the contrary: signs that you have actually being specially blessed by the deity?

Final comment, overall the book is very written. While not as ornate as I often enjoy, Jackson’s prose delighted me. It struck that perfect chord between keeping me engaged in the story and keeping things flowing, versus diverting me with how lovely the words on the page were.

Jackson spins a marvellous tale of desire, loss, forbidden powers, beatific visions, rife with political and religious intrigue, overcoming and adapting through adversity, facing ones fears, and thrilling action. Jackson skillfully weaves it all together via multiple POVs, each one, that the reader will care about. It’s a mastercraft effort, especially for a first novel. Everything about it resonated with me, and after more than 700 pages I did not want it to end. I wanted more.

Amongst a lot of phenomenal books, “Illborn” might end up being my BEST read in 2022. Highly recommended, stars off the rating scale. I will be thinking about this book forever, and can’t wait for the next installment.

Review -; The Fires of Vengeance by Evan Winter