Review – Of Honey and Wildfires by Sarah Chorn

Home » All Reviews » Review – Of Honey and Wildfires by Sarah Chorn 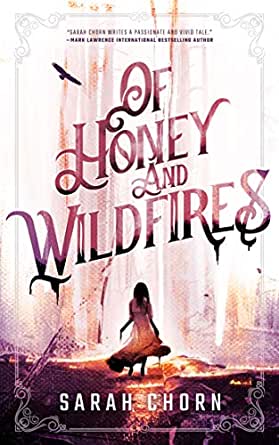 “There are good people in this world, silent and stalwart, practicing quiet acts of bravery each and every day.”

OF HONEY AND WILDFIRES by Sarah Chorn is one of my favorite books of 2020. I was already a fan of Sarah Chorn due to all of her fantastic reviews on the Bookworm Blues site but wasn’t sure how that would translate to actual novel writing. I’d enjoyed reading SERAPHINA’S LAMENT but knew some fans had mixed feelings on it.

So I was interested in what she was going to do with her second novel in the somewhat underdeveloped genre of steampunk genre. I’m pleased to say the results are more than could be expected and put it as a must read for those seeking new indie fantasy.

The setting is the aptly-named Frontier. Here, the magical substance known as Shine is pulled from the ground and is the most valuable substance in the Union. The Shine is monopolized by the Shine Corporation, though, and they use draconian measures to keep the mining population under thumb. Being from Apallachia, this put me in mind of the company towns and brutal tactics that helped inspire the West Virginia Coal Wars (1912-21).

The stars of this book are Cassandra and Arlen who are the two different perspectives of the Frontier. Cassandra is a wild girl, part native, and raised by her aunts after being dropped off by her wanted outlaw of a father as an infant. Arlen, by contrast, is the son of the Shine Corporation’s owner and raised in the lap of luxury. However, he derives no pleasure from the act of helping his father gain even more power and money.

Sarah Chorn is a master of subtle description and world-building. The Frontier is a fascinating location full of nuance and complicated issues that are, nevertheless, easy to understand due to their presentation. We understand why the people of the Frontier debase themselves for the Shine Company despite the fact that they are little more than its wage slaves. We also see how the society has developed in the wake of being a one-product economy.

I have to give credit for the author for also addressing LGBT issues in the book as well. I won’t spoil what characters fit where but I felt their storylines touched upon matters in a sweet and interesting way. Loneliness and being true to oneself are both themes within the book and watching the two characters come to terms with both provides much of the book’s heart.

I think my favorite part of the book is the fact that it doesn’t try to be more than it is. It is a small family-orientated story that deals with the oppressive local government as well as the greed that drives it. There’s no actual evil overlord, despite the antagonism of the Shine Company’s boss, and there’s no great rebellion against him either. Instead, it ends on an emotional level and I think that it is all the better for it.

In conclusion, I strongly recommend this book and think fans of steampunk and alternative fantasy will enjoy it a great deal. While I would say it feels more East Coast mountain region than Western, I feel it does really establish its own identity. It is also an indie book that really could only have been self-published due to how much it strays from traditional publishing ideas about how fantasy should be.