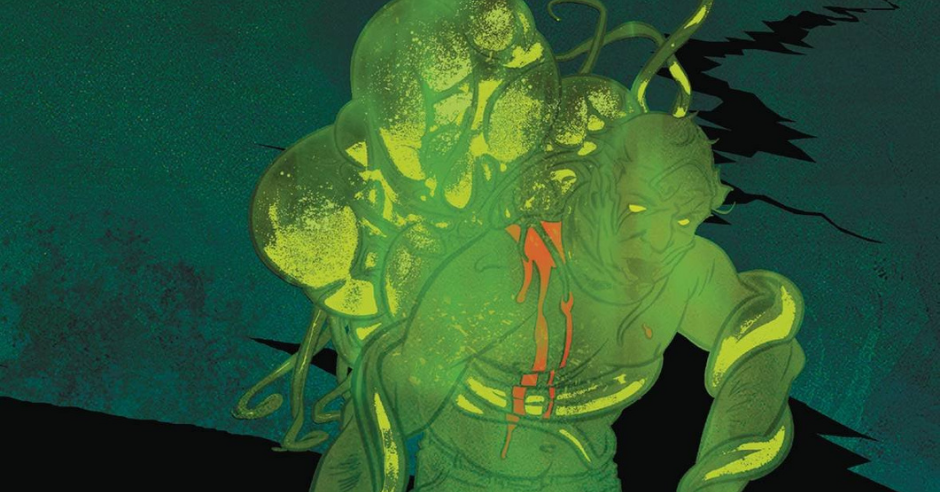 Avery Lee can tell you about what was down there, but I’ll warn you now, she don’t like talking about any of this very much ―

I want to know the TRUTH, what happened to El Sueno? ―

“The artwork from Patricio Delpeche is flawless… This is what a winner looks like in small publishing folks.” –Dusty Good, ComicCrusaders.com

Written by emerging master of horror, Tim Daniel, with stunning art by newcomer Patricio Delpeche, FISSURE is a horrifying, politically relevant look at what happens when everything we’ve built our lives on literally crumbles beneath our feet.

PUBLISHER’S SYNOPSIS: El Sueno, Texas was a single street town withering under the shadow of the Mexico–U.S. Barrier. Then the pavement split, and a massive crack spread from one end to the other, rapidly swallowing El Sueno whole. Young couple Avery Lee Olmos and Hark Wright fight to escape the mysterious sinkhole and the malevolent force that beckons from its depths.

Vault is my new favorite comics publisher. With many of their titles, they combine socially relevant ideas and science fiction/horror/fantasy that gives their stories a more profound meaning while still being entertaining and thought-provoking. The initial idea of portraying race relations as a chasm is what drove me to buy a copy of Fissure by Tim Daniel in the first place.

El Sueno was always a divided town. On one side you have the US and the other side we have Mexico. One day, a mysterious gas erupts from the ground with a rumble, and the mental divide that had always split the town is now a physical one. Many townsfolk fall into the chasm, while others are driven by some force that attracts them. At the heart of the story is Romeo and Juliet lovers, pregnant Latina Avery Lee Olmos, and Hark Wright. The conflicts, familial, and cultural that keep them apart turn into physical and horror laden. What lies in the abyss of that sinkhole will test a young couple’s ability to survive. They need to join together to survive the chasm. Something wicked lays at the bottom of that hole, something not quite human.

There are a lot of well-done aspects of this story. First and foremost is the excellent writing done by Tim Daniel (Enormous, The Plot). Daniel managed to capture the tension and nuances of a community divided by politics in a way that was not heavy-handed. It was apparent what the struggles were that El Sueno faced as a community, without coming out and slamming the readers face in it. The Romeo and Juliet type love story also fits well within the context of a divided society. Again it wasn’t heavy-handed, but sweet. Hark and Avery could have been any couple that struggled with the divide of culture and politics. Instead, because of the excellent writing, they came off as real people rather than caricatures of a Latina and a southern white man. Also, the story is told partially in Spanish. I loved that. It is a rare thing to have multiple languages in a graphic novel, and second, it is appropriate for the story and a city that straddles Mexico and the US.

The graphics are gorgeous. Each of the panels has a slight tinge of a supernatural green to them, letting the reader know that not all is right. Again, I didn’t find this to be heavy-handed. Instead, it added a sinister, almost sickly quality to the graphics that let me know that not all was right with El Sueno.

Overall, Fissure was a great addition to the Vault catalog. It had everything a horror comic needs plus a lot more to make the issues more substantial and memorable. Also, because Daniel is such a great writer, I will be checking out some of his other works.

Check out Fissure and let me know what you think.

Creator, writer, and designer, Tim Daniel, got his start in comics writing The Walking Dead: Survivor’s Guide for Robert Kirkman’s Skybound Entertainment. (He later became a zombie himself in the show’s pilot episode.) In 2012, Tim’s first original comic, Enormous, was published by Image Comics. Enormous later returned to print in 2014 as an ongoing series from 215Ink. Since then, Tim has written and co-created Burning Fields and Curse (both with BOOM!), as well as Skinned (Monkeybrain).