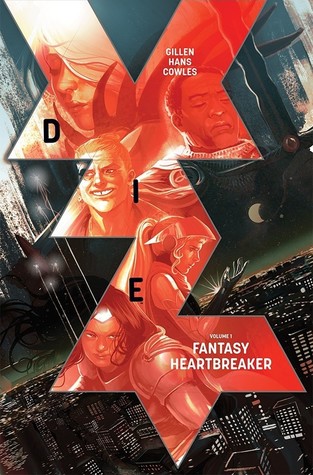 This isn’t a conversation. This is the sort of monologue you run in your head with lovers you’ll never speak to again. This is what happens when thoughts curdle.―

As he rode off, he said he would not rest until he had gazed upon my perfection once more. He dared me to use my power to make his words binding. I laughed, so I did.

The oath holds. There has been no rest.

Locke & Key tells of Keyhouse, an unlikely New England mansion, with fantastic doors that transform all who dare to walk through them. Home to a hate-filled and relentless creature that will not rest until it forces open the most terrible door of them all…

People love fantasy stories; they love the heroism of it, the sheer thrill of being the rogue stealing, the wizard whipping spells from their arsenal, the pure glory of winning. But life is not like that. Real-life is full of heartbreak, addiction, pain, love, and loss. These aspects can either break you upon the wheel or help make who you are. Anyone who is involved in fantasy or RPG has imagined themselves in a game or book at one point or another. Especially when we are young, you wish to be transported to that world to cause mischief or seek great glory for yourself. But in Die by Kieron Gillen, he took that thought a few steps further. Your thoughts and deeds within this world have real consequences.

Seven friends embark on a DND game, not just any DND game, a game where they are sucked into it and have to become the characters that they chose for fun. It is Jumanji but in dark fantasy. Very dark fantasy. These kids get sucked away in this world for two years. They disappeared, but when they returned, a geas had been put on them that they could never speak of their experiences of this world, less other people get sucked into it. Twenty-five years later, one of the remaining five that made it out of the world receives a care package containing one bloody 20 sided die. They know they need to gather together, combine forces, and enter this world again. This time though, they are broken, middle-aged people, not children. Some with families, others with serious careers but all have something to lose.

“As he rode off, he said he would not rest until he had gazed upon my perfection once more. He dared me to use my power to make his words binding. I laughed, so I did.

The oath holds. There has been no rest.

ed three years after we met. Three years after that, my eyes rotted. My oath will never be fulfilled.”Die is a dark story. It is not for the light-hearted fantasy fan, because these powers they have in the game do not come with ease. For example, one of the characters is a grief knight. The only way that he can come into power and protect the group is for him to experience a profound wave of grief. Experiencing intense emotional pain is not something sane people want to do. Enter the powers of the Diplomat. She is described as “kind of a diplomat with teeth. She’s like a cross between Cleopatra and Machiavelli.” Whenever the need arises, The Diplomat plucks terrible memories from The Grief Knight. The thief, a cyberpunk, can use her powers but only at a cost. Gold. Once the gold is used up, it disintegrates, leaving the user desperately craving for more. She has become a junky for gold. You can see how this story plays out; normal people broken by their past must make choices to save their future. Decisions that will haunt their future and again change who they are. It is an excellent story and an interesting take on DND and the realities of slaying armies, defying gods, and breaking the will of people with your powers. Also, the graphics are very well done. They embody the feel of gaming and the misty quality of a dream world that is made real.

It is worth the read, Gillan, Hans, and Cowles have written a remarkable Jumanji-esque story for fantasy fans.

“Angela is a Neo. Her artifacts are gifts from the Fair. The Fair are…”What if William Gibson designed elves” It is complicated. It’s a fairy pact. Every morning, her equipment is dead. Until she pays the tithe.”

Joe Hill’s debut, Heart-Shaped Box, won the Bram Stoker Award for Best First Novel. His second, Horns, was made into a film freakfest starring Daniel Radcliffe. His other novels include NOS4A2, and his #1 New York Times Best-Seller, The Fireman… which was also the winner of a 2016 Goodreads Choice Award for Best Horror Novel.

He writes short stories too. Some of them were gathered together in his prize-winning collection, 20th Century Ghosts.

He lives in New Hampshire with a corgi named McMurtry after a certain beloved writer of cowboy tales. His next book, Strange Weather, a collection of novellas, storms into bookstores in October of 2017.