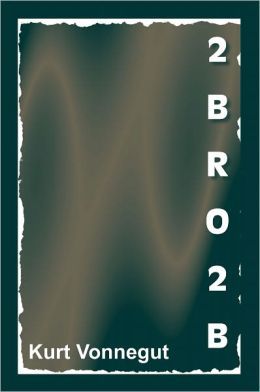 Review of 2BR02B (pronounced To Be or Naught To Be) by Kurt Vonnegut Jr.

Home » All Reviews » Review of 2BR02B (pronounced To Be or Naught To Be) by Kurt Vonnegut Jr.

Everything was perfectly swell.
There were no prisons, no slums, no insane asylums, no cripples, no poverty, no wars.
All diseases were conquered. So was old age.
Death, barring accidents, was an adventure for volunteers.
The population of the United States was stabilized at forty-million souls.
One bright morning in the Chicago Lying-in Hospital, a man named Edward K. Wehling, Jr., waited for his wife to give birth. He was the only man waiting. Not many people were born a day any more.

In the realm of dystopia, there are trends, and as Vonnegut wrote novels and short stories for a very long time, his work spans these trends. Depending on what is going on with the world, in the 1930’s – 1950’s it was government control. This is demonstrated in books like 1984, which was written in 1949 and Brave New World, which was written in 1932. In the 1960s and 1970s, it was religious control and religious Zionism. In the 1980s, it was nuclear destruction do to the influence of the cold war on culture and literature. In the 1990s, it was the rise of technology and technology run amok. In the 2000s, it was survivalism and the loss of individuality. In the 2010s till now, two concurrent trends are running in dystopia. One is the rise of the dystopian feminism movement. This is usually depicted as Christian fundamentalism and lack of reproductive control. And the other is environmentalism, influenced by the grave importance of global warming. Each of the trends blends into the other and influences one another. You can have feminism and environmentalism expressed in the same book, just as one can have religious extremism and governmental control in another.

Often, Vonnegut writes governmental authority as the antagonist in his stories. Always at odds with the stories protagonists and the protagonist’s ability to express themselves. Vonnegut had a lot to say about the state of the world, and he often got on his proverbial soapbox to express his views to beautiful results. One of my favorite examples of this is in his novel Galapagos. It is little known unless you are a Vonnegut junky like myself. A nuclear war decimates the world. The only remnants of a society that have survived, ironically enough, was a pleasure cruise to the Galapagos Islands. There the last humans must come to accept their fate and blend into nature and, by extension, evolution. It is funny and beautiful, poignant, and a bit of a thinker. I find myself enjoying 2BR02B just as much as I enjoyed Galapagos all those years ago.

2BR02B is one of Vonnegut’s many short stories. Extremely short in length, but what it lacks in length it makes up for in dialog and worldbuilding. The first sentence is,

“Everything was perfectly swell.“

This is a perfect sentence in its ability to convey dual meanings. Is everything swell? Is the speaker of the story ironic? The speaker goes on to list man’s achievements:

If Clarke’s Childhood’s End has taught us anything, it is that without a bit of conflict and struggle, life, beauty, art, and desire become meaningless. Humans need a little bit of effort to make things meaningful. If everything is given, humans can become thoughtless and lose their drive. In BR02B, even death has been conquered. Death the great equalizer, all will eventually die, has been defeated. Humans do not even need to die if they don’t want to. This creates a wholly different problem, and one that Vonnegut has written about many times, and that is population control. The residents of the united states are held to a strict population of 40 million souls. To put that into perspective, 40 million is the population of California.

At the beginning of the story, we meet a painter; he is about 200 years old but looks as if he is 35. “A sardonic old man, about two hundred years old, sat on a stepladder, painting a mural he did not like. Back in the days when people aged visibly, his age would have been guessed at thirty-five or so. Aging had touched him that much before the cure for aging was found. He is painting, which can only be described as a Thomas Kinkaid-Esque pastoral scene. “The mural he was working on depicted a very neat garden. Men and women in white, doctors and nurses, turned the soil, planted seedlings, sprayed bugs, spread fertilizer. Men and women in purple uniforms pulled up weeds, cut down plants that were old and sickly, raked leaves, carried refuse to trash-burners. Never, never, never—not even in medieval Holland nor old Japan—had a garden been more formal, been better tended. Every plant had all the loam, light, water, air and nourishment it could use.“

Vonnegut is not a wordy writer; he uses few words to convey a lot. This painter, this double centenarian, is bored.

The other character we are introduced to is Edward K. Wehling, Jr., as he waits for his young wife to deliver triplets. Triplets – unheard of! That means that for these young children to live, three people must be willing to give up their lives.

If someone wants to end their life, all they need to do is call this handy number 2 – B – R – 0 – 2 – B. Pronounced To be or naught to be after Shakespeare’s Hamlet. You can choose to live or die as you see fit. The government runs this number and is The Federal Bureau of Termination. Each new life that is born is replacing an old life like parts in a machine. Humanity, as it has destroyed all the conflicts ever presented to it has come down to number crunching — 1 for 1. Wehling, a new father to three babies, is expected to choose which children to destroy because the US only has room for one child. Dr. Hitz reprimands Wehling.

“Do the parents have three volunteers?” said Leora Duncan.

“Last I heard,” said Dr. Hitz, “they had one, and we’re trying to scrape another two up.”

“I don’t think they made it,” she said. “Nobody made three appointments with us. Nothing but singles going through today, unless somebody called in after I left. What’s the name?”

“Wehling,” said the waiting father, sitting up, red-eyed and frowzy. “Edward K. Wehling, Jr., is the name of the happy father-to-be.”

He raised his right hand, looked at a spot on the wall, gave a hoarsely wretched chuckle. “Present,” he said.

“They just phoned me that your triplets have been born,” said Dr. Hitz. “They’re all fine, and so is the mother. I’m on my way in to see them now.”

“What man in my shoes wouldn’t be happy?” said Wehling. He gestured with his hands to symbolize care-free simplicity. “All I have to do is pick out which one of the triplets is going to live, then deliver my maternal grandfather to the Happy Hooligan(2BR02B), and come back here with a receipt.”

Dr. Hitz, almost like a hitman, lacks the moral understanding that these babies are more than numbers. They are interchangeable with any other soul. Edward K. Wehling, Jr. proceeds to pull out a gun and shoot Dr. Hitz, his nurse, and finally himself. Ultimately expressing the last bit of control that Edward has in his life, and that is the right to kill himself. Ironically, Dr. Hitz and his nurse’s deaths are the pure expressions of their beliefs. One interchangeable piece for another.

Vonnegut can be brutal in his storytelling. Brutal and effective. You get the point that he was trying to get across. If you would like to read this story, it is widely available as it is now out of copyright and can be read on Project Gutenburg. I suggest giving it a try. Only Vonnegut makes the idea of population control, individualism, and creative expression engaging and thought-provoking in 30 pages.

I read this copy online. It is widely available and out of copyright. 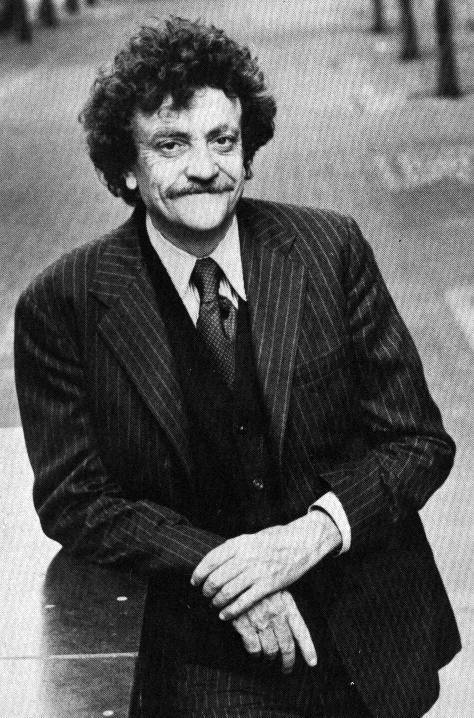 Kurt Vonnegut, Junior was an American novelist, satirist, and most recently, graphic artist. He was recognized as New York State Author for 2001-2003.

He was born in Indianapolis, later the setting for many of his novels. He attended Cornell University from 1941 to 1943, where he wrote a column for the student newspaper, the Cornell Daily Sun. Vonnegut trained as a chemist and worked as a journalist before joining the U.S. Army and serving in World War II.

After the war, he attended University of Chicago as a graduate student in anthropology and also worked as a police reporter at the City News Bureau of Chicago. He left Chicago to work in Schenectady, New York in public relations for General Electric. He attributed his unadorned writing style to his reporting work.

His experiences as an advance scout in the Battle of the Bulge, and in particular his witnessing of the bombing of Dresden, Germany whilst a prisoner of war, would inform much of his work. This event would also form the core of his most famous work, Slaughterhouse-Five, the book which would make him a millionaire. This acerbic 200-page book is what most people mean when they describe a work as “Vonnegutian” in scope.

Vonnegut was a self-proclaimed humanist and socialist (influenced by the style of Indiana’s own Eugene V. Debs) and a lifelong supporter of the American Civil Liberties Union.

The novelist is known for works blending satire, black comedy and science fiction, such as Slaughterhouse-Five (1969), Cat’s Cradle (1963), and Breakfast of Champions (1973)

Vonnegut is everywhere. He is one of the granddaddies of science fiction. He has unfortunately passed, but his work lives on.