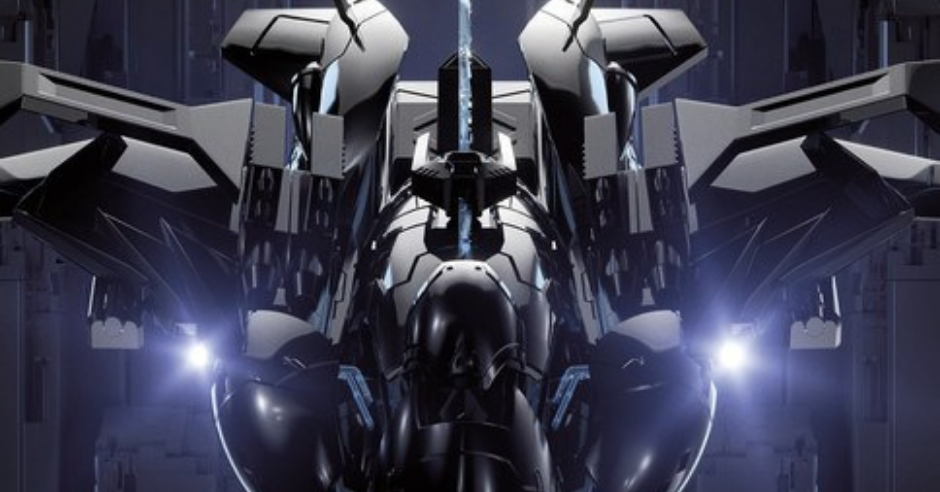 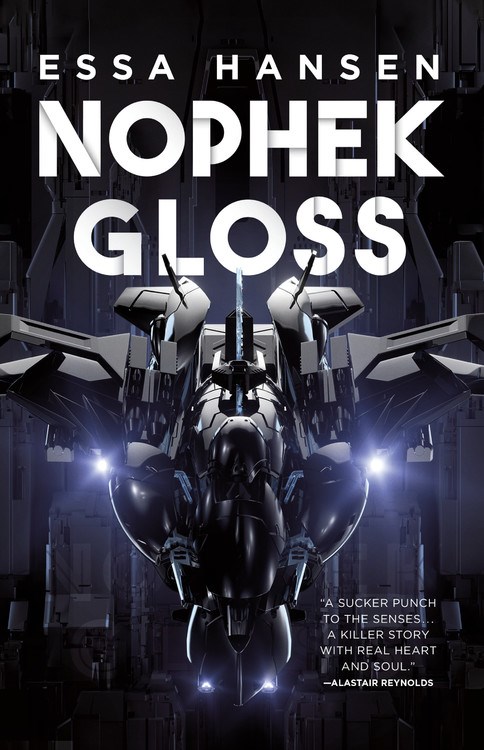 “For a long moment, Laythan’s piercing gaze assessed Caiden, judging what to say. “I know all this newness is frustrating, but we need more intelligence at a Cartographer Den before we jump to conclusions. That’s where we’re headed. You’ll understand soon.””―

When a young man’s planet is destroyed, he sets out on a single-minded quest for revenge across the galaxy in Nophek Gloss, the first book in this epic space opera trilogy by debut author Essa Hansen, for fans of Revenger and Children of Time.
Caiden’s planet is destroyed. His family gone. And, his only hope for survival is a crew of misfit aliens and a mysterious ship that seems to have a soul and a universe of its own. Together they will show him that the universe is much bigger, much more advanced, and much more mysterious than Caiden had ever imagined. But the universe hides dangers as well, and soon Caiden has his own plans.
He vows to do anything it takes to get revenge on the slavers who murdered his people and took away his home. To destroy their regime, he must infiltrate and dismantle them from the inside, or die trying.

Nophek Gloss is a story that pushes the boundlessness of the reader’s imagination. It is innovative, harsh, extraordinary, and it is science fiction at its best.

I am not sure how to classify Nophek Gloss as part of the science fiction canon. Is it hard science fiction? Quite possibly. There are elements of logic to the science used in the story. There is also a balance of drama to the narrative; the story is very character-driven, making me lean towards Space Opera. Either way, with hard science fiction or a space opera, creatures, ideas, natural laws, and creatures all usually fall within human perception. i.e., “What goes up must come down.”

This makes a lot of sense, considering that humans will read the story, and you want it relatable to commonly shared experiences. But, human perception is so limiting. If there are beings from other planets, they will not look like us or react like us. Our natural laws would probably not be the natural laws of other worlds and galaxies when given an infinite palate of choices on what characters could look like, how they would act, or how things like time, gravity, and space behave; why not be different. So when I say that Nophek Gloss is one of the most creative science fiction stories I have ever read, you get where I am going with this.

Nophek Gloss by Essa Hansen is something else.

Newcomer Essa Hansen’s story is intriguing; here is an author who is steeped in a love of science fiction and fantasy. As a day job, Essa works as a sound designer for Skywalker Sound, where she worked on Dr. Strange and Avengers: Endgame, as well as Valerian and the City of a Thousand Planets, Thor Ragnorak, Ant-Man, and Big Hero Six. She is also a falconer and horsewoman. It seems like she lives and breathes the coolest aspects of science fiction, and none of this is any surprise to me as I read Nophek Gloss. When I say that Nophek Gloss is something else, I genuinely mean it. The basis of the story is a hero’s quest type narrative. But when we readers step past the hero’s quest narrative and start paying attention to the detailing and imagination that Hansen has added into the fabric of this story, that is where Nophek Gloss soars and stands above its contemporaries. It is visually rich and compelling storytelling.

“For a long moment, Laythan’s piercing gaze assessed Caiden, judging what to say. “I know all this newness is frustrating, but we need more intelligence at a Cartographer Den before we jump to conclusions. That’s where we’re headed. You’ll understand soon.”

The story’s basis is centered around a protagonist named Caiden, who is born into indentured life. His planet and homelife are destroyed early in the novel, and to survive, he must step away from who he thought he was and enter worlds and times beyond the scope of imagination. Everything he understands and knows to be the truth is a lie. A fabrication put upon him by his previous captors. After he survives an encounter with a Nophek, an otherworldy apex predator creature, “his only hope for survival is a crew of misfit aliens and a mysterious ship that seems to have a soul and a universe of its own. Together they will show him that the universe is much bigger, much more advanced, and much more mysterious than Caiden had ever imagined.” This misfit crew becomes a found family for Caiden, helps him grow, often painfully, as he assumes a role that he is destined for in the universe.

“Pan rarely eats,” Taitn said. “Saisn have a very efficient metabolism. She drinks fluids and feeds on vibration, mostly. The dark and quiet is nourishment and medicine for her.”

If I left the story at found family and quest, it would seem like Hansen didn’t tread new material here. But Nophek Gloss is so much more. A universe, by definition, is infinite. But if a writer stops to think about what “infinite” actually means, anything is possible.

The very way we perceive experience is limiting; if we could step outside how humans view the universe and expand our understanding, what would that look like? Would it be a universe balanced on the head of a pin? Or creatures that exist as the embodiment of a memory? How about creatures that create energy sources inside their minds, to be harvested to power ships? What about vessels that create their own universes like a bubble that some species can travel through while others can’t. A story like this can be a wide-open field only limited by its creator’s experience and imagination. I think Nophek Gloss is the perfect playing field for Essa Hanson’s ideas.

Outside ideas, the structure of Nophek Gloss is easy to read. Hanson keeps the descriptions rich but concise. Hanson does not get lost in the details; she has a particular idea she wants to share with the reader. It isn’t overly flowery prose or so much detail that the reader’s mind is squashed. Instead, Hanson helps you build something concrete in your mind’s eye and gives you a chance to expound on it. This is incredibly important with a genre like science fiction, where the infinite imagination of the reader is an essential tool for building the story.

“In front of a glowing wall, a stunning figure caught Caiden’s eye. She was humanoid but ethereal and slender, with prosthetic scaffolding around tapered legs. Skin paper-thin and pearly. Her thick hair was so long it pooled onto the floor and clothed her body in dressy billows and braids.”

Another thing I tip my hat to Hansen on is her inclusivity. In a universe with infinite possibilities, there will be people/creatures that are different than you. Whether that is defined by gender, and the story touches on the question of “what is gender?” Or how people want to represent themselves or communicate. Nophek Gloss also includes neuro-diverse characters in leading roles that offer meaningful relationships to Caiden. There are no token characters in this story, and the importance of respecting diversity is evident by the conclusion of the first chapter.

Nophek Gloss also talks a lot about grief and how that is expressed. It is painful to read about Caiden and how he deals with the steps of grief. And how and if he can move on with his life. Caiden deals with grief for most of the book, and how that is defined and exercised is fascinating.

I know this seems like a dark and dense story, grief, death, and slavery, and it is. However, there is a great balance to it. Hansen interjects humor and lightness into some scenes to give the readers a break. This mostly comes in the form of Caiden interacting with his rescuing crew members. And while it doesn’t always hit the mark humor wise, it does enough to make sure that the reader isn’t dragged down into pain and torment. There are also great fight scenes that step outside the normal and exercise the imagination. What does fighting an alien creature look like?

Setting and worldbuilding are huge. When you have an unlimited palette of colors, sounds, tastes, and textures, your worlds can be anything. The ones in Nophek Gloss are brilliant colorful creations where technology and the natural world collide. Some so wild that I had to go back and reread things to understand what they could look like.

Plot-wise, Nophek Gloss is a brilliant book. Probably one of the best science fiction stories I have read this year. However, some things did get muddled, and I didn’t quite grasp Caiden’s motivations for his choices. Most of these come in the middle chapters where we don’t quite grasp who Caiden is, and his maturity level is iffy. I would think this was probably on purpose; humans go through weird growing stages where we are not thinking so clearly, just as a matter of maturing.

Nophek Gloss is a science fiction book for science fiction geeks. It is almost a love letter to those out there who find their passions in the wild and uninhibited imagination that science fiction offers. It won’t be for everyone, as some readers might not enjoy the story’s expansive nature. It is also incredibly dark. If there is a genre for grimdark science fiction, this is it. It deals with pain, joy, and grief head-on and does not mince words or details. If you enjoy your reading to be lighter fare, this probably is not the story. But for me, I loved it. Wholly and completely. Nophek Gloss is a thundering debut; it grabs the reader and tows you into unchartered territory.