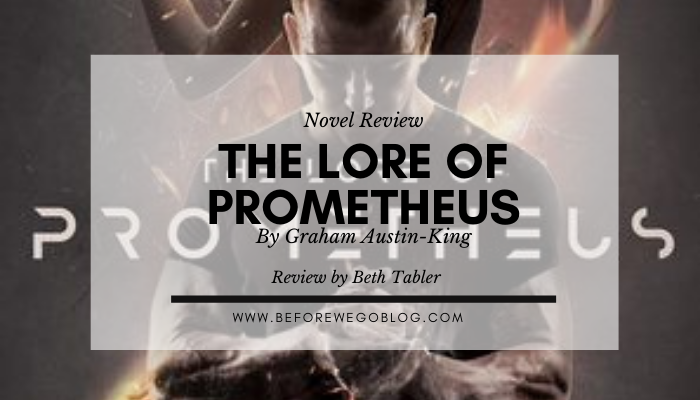 It is pure adrenaline!

“We,” Janan nodded. “The others working in what we’ve come to call the Prometheus Project.”―

Graham Austin-King, The Lore of Prometheus

The Lore of Prometheus by Graham Austin-King reminds me a lot of a James Bond novel nestled into some urban fantasy. It is pure adrenaline!

“McCourt shook his head. “I’m not, John. I saw him pull the trigger. I saw the muzzle flash. And then I saw the bullet. I saw it just hanging there in the air, halfway to you. I’ll never forget it, or the look on your face. Pearson died scared, but you, you had this look… I don’t even know how to describe it. It was like you were taking a test or something. Like you were concentrating, but furious at the same time. So angry, I’ve never seen anyone so angry. And your hand, held out, like you were warding the gunshot off…”

The story starts with Carver, an ex-military black ops soldier, gambling in a casino. There is nothing incredibly unique or different with Carver. He is a man of a particular skill set trying to make his way in the world with wicked PTSD. Carver gets into some financial trouble with the wrong kind of people and ends up needing to take a protection job in Kabul to make some quick cash. By this far into the novel, you think you know where this is going, but you don’t. Remember, there is a fantastical aspect of the story that we haven’t discovered yet.

What could be fantastical with Carver? He sees hallucinations of his dead squad members and is destroying himself with guilt. But, that seems like that is all until you read that Carver is called The Miracle of Kabul.

“I might be a whore with a gun, but I’m an honest whore. Once I’m bought, I like to stay bought.”

The story quickly shifts to that of Mackenzie. Mackenzie wakes up in a dark room, extremely thirsty, chained to a wooden board. An absolute nightmare scenario. Austin-King does a great job here differentiating the voices of Carver and Mackenzie. Where Carver is cold and professionally detached through years of training, Mackenzie does what any average person would and screams. She shouts for help till her voice cracks. Two hoses are hanging from the ceiling; one has water and the other food. Mackenzie is like a hamster locked in a cage.

As a reader, you wonder where these two stories are going to collide. Carver is on protection duty in Kabul, and Mackenzie is… somewhere.

“What I have is some kind of PTSD. Hallucinations brought on by trauma and survivor’s guilt. I’ve done enough research on my own, whilst avoiding support groups and therapy, to know that much. I know avoiding the help is a bad idea. Maybe I’m hoping it will burn itself out. Maybe I’m an idiot.”

Suffice it to say their stories do hit and become an exhilarating thrill ride. Austin-King pulls no punches; these two are fractured, broken, mended, and fractured again. The psychological manipulation of both of them is something. You know that Austin-King researched interrogation techniques because the scenes involving Mackenzie and Carver are well thought out, perfectly paced, and terrifying.

The question on my mind when I got to the end of the story was, “Are Mackenzie and Carver the good guys or the bad?” Maybe a little of both? They are believable characters as they fall in shades of gray instead of everything being black and white.

Also, a great thing about the writing of this story is the lightness some scenes have. The setting can be almost savage, but the characters both have biting humor, which I appreciate. It helped stand in contrast with the book’s serious tone and not pull the reader down into the muck and mire of it all. You watch these characters broken on the wheel of scientific breakthrough.

My only slight complaint about the story is that, for me, there was a slight disconnect between the story beats of the beginning, middle, and end. It did not flow as well as I would have liked from each dramatic section and felt a bit jarring. Mostly on the side of Carver. But the story beats themselves were all written very well.

The Lore of Prometheus is a brilliant take on government experimentation and the Men in Black boogeymen concept. The story is shocking in its ferocity because Austin-King holds no punches. It deals with PTSD in a real way, it deals with psychological damage brought on by trauma, it has realistic characters… it is pretty much everything you would want in an exciting book. And the finale will blow you out of the water. No, seriously, it was an edge of your seat exciting.

I hope there is another book.. because damn. I want to know more.

Check Out Beth's Other Reviews

I bought a copy for my private library.