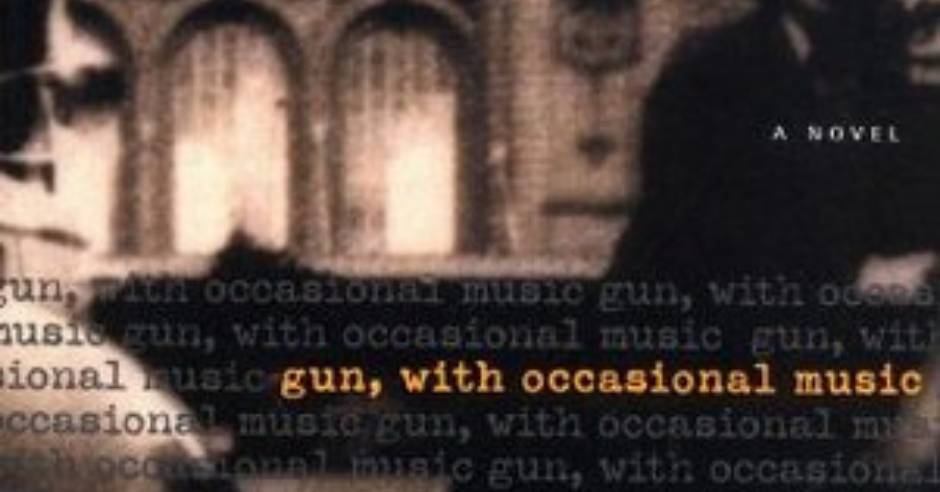 A Pastiche of Noir With A SF Twist 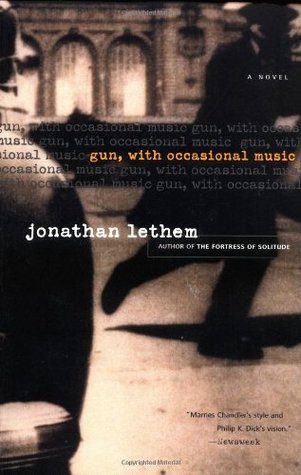 “Some people have things written all over their faces; the big guy had a couple of words misspelled in crayon on his”―

Gumshoe Conrad Metcalf has problems—there’s a rabbit in his waiting room and a trigger-happy kangaroo on his tail. Near-future Oakland is a brave new world where evolved animals are members of society, the police monitor citizens by their karma levels, and mind-numbing drugs such as Forgettol and Acceptol are all the rage.
Metcalf has been shadowing Celeste, the wife of an affluent doctor. Perhaps he’s falling a little in love with her at the same time. When the doctor turns up dead, our amiable investigator finds himself caught in a crossfire between the boys from the Inquisitor’s Office and gangsters who operate out of the back room of a bar called the Fickle Muse.

Mixing elements of sci-fi, noir, and mystery, this clever first novel from the author of Motherless Brooklyn is a wry, funny, and satiric look at all that the future may hold.

Gun, With Occasional Music by Jonathon Lethem is a fascinating book, and that’s not because of deep themes, clever deconstructions, or other meta-analyses. It’s simply a very strong pastiche of Raymond Chandler, Dashiell Hammett, and the other early noir writers with an SF twist.

It’s a book where style trumps every other aspect.

Whether you like this book is going to be directly related to whether the hammy noir internal monologues are something you like or disdain. I like them (mystery is my second-favorite genre, after SFF), and Lethem does a better job with them than most.

“The clouds were still bunched up in the sky like a gang on a street corner, and it looked to me like they had the sun pretty effectively intimidated.”

The protagonist of the novel, Conrad Metcalf, is the exemplar of this kind of hardboiled hero. He gets hired by a poor chump who’s out of karma (one of the SFnal aspects is karma, a secondary currency that you need to operate in society) and he will be cryogenically frozen because he’s taking the fall for a murder. Even as the money and incentive dries up, Metcalf pursues the case regardless, because he’s driven by a desire to find the truth and see justice done.

It’s that desire for justice that has made him a private inquisitor—he has left the Inquistors’ Office, because he’s seen them turn a blind eye too often. He sees it this time whenever a certain well-connected criminal boss’s name is mentioned.

So: a corrupt police department and a well-connected criminal. It’s a fine set-up, but it’s fairly standard in noir.

“It’s just a sophisticated version of good cop/bad cop,” he said.
“What?”
“You’re not really working for me at all. You’re just a shill for the inquisitors. You keep tabs on me and ask me questions. You play on my fears of them but there’s no real difference.” He snickered. “It’s just a game. They take my karma and you take my money and then the game is over. You like to act disenchanted and cynical, like you’re something more than a cog in the machine, but it’s just a pose.”

The plot, such as it is, is not that important. It’s an excuse to show off the world-building and the protagonist. The plot itself is well-constructed, consistent, and by the books, but I can’t imagine people reading this would be really invested in the mystery of the murder so much as the larger mystery of how did the world get this way?

But that plot gives Metcalf an excuse to investigate much of the world-building.

There are no infodumps in this book. Everything you see is described as Metcalf, who has lived here, would think of them. Most of this SFnal future is in pharmaceuticals and bioengineering. Drugs are conveniently named after what emotion you’re supposed to feel—Forgettol, Acceptol, Avoidal, and a few others.

Bio-engineering includes uplifting animals into ‘evolved’ animals who are usually some kind of servant, and raising the intelligence in children until they are functionally adults, nicknamed babyheads.

An evolved Irish setter from the deli downstairs came into the room carrying a white paper bag with a grease stain at the bottom. He looked nervously around at the inquisitors, then stepped past them to hand me the bag.

One of the cleverest parts of the book is the ending. The last fifty pages take place six years after the rest of the story. Society has shifted again, suggesting that the notion of a status quo, even a negative one, is inherently unlikely. When things get bad, they get worse.

But there’s still space for a rogue operative to mete out just a smidge of justice, such as it is anymore.

Review – You Should Play Mouse Guard by David Petersen