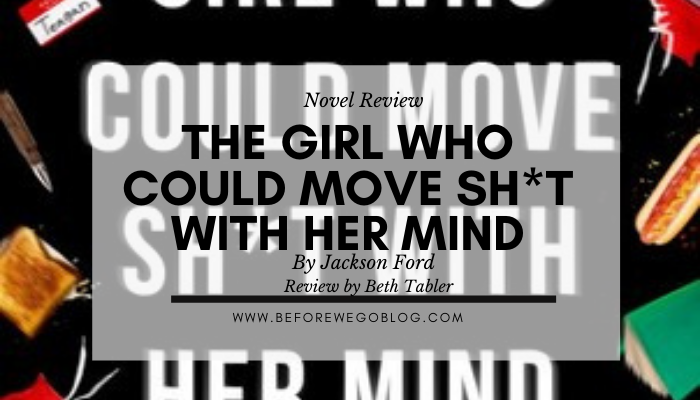 By Beth TablerNovember 3, 2020No Comments
Review

The Girl Who Could Move Sh*t With Her Mind

“Superheroes in comics and in movies pull off that secret-identity shit all the time. But this isn’t a movie, or a comic, and I am definitely not a superhero. Secret Identity? I can barely pull of the identity that I have. I won’t do that to Nic. I won’t put him in that situation.”―

Jackson Ford, The Girl Who Could Move Sh*t With Her Mind

Teagan Frost is having a hard time keeping it together. Sure, she’s got telekinetic powers—a skill that the government is all too happy to make use of, sending her on secret break-in missions that no ordinary human could carry out. But all she really wants to do is kick back, have a beer, and pretend she’s normal for once.

But then a body turns up at the site of her last job—murdered in a way that only someone like Teagan could have pulled off. She’s got 24 hours to clear her name—and it’s not just her life at stake. If she can’t unravel the conspiracy in time, her hometown of Los Angeles will be in the crosshairs of an underground battle that’s on the brink of exploding…

Full of imagination, wit and random sh*t flying through the air, this insane adventure from an irreverent new voice will blow your tiny mind.

Jackson Ford’s irreverent story The Girl Who Could Move Sh*t With Her Mind is as fun as the title suggests. Seriously, I laughed out loud a few times. My favorite protagonist type is snarky. I enjoy a good bit of snark and a well-placed quip. I also enjoy it when people lose their shit and are fed up with your antics, which is Teagan, in a nutshell. Teagan is a woman, put in ridiculous situation after ridiculous situation over 22 hours. Oh, she is also The Girl Who Can Move Sh*t With Her Mind. So the jobs she deals within this novel are… a bit out of the ordinary.
In the first chapter of the book Teagan is plummeting from the top of a skyscraper; she has ten seconds to live. Her Day gets worse from there.

Teagan is like most young women living in Los Angeles. She works a job she puts up with and has weird semi-sorta friendships with those she works. She also has an overbearing boss and big dreams.

All of these things are factually true.

Except that Teagan works for a clandestine operation founded by the government that uses her abilities, namely moving sh*t with her mind, to acquire information and stick it to the bad guys. Whomever the current bad guy is, though she never kills anyone. It is nothing like that, and she tries to do as much good as she can.

Her weird relationships are with her coworkers, who have almost as strange backstories as she does. And her boss is a terrifying governmental agent and will put her in a cage if Teagan steps out of line. A literal cage. But she does have the big dreams of owning a restaurant and eating the best food. As you can probably tell, Teagan is a cool character. Very much an average person except for that one small thing. A long time ago, Teagan got tinkered with. Something extraordinary happened; she acquired the ability to move items with her mind. Nothing huge, she isn’t moving buildings. But up to three hundred pounds and ten feet from her, Teagan can reach out and grasp inorganic objects with her mind.

How or why is not important, she just can. She is an X-Men character who drinks a lot of coffee and swears a lot.

“Superheroes in comics and in movies pull off that secret-identity shit all the time. But this isn’t a movie, or a comic, and I am definitely not a superhero. Secret Identity? I can barely pull of the identity that I have. I won’t do that to Nic. I won’t put him in that situation.”

As I mentioned, the story starts with a plummet off of a very tall building with a screaming coworker in her arms. Things have gone pear-shaped very quickly on a job, and the only thing Teagan could think to do was to throw them off the 82nd floor of a building and hope for the best. Her teammate has agoraphobia; this does not engender team unity between them. Most of her team considers her a strange liability. Especially the woman who is screaming in Teagan’s arms because she believes she is about to die.

But later, while Teagan is out getting some most excellent takeout, a dead body is found with a piece of rebar wrapped neatly around his neck. Using her powers in such a way is verboten. The murderer would have to be a person with telekinesis, and Teagan is the only person who has that? Right? Well, Teagan has 22 hours to find out who did it and prove her innocence, or it is back to government labs in Waco, Texas, for the rest of her days.

“The state hadn’t helped. The state – states plural, actually simply didn’t care. He was bounced from office to office, and the trail ran cold within weeks.”

There is a compelling sense of urgency in this novel. 22 Hours feels like we are living Teagan’s experiences in real-time. That sense of urgency drives the plot beats from one moment to the next. It also causes Teagan to make poor choices because, at this point, Teagan is a woman at the end of her rope. She is out of telekinetic juice, out of coffee, and out of time.

This story is told from the perspective of two people, mostly alternating chapter by chapter. We have Teagan, the main protagonist, and a harried good guy, and then we have Jake, the antagonist. Jake is, in most ways, a complete opposite of Teagan. They have similar backstories. Teagan was orphaned in her teens and was picked up by a government agency who then experimented on her for five years. Jake has power but never showed anyone. He was also orphaned, but at a much younger age. He bounced from home to home in the system until he aged out, stole a car, and left.

Where Teagan has kindness in her heart, Jake feels damaged. It is sad in a way. It feels like Jake could have been a good person, had the circumstances been different, but he is missing that moral core that guides good choices. We occasionally see it when he questions his own decisions, “Wait I don’t want to kill anyone…” But he pushes through that in a singular focus on his goals. In that, I liked that Jake wasn’t a cookie-cutter character. He had more dimension to him than the typical bad guy. Their two stories swirl around each other for most of the book—their actions directly affecting each other, but never quite meeting until the story unfolds.

Some of the best parts of this novel are the interactions that Teagan has with her coworkers. As much as the 22-hour time limit affects Teagan’s future, it also very much affects the team as a whole. Her choices, and the information that she can find directly influences the rest of the coworkers’ lives. This incentivizes them to help her as much as possible, even if she annoys the hell out of them. It isn’t just Teagan who has a wild ride over the next 22-hours, it is Paul, Carlos, Annie, and Reggie who are going along with her.

“…They tased me. After that they got smarter. Kept me dosed.”

The Girl Who Could Move Sh*t With Her Mind is fun and silly. Teagan makes stupid choices and shows her naivete, but damn, is this an engaging story. Teagan’s revelations over the 22 hours allowed her character to expand and be a bit more than just action. This growth is an essential and wise choice on the part of Jackson Ford. It made this story more than action and wise-cracking. It gave it some heart, some sorrow, and a little pluck.

This is the perfect kind of book to kick back with after a long day and enjoy it. I highly recommend this because we readers want some psychokinesis fun and to cheer a character on. Teagan kicked a lot of ass, even when she was getting her ass kicked, and I am looking forward to the next book.

Check Out Some of Beth's Other Reviews

I read this as a reviewer for Grimdark Magazine