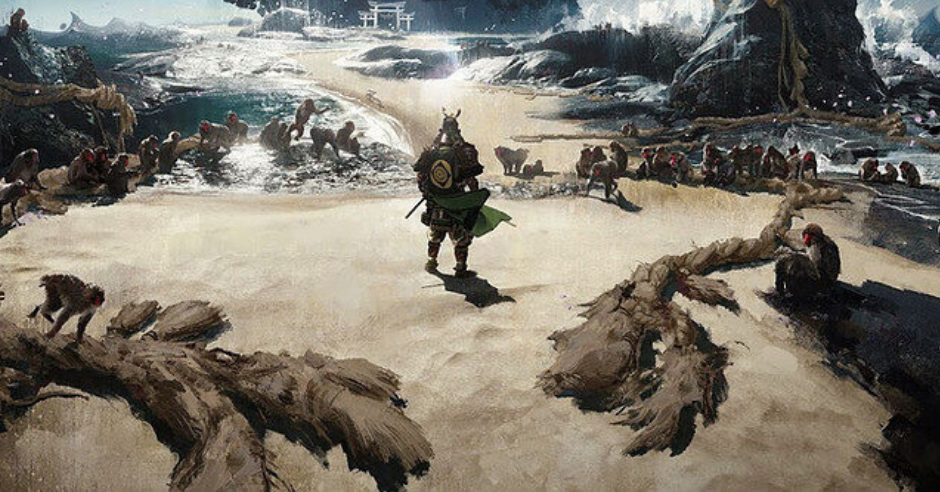 This game is a mixture of ahistorical “cool” and surprisingly accurate details.

GHOST OF TSUSHIMA is a samurai open world game by the delightful people at Sucker Punch media who should be making a fourth InFamous game but decided to make this instead. Because the game is 90% fantastic, I’m going to forgive them for this. However, they really need to get on that since InFamous was a major influence on the Supervillainy Saga and part of the reason Gary is a guy in a hoodie who has an eternal battle with his alternate older cynical self. I mean, uh, I took nothing from those games.

The premise is that you are Jin Sakai, a samurai who is nephew of the tiny island’s Jito (AKA Lord). The Mongols are invading the island during the first invasion of 1274 AD and that’s never a good thing. Historically, the islanders held off the Mongols for a day with their knowledge of the terrain and incredible archery skills, but Lord Shimura is an idiot compared to the real-life So Sukekuni and charges into battle straight away. Mind you, historically So Sukekuni had eighty men and the Mongols had eight thousand so neither of them were ever going to win.

Unlike history, there’s a couple of survivors of the battle and one of them is Jin Sakai. Jin Sakai is nursed back to health by a beautiful thief named Yuna. Yuna thinks Jin can help her and her brother Taka get off the now-conquered island but her use of stealth as well as “dishonorable” tactics is a way to possibly fight against the Mongols. What follows is Jin eventually developing into a proto-shinobi (actual ninja not existing until the 15th century) who begins a reign of terror against the 8000 or so Mongols present.

This game is a mixture of ahistorical “cool” and surprisingly accurate details. Speaking as a guy with his degree in Asian history, I could tell you that katanas weren’t invented yet (and were in fact created as a way to fight Mongols), that “honor” certainly didn’t exist like it was described in this game, that the Mongols swiftly moved from Tsushima to Iki Island then the mainland, and Kublai Khan led the Mongol invasion of Japan rather than the fictional Kotun Khan. I’m not going to because I am not a relentless killjoy.

Indeed, Ghost of Tsushima is a game that is dripping with accurate historical details and fascinating insights into the culture of both Medieval Japan as well as the Mongol Empire. After the treatment of the Dothraki in Game of Thrones, it’s nice to have a game that remembers they were the most technologically advanced society in the world for centuries as well as an incredibly efficient empire that seemed unstoppable.

Khotun Khan may not be the most nuanced character but he’s an effective villain as well as an intelligent one. He’s not needlessly sadistic, he’s very needfully sadistic. What horrors he inflicts are only on those who resist and if you surrender without a fight, you are spared–something pride doesn’t let the majority of people agree to. I also very much enjoyed Jin’s conflict with his friend, Ryuzo, who points out that even if they manage to raise an army–it will be used as cannon fodder by his uncle’s questionable leadership.

But how does the game play? Basically, it’s Assassins Creed: Samurai Edition with all the good and bad that implies. It’s also more like the “classic” Assassins Creed games versus the new Witcher 3-like ones. You can do a lot of sword-fighting, yes, but the game gradually makes it harder and harder to do so until you are encouraged to make use of your ninja arsenal of throwing knives, fireworks, smoke bombs, and stealth skills. There’s also a dueling system that is immensely fun, but you can get annoyed when you suddenly lack access to all your toys. I would have loved duels where I could throw smoke bombs or knives.

Unfortunately, the game starts to get a bit tedious if you’re a completitionist around the second Island I actually put it down for a few months until I was ready to resume the grind of Mongol slaughter, fox chasing, and running around the map for collectibles. This is probably a game you might want to just do the story missions for and hope you’re properly kitted out for the final confrontations. Still, it is absolutely beautiful on every conceivable level, and I would often stop to stare at the fantastic art on display.

Deserving of its own spot in this review is the Iki Island expansion that comes with the Director’s Cut of the game. It adds a second island (and fourth zone) to the game in the titular island. Iki was the location of the second part of the Mongol Invasion and is a good location to continue the story from despite the fact it bears little resemblance to the real-life location. Basically, Iki Island is Mos Eisley or the Japanese Tortuga (The Pirates of the Caribbean one). It is an island almost universally inhabited by pirates, raiders, and smugglers.

While technically playable after you reach the second zone of Tsushima, the truth is this is much better played as endgame content when you have finished off Khotun Khan and his forces. The enemy types are much more varied and there’s a significant difficulty spike. Technically, it’s just more Ghost of Tsushima but there’s a few notable additions like the addition of saddlebags and horse charging mechanics.

Iki Island has been invaded by the Mongols but this group of them is hyper-religious and into cult brainwashing as well as using drugs to drive individuals mad instead of straight up murder. It’s basically the Seed family from Far Cry 5. Their leader, the Eagle, is a shamaness who preys upon Jin’s daddy issues and PTSD from witnessing his father murdered in front of him. Jin finds himself poisoned early on and has to deal with the resulting hallucinations that, again, feel a bit more Far Cry than Ghost of Tsushima.

Much of the island’s story content deals with the invasion of Iki Island by Jin’s father twenty-years earlier that has some odd comparisons to the War on Terror. After dealing with numerous pirate raids, the samurai come to Iki island to establish order and root out the undesirable element. However, the locals get caught up in the attack and radicalized due to the samurai’s heavy-handed tactics. Personally, I think it’s a poor comparison and I kind of wish Jin could wipe out the pirates rather than focus on teaming up with them against the Mongols. Still, great storytelling and I think the emotional beats are stronger than in the main game.

Iki Island is exceptionally well-designed and every bit as beautiful as the main game with its own unique personality. The locals are kind of a bunch of scumbags, even the non-pirate ones, but that just underscores the DLC’s themes. Jin wants to defeat the Mongols and is willing to ally with everyone here but has a limit to how much he’s willing to let the locals shittalk his dad. I especially liked the character of Tenzo who thinks Jin is fooling himself with all his honor and nobility crap.

If I had a single complaint, it would be that the villain, the Eagle, is even weaker than Khotun Khan. She’s basically an evil witch and one-dimensional in her attempts to recruit Jin Sakai to her cause despite the fact hes’ carving up her tribe one Mongol at a time. We don’t even know what her goals are since she doesn’t seem to answer to Kublai Khan. Still, this is a small complaint for an overall excellent emotional ending to Jin’s journey.