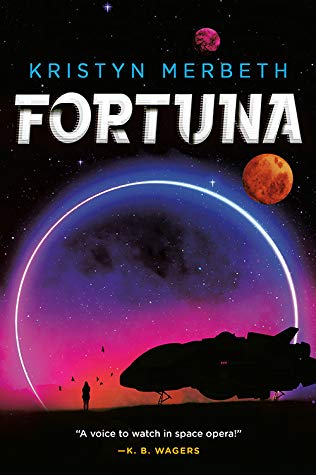 The Fratelli’s in Space

“The moment we hit atmosphere, my nerves dissipate into a rush of adrenaline that makes me feel like I’m floating. I’m barely aware of my hands moving over

the control board or my eyes roving the screens; instead the incoming information merges with my own thoughts, which flow seamlessly into responses from the ship, as if Fortuna is an extension of my body, another limb.”

Fortuna launches a new space opera trilogy that will hook you from the first crash landing.Scorpia Kaiser has always stood in Corvus’s shadow until the day her older brother abandons their family to participate in a profitless war. However, becoming the heir to her mother’s smuggling operation is not an easy transition for the always rebellious, usually reckless, and occasionally drunk pilot of the Fortuna, an aging cargo ship and the only home Scorpia has ever known.

But when a deal turns deadly and Corvus returns from the war, Scorpia’s plans to take over the family business are interrupted, and the Kaiser siblings are forced to make a choice: take responsibility for their family’s involvement in a devastating massacre or lay low and hope it blows over.Too bad Scorpia was never any good at staying out of a fight.Perfect for fans of Becky Chambers and Catherynne M. Valente, Fortuna introduces a dazzling new voice in science fiction.

Fortuna is this story told by author Kristyn Merbeth previously writing as author K.S Merbeth in the Wastelanders duology.

Imagine Momma Fratelli from Goonies is your mother and ship captain. Except your ship is in space, and you are part of a family of smugglers. Your family is spectacularly chaotic, and you are trying to save millions of people.

I have had my eye on this book for months. The synopsis, space opera, and family dynamics, as well as that gorgeous cover, had me sold long before copies were available to read. The cover, bright and glaring, reminds me of sunset on a desert planet with some serious Firefly vibes thrown in. Maybe Dune in space? I wasn’t sure quite what to expect.

“We are among the last of a dying breed surviving only because my sibling’s unique birthplaces allow us to bend the law.”

Scropia Kaiser is the second oldest of a family of 5 children and one spectacularly distant messed up mother. All Scorpia wants is to satisfy and make her mother proud and step into the boots of her older brother Corvus. Corvus had left home previously three years ago to join the Gaian military service and fight in an unwinnable war. His choice to enlist and abandon the Kaiser family is devastating to the Kaiser children and Scorpia in particular.

Corvus is finishing up his tour of service and wanting nothing more to come home to the life he has left. He is done with war and haunted by the deeds he had to do to battle in that war. It has left deep marks on his soul and a bought of PTSD that he does not know how to deal with.

Both characters have enormous hurdles to overcome. Scorpia cannot stop stepping on her own feet. She is continually screwing things up or drinking too heavily. Twice in the novel, she almost got her entire family killed due to the ramifications of her choices. There is winging it, and then there is suicidally and stupidly not thinking before your actions. Her actions were not redeemed to me because there were no offset qualities that help balance the scales.

She was just a mouthy fuck up most of the story with a considerable ego and mommy issues. She would have been redeemed by the love she had for her brothers and sisters, but they were flat characters, and thus that love felt very flat and unreal.

This story is the pairing of two narratives, one told from Corvus’s side while the other told from Scorpia’s side. The unfortunate thing about this story is although the setting and the bare bones of the worldbuilding are there and exciting, I did not care about either character. Scorpia especially. Her decision-making, alcoholism, naivete, and arrogance that is almost stupidity turned me off from her as a protagonist.

Scorpia is a flawed character, as all people are imperfect, but there needs to be a point to her choices and chaos, including her addiction to alcohol. It is difficult to explain, but it almost seemed like her addiction lacked authenticity.

It did not ring true. She was an alcoholic, not someone addicted to sweets. Alcoholism is a real thing and can be devastating, it isn’t something for pratfalls or rim shots. Corvus was a much cooler character. In the beginning, his brooding and aloofness were annoying, but as the story continued, the brooding led to some character growth and change. He fleshed out into a three-dimensional character.

With the difficult time I had connecting with the characters, the slow down of the plot and pacing destroyed my enjoyment of the book. It became a slog, which was unfortunate because it had such tremendous promise. I love the idea of a dysfunctional band of smugglers who happen to be family run by a matriarch – Very Firefly.

But something did not cinch together, and the depth and love of the characters I would need to become emotionally invested in the story never became deeper than a superficial level. For example, Scropia’s brother and sisters were nothing more than cardboard cutouts for most of the story. I know the familial connection was supposed to be there and implied by the author, but it never connected.

As far as the enjoyment level of this story, at about the 60% mark, I almost DNF’ed, which would have been a shame because the author brought everything together nicely in the last 30% of the book. The last 30% ended up being fun and not quite what I had imagined. I liked the spin she put on it and opening it up for the next book in the series, which is why I gave this a lukewarm 3.5 stars. I won’t be continuing this story as I don’t think I am the right audience, however much like other recent books I have read this book will find the right audience. I could imagine a considerable bunch of love for it, which is excellent. Every story will find its readers.

(EDIT –  I continued on this story and I am so glad I did. The next book is fabulous.)

Either way, come because of the gorgeous cover, and the synopsis is neat and stay for that last 30%.

Check Out Some of our other reviews

Review – Kings of the Wyld by Nicholas Eames