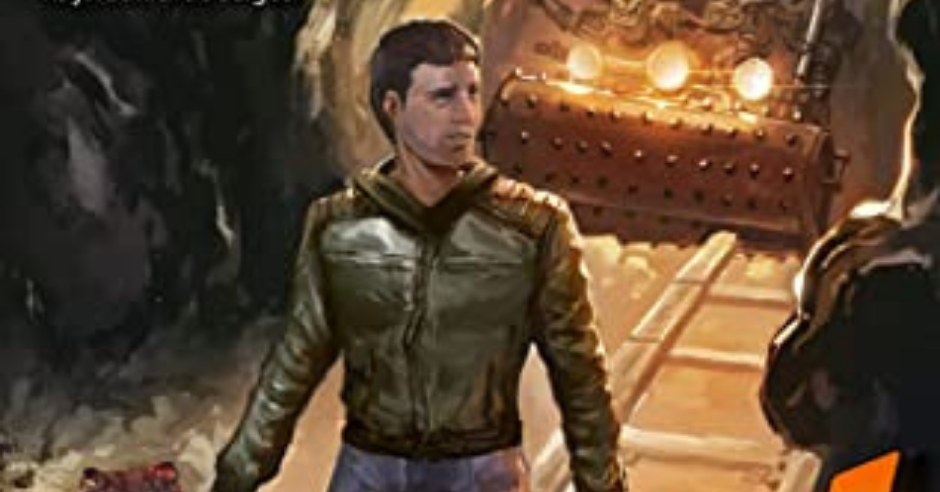 The apocalypse will be televised! 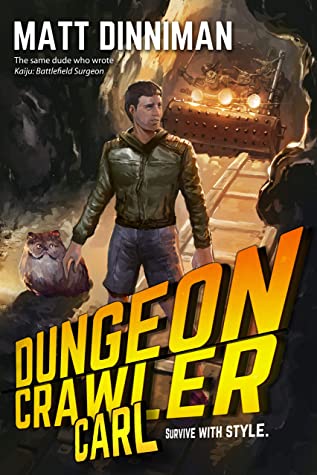 A man. His ex-girlfriend’s cat. A sadistic game show unlike anything in the universe: a dungeon crawl where survival depends on killing your prey in the most entertaining way possible.
In a flash, every human-erected construction on Earth—from Buckingham Palace to the tiniest of sheds—collapses in a heap, sinking into the ground.

The buildings and all the people inside have all been atomized and transformed into the dungeon: an 18-level labyrinth filled with traps, monsters, and loot. A dungeon so enormous, it circles the entire globe.
Only a few dare venture inside. But once you’re in, you can’t get out. And what’s worse, each level has a time limit. You have but days to find a staircase to the next level down, or it’s game over. In this game, it’s not about your strength or your dexterity. It’s about your followers, your views. Your clout. It’s about building an audience and killing those goblins with style.

You gotta fight with vigor, with excitement. You gotta make them stand up and cheer. And if you do have that “it” factor, you may just find yourself with a following. That’s the only way to truly survive in this game—with the help of the loot boxes dropped upon you by the generous benefactors watching from across the galaxy.
They call it Dungeon Crawler World. But for Carl, it’s anything but a game.

LitRPG/GameLit is a hit-or-miss genre to me, often concentrating on gimmicks with stats or using harem elements to draw in fans instead of concentrating on creating a good story with strong world-building. With that said, the hits in the genre can stand up with the best of more traditional fantasy and sci-fi. Dungeon Crawler Carl definitely fits into the hit category for me. In fact, I rate it as highly as my favorites in the genre, 8-Bit Bastards by Joshua Mason and Mogworld by Yahtzee Crowshaw.

The world-building is just fantastic in this story. The idea that aliens would destroy all above-ground structures, and then re-purpose them into an underground dungeon like a Role Playing Game is just crazy, but it works. Then inhabiting that dungeon with a mix of aliens and more traditional fantasy creatures, and some hilarious plays on modern culture (the KraKaren, for example) just shows the author’s creativity and warped sense of humor. The world is just basically an intergalactic reality tv show, but with real-life consequences.

And this is where the fantastic cast of characters comes in. Carl, the erstwhile title character, is just kind of an everyman, a Coast Guard vet who was just kind of meandering through life when the aliens came a knocking. Babysitting his soon-to-be ex-girlfriend Bea’s cat, Princess Donut, a prize-winning show cat, he lucks out as she escaped out the window and he had to chase her outside when the buildings all collapsed. It only gets crazier from there, as he and all the survivors are told they have a specified time to find a stairway leading to the dungeon to try and save their planet, or be stuck on a barren waste of an earth. Carl, unfortunately, chased the cat out in his boxers, a leather jacket, and Bea’s crocs. So armored, he starts his adventures in the dungeon, as he must try and keep himself and Donut alive in the dungeon, while most of the things in the dungeon are trying to kill the “players”. Can you say Goblin Killdozer? Because Carl and Donut meet one soon enough, in a hilariously dangerous first contact. It only gets crazier from there as Donut is given intelligence through a prize in a lootbox, and becomes a player in her own right. She’s still a cat, though, so this leads to some hilarious situations as well, as they proceed through the dungeon to reach the second floor of eighteen. The rest of the characters are a lot of fun, ranging from an alien mentor in the tutorial guild that tries to help them while not getting in trouble, to a group of players escorting a bunch of people from a retirement home through the dungeon. This is hilarious and sad in turns, and is definitely not something I expected to see.

The villains are the usual mix of bosses you’d expect in a dungeon, but with funny twists on them. They are also, in some cases, transformed humans who are playing a part against their will, making the fight against them that much more difficult. There are some choices Carl and Donut have to make that are heart wrenching, to say the least. It was not something I expected, but it added a whole new layer to both the character choices and the story. Some of the villains were just hilarious plays on pop culture, such as multi-level marketing fairies. The aliens that run the game are also an interesting bunch, giving a whole new meaning to cut throat businesspeople. Oh, and before I forget. The AI voice announcer is a total jerk, in possibly the most hilarious voiceover ever.

The narration is performed by one of my favorite narrators, Jeff Hays. I have been a fan of his for years, because his production company, Soundbooth Theater, is one of the best in the audiobook market. He does such a fantastic job of bringing this story to life. Whether it be the voices of the various characters or the AI voiceover, which is hilarious, he gives each character a unique and very distinct voice all their own. You are never in doubt about who is speaking. Its hilarious when he has to read out Donut’s text messages on the chat, since she texts in all caps and he actually emphasizes that. It’s the little touches that really stand out, and his narrative pace is so perfect, he can give classes on how to do it right. If you have the chance, I recommend the audio version.

I was so sad to see this bookend. I was so enthralled in it, I was shocked when it ended, but I knew there were more books in the series on audio already, so I have that to look forward to. If you are a fan of LitRPG/GameLit, or just funny fantasy dungeon crawler stories, I think you can find something to enjoy here. I highly recommend this book, and the audio version especially. You won’t be disappointed.