Which would you choose if given the chance? Peace…or freedom? 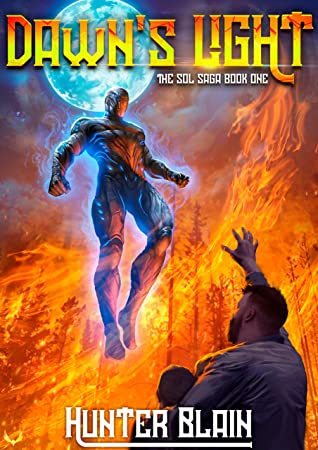 DAWN’S LIGHT by Hunter Blain is the first book in what I hope will be a long-running superhero series. The Sol Saga is a change from the author, who is primarily known for his Preternatural Chronicles books. Being as I am both a urban fantasy as well as superhero author, I was interesting in reading what another author making the leap between genres would be able to do with the change in expectations. Much to my surprise, the result can basically be summarized as, “What if Watchmen was really-really funny?”

The zig-zags of tone will not be for everyone but I have to say I found to be immensely entertaining. Specifically, this can be some of the darkest superhero literature I’ve read with the protagonist, Sol, giving a family terminal radiation sickness while trying to save them from burning to death in a fire. Later, his attempts to take refuge with a family result in the horrific death of everyone involved, including a scene where someone begs him to save their dying mother only for him to be able to do anything about it.

Then there’s Harry, who is quite possibly the worst soldier of all time and who every single action probably contributes to the “Things Private Skippy is no longer allowed to do” list. In a book where large sections of America are devastated and many innocents are slaughtered in the “a teddy bear is floating in the pool ALA Breadking Bad” way, he’s the kind of guy who stops to make a loud Ghostbusters joke. I personally love this as it’s utterly insane and contributes to the book’s uniquess.

The premise is Sol is a strange visitor from another dimension inhabited by humans. Exiled by his people for the crime of accidentally killing someone, he has gained immense powers via the transfer to this reality but has a spotty memory. Tenebris has a bunch of solar based powers and is someone who terrifies the government but he is willing to do his part to try to make the world a better place. In fact, it’s his job to save us from ourselves.

In what I think is one of the humor bits that doesn’t contrast with the darker themes, I really enjoyed the fact that Sol is completely oblivious to how horrifying and dystopian his society is. Its a totalitarian eugenics society that is implied to have destroyed all rival culture and outlawed religion but Sol gets all butt hurt when anyone reacts to his descriptions with anything other than complete happiness.

There’s a strong but subtle social satire element to the book as well with the premise being, essentially fascism vs, anarchy (ala the original V for Vendetta). Sol comes from a society of absolute authority and control but he’s up against a man who argues, not unconvincingly, that the current governments of the world are less of an actual social contract and more of a pyramid scheme. I also appreciated his plan to blow up all social media in the world, which seems like it would be counter-intuitive but actually fits with his real goals.

I really like the set up for the world and appreciate the fact that it has a twist I genuinely did not see coming but makes sense of all the inconsistencies I’d spotted throughout the book until the end. Hunter Blain is an always entertaining author and while I have some mild issues with the book, I really enjoyed it from beginning to end.