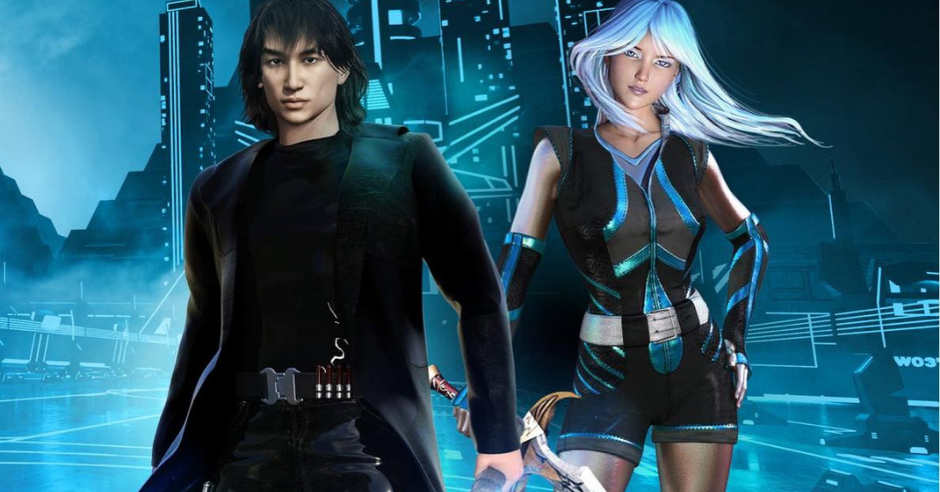 CYBER SQUAD – LEVEL 1: A GAMELIT/LITRPG LITE CYBERPUNK ADVENTURE by Anna Mocikat is a very different book from her BEHIND BLUE EYES series. While that was dark, edgy, violent, and sexy–this is more a fun slice of life story. It’s just it’s a slice of life story that takes place with a debugger working in a massive virtual reality game similar to THE ELDER SCROLLS ONLINE or WORLD OF WARCRAFT. I’m a big fan of things like SWORD ART ONLINE and some elements of READY PLAYER ONE so this seemed like something that would be right up my alley.

The protagonist, Kai, is a Eurasian gamer who is working an extremely cruddy job in the service industry. He hates his boss, his coworkers, and only manages to get through the day by thinking about when he’d hook up with his gaming guild. He has no relationships nor any prospects of them in the immediate future. In short, he’s the perfect everyman and has that Peter Parker quality that has kept him going for years.

Kai’s life takes a dramatic change for the better (and worse) when he finds out about the Cyber Squads. They’re the debuggers of virtual reality but instead of going through code, they playtest the games and proceed to slaughter the seemingly real as well as dangerous monsters that the bugs manifest as. This is a secret, though, as Kai is quite shocked to find out that the people killed by bugs don’t ever return to the game.

Rather than be horrified, Kai becomes fascinated with the cool and dangerous debuggers. Wanting to escape, he makes an application for them and is shocked to discover that not only is he hired but he is immediately put to work battling against the lethal errors in the game. He soon finds himself navigating the weird corporate environment of his new employers and making friends with his fellow cannon fodder.

Anna Mocikat’s RL history in the game development industry helps lend an authenticity to the descriptions. I believed in the majority of the characters and sadly also the casually sexist environment that puts Kai off. Anna sets up a number of potential relationships for Kai to pursue and I’m eager in seeing how they develop. While he’s crushing on the beautiful female lead of the Cyber-Squad, there’s plenty of other young women interested in him. Perhaps a bit of a fantasy but I’m eager to see how that develops.

I’m not normally a fan of progression fantasy or Lit-RPG but I really enjoy cyberpunk as well as a slice of life science fiction. I definitely think this is a fun palette cleanser after a more serious read and I’m eager to see what happens next in the universe.