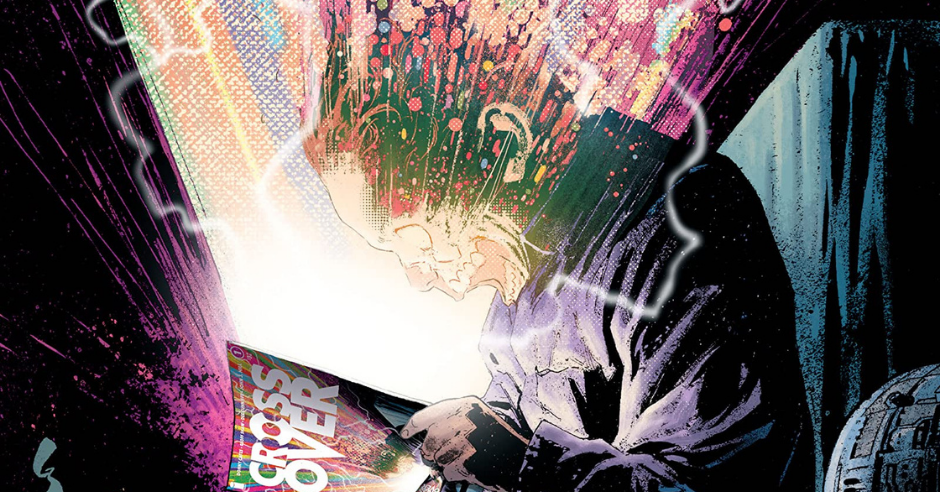 “imagine everything you thought was fantasy…was real. And now join us, in a world where reality is dead…and anything is possible…
”

Donny Cates’ and Geoff Shaw’s Crossover, as you would expect from the synopsis, is a comic book for comic fans. But not just fans of superhero books from “the Big Two”, fans of the very concept of a comic book. Crossover is very much a love letter to the very medium of sequential storytelling.

The story starts a few years after a catastrophe releases every character from every comic book into the real world in one gigantic, frenetic battle. And while the majority of these characters are trapped in a protective bubble (of energy and licensing issues), several move around freely in the real world but are being hunted by forces who wish to see them destroyed.

It’s kind of like what Ready Player One was to the 80s, except less overt and obnoxious about it (and I liked Ready Player One). What follows is the sort of weird meta-storytelling that I love peppered with references to comic books that you may or may not have heard of (I didn’t even know about some of them). Obviously, the real heavy hitters you’re seeing on the big screen don’t make appearances, due to the licensing issues I mentioned earlier, but frankly, I think the story is better for it, as it allows the narrative to twist in different directions while still offering some great cameos for fans of the wider genre and also being relatively accessible for people who want to enjoy the story.

Crossover Volume 1 collects Crossover Issues #1-6, but I also picked up #7 because it’s written by and features one of my favorite modern comic writers and my 2nd favorite Handsome Boy Modelling Agency Graduate: Chip Zdarsky. Zdarsky writes himself into a side story, where he’s forced to go on the run from the law, since he once wrote and drew himself into an issue of Sex Criminals, and that particular instance of him has also come to life. It’s an incredibly, weird, dark, meta story that manages to be both figuratively and literally self-indulgent.

And that exactly the kind of weird bullshit that I love. Man, am I glad I picked this one up.