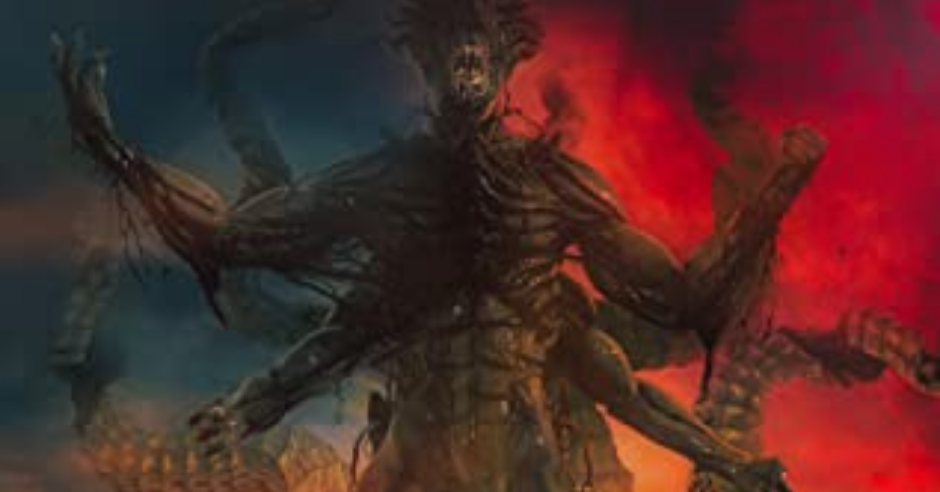 “‘Perhaps once you’ve wizened up the nature of things, you’ll learn that no gain is too tainted to refuse. You may one say find that the tower you’ve been building all your life is missing a foundation. It comes crashing down, crushing everything you love, and you’ve to pick up the pieces and rebuild whatever you can – ill-gotten or not.'”

Conqueror’s Blood is the second book in the Gunmetal Gods series, and the follow-up to the outstanding Gunmetal Gods, which is Book One. Gunmetal Gods is one of the first books I read in 2022 and still firmly sitting in the top five books I’ve read so far this year.

So you can imagine how jazzed I was to get my hands on the sequel. While it was completely NOT what I was expecting, author Zamil Akhtar has somehow managed to outdo himself with this second book in the series, which is no easy accomplishment.

To be clear, Conqueror’s Blood feels not so much like a sequel, but a completely new entry, in a different part of  the sprawling, lush, incredible Middle-Eastern inspired world that Akhtar has created. While some key characters from “Gunmetal Gods” show up, and have significant impacts on the story, they more or less are cameos appearances of some of my favs from that first book, including Kevah (protagonist from Gunmetal Gods), and another major character who readers thought was done for, and whose appearance shocked the hell outta me!

Other big names from Gunmetal Gods, such as Micah the Metal, Murad, and others are referred to in “Conqueror’s Blood”, and Akhtar cleverly inserts them on the lips of others in this new book, to only add to their legend, and backstory.

“‘I don’t recall the details of the fight, but it was over rather quickly…for some reason instead of finishing me off, he simply backed away and returned to the line while his army cheered his name – Murad! Murad!'”

But Conqueror’s Blood is not about the Sirmian Shah (one of my favs), or other great male characters, though there are plenty to choose from, with incredible new (old) ones like Hadrith, Kato, Eshe, Pashang, Kevah, Cihan, Kyars, Mansur, Khizir Khaz, and more gracing the pages. No, this novel is all about the astounding women, and the main characters of Conqueror’s Blood, Cyra and Zedra, are extremely complicated, messy, ambitious, obsessed, beautiful, dangerous, and utterly enthralling.

Politics, fanaticism, poetry, possession, power plays, blood magic, and hellish gods using mortals as bait, waiting to pounce on each other are afoot, and the kingdom of Alanya is the centre of all that. Steering all those elements are the two powerful female leads.

Cyra is a Sylgiz (an Endless Waste tribe) by birth, and royalty (albeit it minor) in exile, as the daughter of Khagan Yamar. But she has spent adulthood as a favourite – as close as a daughter – of Shah Tamaz of Alanya. Tamaz is a clever, long-reigning, pious, and mostly benevolent ruling monarch. Cyra’s estranged brother Cihan is now the powerful warlord of her old tribe.

Cihan wants his sister back in the fold. He also wants revenge on Cyra’s new people of Alanya. Cihan believes that Tamaz has wrongfully executed some of Cihan’s men. Cihan is ready to wage war on Alanya, for this cause alone, and also to feed his own ambitions.

Though due to her familial relationship, Cyra is sent to treat with Cihan on Tamaz’ behalf, Cyra has no intention of rejoining her real family and being a minor noblewoman among nomads in the Endless Wastes. She wants power and prestige, and the opulence of Alanya’s Sand Castle and its court. The upstart Cyra aspires as high as the wife of the future Shah.

But Cyra hides lots of secrets that could compromise her plans. Among them, due to searching for love in all the wrong places, boredom, desperation, and a desire to be useful, has driven her to become entangled in the plots of the scheming Hadrith, her paramour.

Hadrith’s causes might seem outwardly just in the end, but he also might be using Cyra to destabilize Alanya, to increase his own gain. The consequences of his schemes could harm all Cyra holds dear.

Meanwhile Zedra, as well, is favoured by Tamaz, and like another daughter to him. Little more in actuality that a concubine to Tamaz’s heir, Kyars, Zedra has borne Kyars a son, and the potential future Shah of Alanya.

As the mother of the Crown Prince’s child, and being beloved of Tamaz, Zedra wields some measure of influence, like her best friend Cyra, in Alanya. But Zedra is keeping far darker secrets than Cyra. For an ancient sorceress, tied to those who worship Father Chisti – called the Children – lurks inside the body of Zedra. A shapeshifting being, obsessed with restoring the faith of the Children, and in the process, potentially destroying the world.

For me, of course, the most important thing about a book is always the characters. I loved what Akhtar did with Conqueror’s Blood, following a similar format in Gunmetal Gods, where we alternate POVs between two people who are on opposite sides. This time, the two female leads are close friends, and it is only as things unravel we see how diametrically opposed they are.

Even if one character is obviously more sinister than the other, that other character is highly flawed, makes horrible decisions, and does bad things. Cyra is tortured by what she does to find comfort, and guilty over whose arms she find comfort in. But she is exceptionally cunning, brave, and fundamentally, a good person at her core.

Consequently, the “bad” main character, Zedra, also internally feels remorse for her crimes, and might even evoke sympathy from the reader, as we gain insight and understanding into why she is the way she is. Powerless to escape her long history of brutality, both that she has committed, and what has been enacted against her family, all in the name of religion and the gods, Zedra was my favourite character of this book. So compelling, sometimes so sinister, and yet so vulnerable, I was drawn to this main player, to see if there was any redemption possible for her.

Moreover, the secondary characters are all highly grey, with murky motivations, continually shifting loyalties, willing to do the worst to further their aims. And, with varying factions within factions, the reader’s emotions will roller-coaster as they change sides too, uncertain of who truly to root for in terms of who deserves to ultimately emerge victorious, as Akhtar pulls us along like puppets on a string, through a bloody trail of deceit, siege, and primeval gods.

As with Gunmetal Gods, Akhtar is on the top of his game in terms of the mind-boggling world building, in Conqueror’s Blood. He makes me want to take a stroll through the streets of Alanya, soaking in the poetry in Laughter Square, eat a bowl of tamarind sherbet, and inhale all the spices. The world is so layered, beautifully textured, replete with different customs, cultures, faiths, languages, attire, idiosyncrasies, literature, and everything else that makes it feel completely real.

We get so many amazing and interesting themes in this novel, but again, the heart of it is religion and faith. We see and hear more of the gods, and the main one who dominates the last quarter of the book is about as despicable as they come. The scarier thing is that he might not be the MOST despicable of what IS coming.

And we see mortals (and sort-of-mortals) completely not only at the mercy of the capricious gods’ ambitions, but also paralyzed by their own faith, their prejudices against the faiths of others, and driven to terrible, inhumane acts by zealotry. The end always seems to justify the means, in the mind’s of the faithful, and by the time there is any real kind of self-reflection, and examining of what one is willing to do for one’s gods, and if those gods are worth all the horror, it’s usually far too late.

Akhtar may have created an intellectual, sophisticated world where poetry is appreciated, even revered, but I find much of his writing to be poetry itself. I keep finding myself re-reading passages, for the beauty of the words. I attach one of my favourites below:

“Did she want me to say sorry? Sorry I destroyed your life…I wished I’d never done it, but I couldn’t hold that remorse. True remorse requires repentance, and true repentance requires justice, and if I were to face justice, then who would protect my son?”

The magic in the books is eerie. Blood magic, where everyone’s blood has a different value.

“And worse…it can only be written with saint’s blood, angel’s blood, or god’s blood. Three of the rarest flavors.”

Zedra uses blood as the engine for her powers, and it is truly chilling to behold. But besides the blood magic aspect, it is the gods in the book that really make things fascinating. The epic climax, when some of them come calling, is completely breathtaking.

This book leaves a lot of futures in question, a lot of character arcs incomplete, and the reader begging for more.

Conqueror’s Blood is an extremely dark book, violent, haunting, beautifully written, and simply marvelous. Far better than five stars, and there is no way I will ever miss out on reading everything Akhtar writes. I have no idea where he is taking me next, but I’m going definitely going along for the ride. It promises to be wild!