Anna Mocikat has a great talent for The Matrix-style scenes

BEHIND BLUE EYES: WAR GAMES is the third book of the BEHIND BLUE EYES series by Anna Mocikat. The series is a cyberpunk thriller story based around the decadent corporate-ruled nation of Olympias which consists of the entire Western Hemisphere. 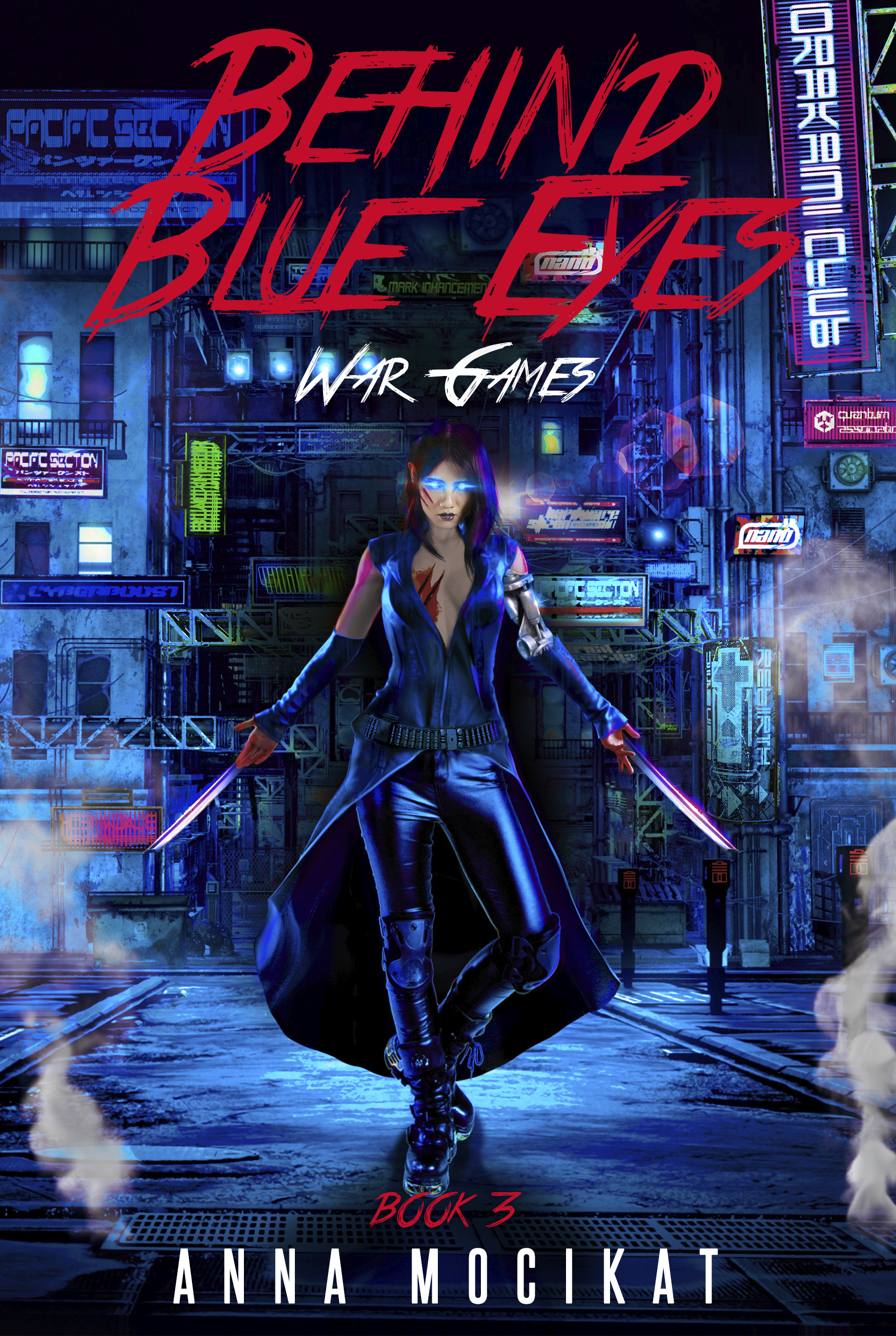 The Olympias Corporation controls North and South America using superpowered cyborgs called Guardian Angels with the striking condition of glowing blue eyes. Each of these soldiers is brainwashed to loyally serve their leader, Metatron, except for one who has managed to free herself: Nephilim.

Anna Mocikat is one of the foremost members of a new crop of independent science fiction artists that have emerged to tackle seemingly dead genres. As ALTERED CARBON and BLADE RUNNER 2049 indicate, cyberpunk isn’t so much dead as sleeping so I was interested in seeing if she could revive it. I’ve enjoyed each of the previous novels and their ability to mix social commentary with thrilling action.

War Games continues directly from Fallen Angels and deals with the serial killing corporate executive, Cillian Stavros, killing members of the Guardian Angels in horrifying ways. Worse, Cillian is being aided by Nephilim’s former lover, Jake, with the man having no care about the lives of anyone but his ex. Even when those lives are the people Nephilim called her friends and family. It’s an ugly look but makes the character far more interesting than the one-note love interest he was seemingly before.

This book finally introduces us to the Olympias board of directors. They are a real piece of work, I’ve got to say, being every bit as decadent and corrupt as Ancient Rome’s worst leaders. It is easy to believe Metatron when he says they have to be overthrown but given he wants to replace them with a cyborg nobility that he’s already shown himself to have no hesitation to brainwash, it’s unquestionable he’d be worse.

Strangely, my favorite part of the book is the character development for Nephilim’s creepy stalker, Finwick. Having adopted an orphaned girl Nephilim rescued from human trafficking, Finwick has been trying to provide for her. Unfortunately, they come from very different worlds and his actions against the Guardian Angels are forcing them on the run again. Watching him try to care for someone else while realizing he’s way in over his head with the criminal underworld was very entertaining.

I have some issues with the fact Nephilim continues to be brainwashed by Metatron as it’s not something that’s particularly enjoyable to read about. You want her to break free and take the fight to the Olympias Corporation, but I also appreciate just how good Metatron is at selling his ideology. He’s let her have more of a loose reign than most of his minions because he wants her to join him willingly. Yet, he’s not willing to risk her actually turning him down.

There’s a lot of awesome action sequences spread throughout the book as Anna Mocikat has a great talent for The Matrix-style scenes. The biggest complaint I have is the fact the book ends on a cliffhanger. There’s quite a few unresolved plot points just like the previous book, and I was hoping the stories would be more self-contained. On the other hand, the book is just good from start to finish.

Check Out Behind Blue Eyes – War Games by Anna Mocikat