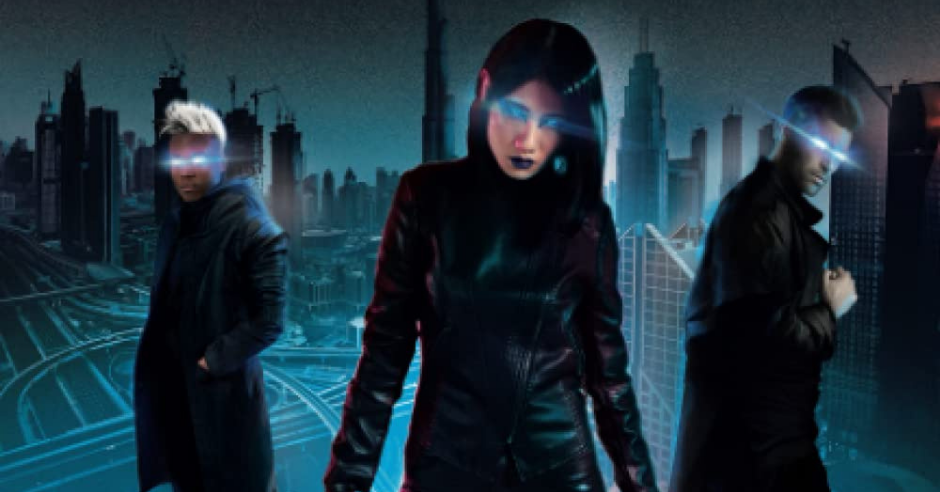 They are the perfect hybrid between human and machine.

BEHIND BLUE EYES is a cyberpunk action adventure by newcomer Anna Mocikat who states in her interviews that she is a lifelong fan of the genre, George Orwell, Ghost in the Shell, and The Matrix. These influences are very obvious and help make the novel a wonderful homage to numerous classic works of cyberpunk. It’s also an entertaining story that involves beautiful cyborg super soldiers tearing through armies of goons like Underworld’s Selene crossed with Wolverine (the X-23 version).

The premise is that the future has fallen prey to a series of conglomerates that have replaced the world’s governments. The largest of these is the Olympias Corporation that rules the remains of the Americas. The Olympias Corporation maintains its control via the use of cybernetically enhanced agents called Guardian Angels. The most dangerous of these agents is Nephilim, a beautiful Eurasian woman who was raised to be a killer like all members of her angel-themed team. After a harrowing execution of dissidents, Nephilim is starting to have doubts about her purpose.

Nephilim only manages to keep her doubts, though, due to damage done to her cybernetics by a EMP weapon that leaves her able to question things without having her mind immediately erased. Taking advantage of this brief interlude and the affections of a smitten technician, Nephilim manages to permanently protect herself from brainwashing. This shows her the Olympias Corporation and its arcologies are not the utopian paradises but bread and circus dystopias where the rich prey on the poor for literal sport. Seriously, there’s actually a “Most Dangerous Game” hunt where the participants can kill their victims for money.

I’m a big fan of cyberpunk that gets into the nitty-gritty of the methods that society uses to control us in the future. Anna Mocikat uses references to Animal Farm, 1984, and other literary references to get to the heart of what her dystopia is all about. On the surface, it’s much nicer than any of Orwell’s worlds but the seeming riches of the populace comes with a complete lack of rights. You can be killed at any time for any reason and your lives are completely under their control ranging from families to education to sexual rights.

There’s a romance between Nephilim and a seemingly enlightened “normal” citizen but this proves to be deceptive and I enjoyed the twists that accompanied it. Nephilim is also the object of affection of other characters with technician Finwick being a seeming parody of the kind of drooling nerds that are more in love with the idea of a woman than the actual thing. We also have Metatron, the leader of the Guardian Angels who revels in his power over his associates while flouting the power of conventional society even as it enforces its darkest deeds.

The book is fantastic and I really love its amazingly written action sequences. Anna Mocikat has a real gift for describing energetic emotionally-charged battles that take full advantage of the fact our heroine (as well as her opponents) are cybernetic superbeings. I really recommend it to people who want to give a fun little cyberpunk adventure a try and support an indie author. The ending is pretty dark but just caused me to immediately pick up the sequel rather than turned me off.

C.T Phipps is a lifelong student of horror, science fiction, and fantasy. An avid tabletop gamer, he discovered this passion led him to write and turned him into a lifelong geek. He is a regular blogger on “The United Federation of Charles”.