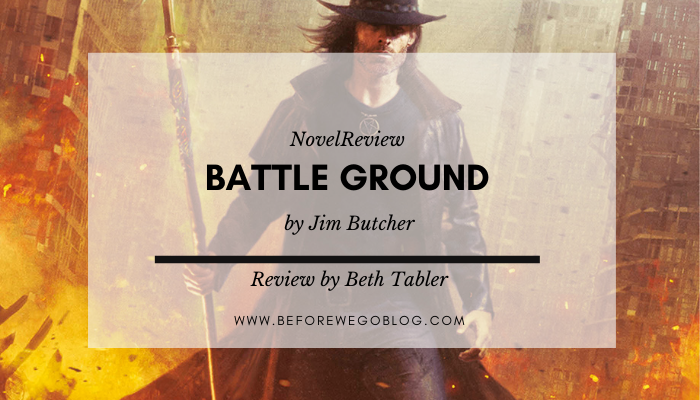 We start Battle Ground on a boat coming away from Demonsreach… 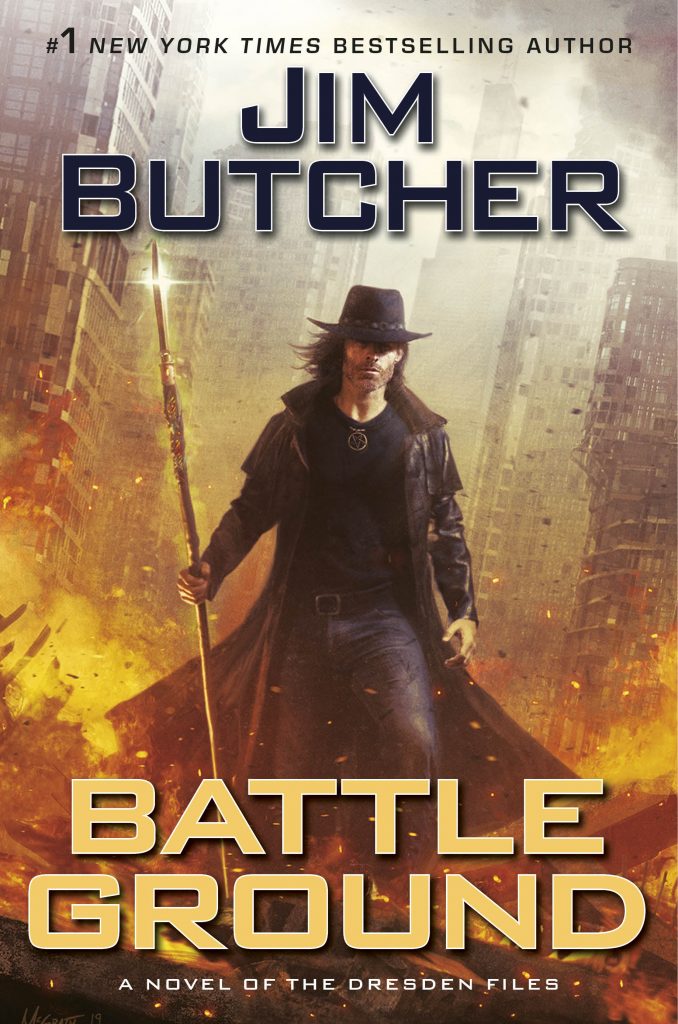 “Abruptly there was a crunching sound, squeals of protest from the Water Beetle’s hull and superstructure, and the boat went from moving slowly to not moving at all in the space of several seconds… It was thick, rubbery, pulsing, living limb, deep red-purple in color, covered in leathery, wart shaped nodules and lines with toothed suckers… a great, faintly luminous eye glimmered up at me through the waters of Lake Michigan. A colossal squid. A Kraken.”―

THINGS ARE ABOUT TO GET SERIOUS FOR HARRY DRESDEN, CHICAGO’S ONLY PROFESSIONAL WIZARD, in the next entry in the #1 New York Times bestselling Dresden Files.

Harry has faced terrible odds before. He has a long history of fighting enemies above his weight class. The Red Court of vampires. The fallen angels of the Order of the Blackened Denarius. The Outsiders.

But this time it’s different. A being more powerful and dangerous on an order of magnitude beyond what the world has seen in a millennium is coming. And she’s bringing an army. The Last Titan has declared war on the city of Chicago, and has come to subjugate humanity, obliterating any who stand in her way.

Harry’s mission is simple but impossible: Save the city by killing a Titan. And the attempt will change Harry’s life, Chicago, and the mortal world forever.

There is fighting, and then there is what happened in Jim Butcher’s Battle Ground, the latest addition to the Harry Dresden universe. Unlike the other books in the Dresden file universe, Battle Ground does not have a beginning, middle, and end. Battle Ground is, instead, the high note in an exciting crescendo that started during Peace Talks and is finishing with a bang. In actuality, Peace Talks/Battle Ground is one long single-story too long to be in one book. A gift to his readers after it being so long since the last story.

We start in Battle Ground on a boat coming away from Demonsreach. The city of Chicago is under attack from a mashup of Fomor King Corb, Listen, and the Last Titan Ethniu. Under any circumstances, any of these foes would fill a Dresden novel. As it stands, we have all three battling against the acordees. All enemies and friends are digging deep within themselves to pull out all the magical stops. It is the witching hour, the best time for gathering energies, and Chicago is swirling with a combination of fear and battle lust.” Apocolypses always kick off at the witching hour.”

All the cities inhabitants are on the edge of their seats, waiting for the final moment, the one last thing that will send everyone to battle. Whether that is battle lust or resignation at their fate, the city holds its breath.

Harry, after depositing his brother on Demonsreach, and the island accepting it’s newest charge. Harry and a cadre of allies are frantically sailing Thomas’s little boat, The Water Beetle, back to Chicago. Chicago is blacked out. The buildings of downtown look like dark and menacing jagged cliffs. The only light is the light of fires raging out of control and candlelight in the windows floating like stars in the black skyscrapers.

This squabble with the Kraken happens in the first five pages of the book. And this is relatively slow and stately compared to what happens in the rest of the novel. After Harry meets with the Kraken, the Fomor forces rise out of Lake Michigan’s cold waters to start the battle. In many ways, I think Battle Ground is the denouement of the series’s first 18 books. Butcher has played the long game here. Foes, friends, and allies are brought forth in a tremendous mythological battleground.

Characters you would not have paid much attention to in previous books come out of the woodwork and show their real metal. I’ll give you a small preview with the character Major General Toot Toot Minimus. We have met and dealt with Toot Toot on many occasions. “Major General Toot-Toot Minimus resembles a glowing violet comet more than anything else as he approached in a low-pitched buzz of dragonfly wings.” He is a wee folk, small, almost childlike in stature with the silvery wings of a dragonfly. Nearly too cute in representation to be anything menacing. Especially when standing shoulder to shoulder to the Black Court and Fomor. You will think that until the wee folk come out to do battle, and the sky lights up as if it is full of deranged Christmas lights.

Do not under any circumstances discount the little guy.

There is a reason why wee folk has survived as long as they have. The Wee Folk respect the hell out of Harry and love pizza. Perfect reasons to go to war, and there are a lot of them. And they are in everything, as fast and hummingbirds and as gentle as porcupines. They could poke your eye out before you had a chance to blink.

Theme wise, there are two ideas worth talking about that permeate the novel and color each of the exquisitely orchestrated battle scenes. Firstly, for Harry, this book is about compartmentalizing and conquering. Battle Ground plays on his unique strengths of mental toughness, ones that Harry has wrought from a lifetime of mental exercises and the practice of harnessing his will.

Throughout this novel, he will watch and experience great horrors. He can either break and crack, folding under the massive strain, or be who he is and do what he must. Dresden has to take that pain, anguish, and horror that he feels and shove it into a little compartment in his mind and move forward. He does this not to run from the pain because his experiences are worthy of that pain. It would be a coward’s way out otherwise. It is heroic in the reading and what I think to be the most challenging thing Harry has ever had to do. But if he is going to move forward, he must.

The second theme is that, as I mentioned earlier, do not underestimate the little guy. Harry is a little dude in the cosmic scheme of things. He is a mid-grade fighter, less knowledgeable and skilled as some, but in most situations where he is fitting people or things in his weight class, he can handle himself. But outside his weight class, things become a bit more complicated.

Sometimes you do not need a lot of power to overcome; you need a persistent personality and the will to keep going. You see that in Harry, in Butters, in Sanya, Murphy, the week folk, and the wolves. You see that in all the cosmically lower characters throughout the novel. I wish I could tell you what will happen instead of eluding to it, but Battle Ground is not that kind of story. I would spoil the sheer magnitude of what these characters face and how everything plays out in this massive war of mythological creatures with one slip of the tongue.

Pacing wise, this is unlike any Harry Dresden book I have ever read. It is relentless. It beats you, swipes you to the side, and then beats you again. And, in a moment when you thought you were safe, some incredible creature comes forward to show you how minuscule and insignificant you are. They break your will, they break your heart, and then eventually they break your body. Harry falls and rises from one moment to the next, relying heavily on the mantle to keep him going.

If he were an ordinary human, he would have died in the first five pages of the story. Probably from the mental trauma alone.

Also, Butcher is not one for subtleties. By the end of this story, there is some resolution, but Butcher is a magician. While you were looking at one thing, he wallops you with what starts as a future plot in the next book. Even though Battleground is, in a lot of ways, the ending of much of the previous story arcs, it is the beginning of Harry’s second chapter. It is going strong, and if that ending told me anything, it is that Harry’s foes, those close to him and those keeping their distance, are going to come back and bite his ass. And I am here for it.

Battle Ground is an urban fantasy done at its best. Indeed it is the bar in which other authors should strive to. Harry is everything I would want in my wizard from Chicago. And I cannot wait till the next book is out so that I can dive in and read it in one day like I did this one.

Check Out Beth’s Other Reviews and Articles

Top Urban Fantasy Series To Get You Hooked on the Genre