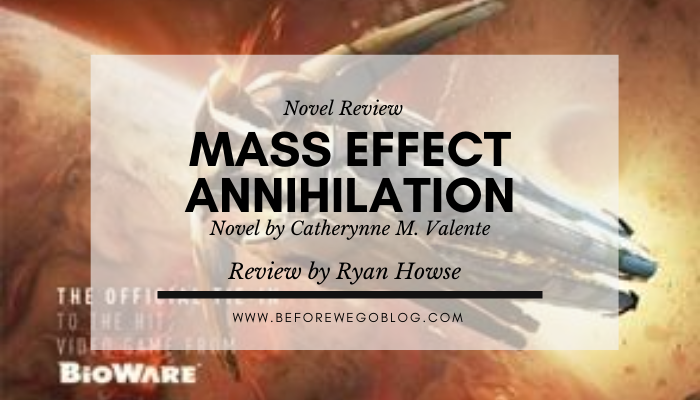 “There are puzzles to solve, a ticking clock, and great characters to root for.”

Except that her joints ached and her head hurt and it tasted like a vorcha had shit in her mouth.―

An official tie-in to the hit video game Mass Effect: Andromeda. As the Quarian ark Keelah Si’yah sails toward the Andromeda galaxy, it carries 20,000 colonists from several races including the Drell, Elcor, and Batarians. Along the way a routine check reveals that many of the Drell colonists have died in their cryopods, and a pathogen is discovered. It begins to jump species, then the ship’s tech begins to fail, making it clear that this is no accident. It’s murder, and the perpetrator is still on board. The ship’s systems rapidly degrade, and panic spreads among the colonists. To make matters worse, the virus yields a terrible swelling of the brain that causes madness, hallucinations, and leads to violence. If the ship’s crew can’t restore their technology and find a cure, the Keelah Si’yah will never make it to the Nexus.

I have no issues with tie-ins. Matthew Stover wrote several Star Wars books, including the novelization of Revenge of the Sith; I read all of them even though I dislike Star Wars. I love the first Predator movie alot, but I’d never go out of my way to find out more lore about the galaxy’s coolest hunter. That said, I happily read Jeff VanderMeer’s Predator: South China Sea because I’d enjoyed VanderMeer’s other books.

And one of my favorite authors is Catherynne Valente. So when she did a tie-in to Mass Effect, a video game franchise that’s pretty great, I didn’t hesitate.

Bioware has had some of the sharpest writing in video games. Their characters have opinions and motivations and argue and banter and make sense. The settings are fleshed out with various tensions and mores and a sense of history behind it. And their moral dilemmas are honestly excellent.

(For the record: Mass Effect 1 has the best story, and because I mostly play for story, it’s my personal favorite. Mass Effect 2 has the best characters. Mass Effects 3 and Andromeda have better gameplay. I will not be taking questions at this time.)

I’ll admit, when opening it, I didn’t know what to expect. I know the Mass Effect setting fairly well, and I know Valente’s writing, and I didn’t know how they would merge. The answer is: pretty well. It doesn’t have as much lyricism as her other books do. It’s a fairly fast-paced tech/disease thriller with some great characters, some wonderful extrapolation of what we know of the Mass Effect setting, and some top-notch writing.

In the Mass Effect Andromeda video game, there are several arks—Asari, Turian, Salarian, and human—that made a 600 year-long trip across space to settle in the Andromeda Galaxy. The settlers all went into cryostasis, to be awoken at the far end. If those names mean nothing to you, don’t worry—they’re just other aliens who don’t show up in this book because they got their own ark. Instead, Annihilation follows the Quarian ark, which happens to have a lot of my favorite Mass Effect aliens on it.

In addition to the Quarians, we get elcor, elephantine aliens who need to state their emotions before their sentence because no other species can understand their tone otherwise. We get volus, who make their living as traders, batarians, who are often the villains in Mass Effect as they get hired as mercenaries and slavers, and drell, who are desert-loving lizard-esque aliens who also lost their homeworld.

Yorrik, the elcor doctor who has to attempt to study this disease without any real equipment was a definite stand-out. He’s obsessed with writing the works of Shakespeare into Elcor, and being a doctor was his fall-back job when he couldn’t be an actor and playwright. Much like the long-running Klingon joke about how you haven’t read Hamlet until you’ve read it in the original Klingon, Yorrik is convinced Shakespeare was in fact Elcor. One of the reasons he left for Andromeda was that the people there would need entertainment, and he hoped to provide that on the stage. Lest readers think he’s simply a doctor with a neat quirk, he also had most of the most powerful scenes in the book.

There’s a drell detective who feels very Holmesian, though the fact that the detective has to read a) aliens and b) aliens in giant protective suits that make body language difficult somewhat hampered her plotline. And there’s Senna’Nir, the Quarian sleepwalker (which is the job title for the one who wakes up from cryosleep to check systems) who has a neat relationship with technology that I won’t spoil.

Wry self-deprecation: I am a pediatric allergist. Auditory, olfactory, esophageal.” Anax Therion and Senna stared at him. “In sheepish explanation: Ear, nose, and throat. I do sniffles.―

The batarians, who in the video games were mostly just humanish things to shoot, get fleshed out significantly in this book. There’s one sequence where a batarian explains his life history to Yorrik that made him and the other batarians, if not sympathetic, at least understandable.

“With deep disgust: You sell weapons, narcotics, and people. That is what your people did with their chance.” Jalosk shrugged. “Someone buys them. If rainbows, cuddles, and smiles brought the highest prices, we’d be selling those instead. Back home I had asari customers, salarian, turian, even human. Yet you do not hate their entire races for purchasing and using what the batarians sell. Yes, yes, slavery. It is so terrible. I have heard it all. Yet my father was a slave. He bought our freedom. He bought us a future. You can buy your freedom from a batarian slaver. Good luck trying that with anyone else.”

The plot clips along at a good pace. There are two simultaneous problems that both feed into and exacerbate each other. The first is that a disease is running rampant through the ark, killing people in cryostasis, and jumping between different aliens with wildly different physiognomies. The second is that the computer system keeps telling them everything is fine even as everything starts falling apart.

There are puzzles to solve, a ticking clock, and great characters to root for. While it didn’t have the stunning power of Valente’s Deathless, the perfect dream-prose of Palimpsest, or the sheer comedic joy of space opera, it was an excellent page turner.