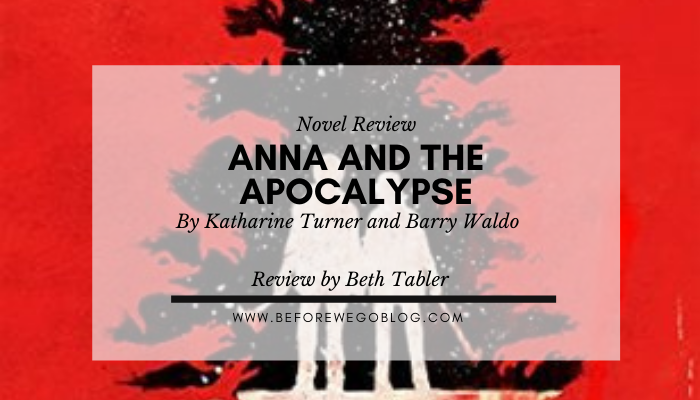 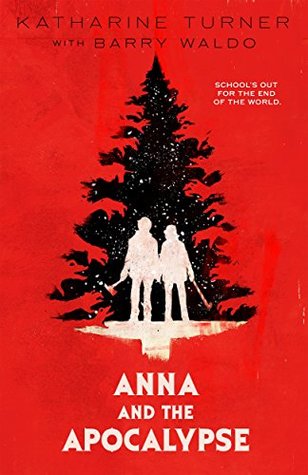 Anna and the Apocalypse

by Katharine Turner With Barry Waldo

“Forget your troubles, Let go your woe. Live for today ’cause you might be dead come tomorrow!”―

Katharine Turner With Barry Waldo, Anna and the Apocalypse

Nightmarish villains with superhuman enhancements. An all-seeing social network that tracks your every move. Mysterious, smooth-talking power players who lurk behind the scenes. A young woman suddenly in charge of the most decadent city in the world–and her very smelly cat.

Zoey Ashe is like a fish so far out of water that it has achieved orbit. She finds herself struggling to establish rule over a sprawling empire while Tabula Ra$a’s rogue’s gallery of larger-than-life crime bosses and corrupt plutocrats smell weakness. Tensions brew across the city.

A steamer trunk-sized box arrives at Zoey’s door, and she and her bodyguard Wu are shocked to find that it contains a disemboweled corpse, and even more shocked when that corpse, controlled by an unknown party, rises from the box and goes on a rampage through the house. After being subdued, it speaks in an electronic voice, accusing Zoey of being its murderer. Soon, it makes the same claim to the public at large, along with the promise of a cash reward for proof that Zoey and the Suits are behind the crime.

Now Zoey is having doubts of her own: Is she 100% sure that someone on her team didn’t do this? She also doesn’t even have a complete list of what businesses she owns, or what exact laws her organization is still breaking. So what does she really know?

Anna and the Apocalypse by Katharine Turner and Barry Waldo is an entertaining if an unlikely combination of a teen story, Christmas, and zombies. Based on the musical horror/comedy movie, the book involves the protagonist Anna, her best friend, and her school friends as they battle the undead on Christmas Eve. There are evil teachers, undead pensioners, an undead 11 and under girls soccer team and a wooden candy cane turned weapon. It is a strange combination but entertaining.

Zombie horror-comedy is a well-tread genre. Arguably started with the titular Sean of the Dead and followed up by numerous movies, including Zombieland and Warm Bodies. If you will pardon the pun, the zombie genre has been done so much it is dead. But, with everything, I don’t think there has ever been a musical zombie Christmas story.

So while zombies as a genre have pretty much saturated the market, reaching the realm of musicals is a whole new thing, which there lies the rub. Should a zombie musical be made? Is a zombie musical one step too far? That is up to the viewer; I am always down for campy fun. Sometimes things are so bad that they transcend bad and become great. They revel in their awful and find legions of fans who love to laugh at the ridiculous and themselves for loving it so much. I am not sure if Anna and the Apocalypse makes it to cult status, but it tries.

The plot is a simple one. Anna’s day starts like any other. “It was Tuesday. A regular, boring Tuesday. Really, no different than any other Tuesday that Anna had experienced on her eighteen years on Earth.” We have all had days like this, the mundane and uneventful. Days that plod along from one moment to the next in a long daily march towards sleep. The fun thing that Anna and the Apocolypse do very well is call out how one boring ordinary day can go to the extreme and the extraordinary and change your life forever. How one day can become the “before” and the “after.” And, for Anna and her best friend John, that day was today.

Anna laments at the sameness of it all. How the day is gray, and John has his daily jelly donut. She yearns for the different, the exciting, the something else. It is a sentiment shared with my teenagers, and even on into the doldrums of adulthood. We yearn for something novel and new to break up the monotony. Driving along, Anna’s father screeches on the breaks, almost careening into a shambling blood-covered figure before it collapses to the ground. Anna’s response to this is, “Well, that is a bit different.”

“The white fleecy snowman costume was covered in sticky red and black patches and stank of something far worse than sweaty feet and cigarettes. Underneath the silk black hat, a man’s face peered out of the costume, but something was very, very wrong. The whites of his eyes were red and his irises were gray, and at first, John thought he had meat smeared all around his face, but when Anna rolled him over and his jaw went slack, John realized his skin was missing.”

Having seen both the movie and read the book, I don’t think it is particularly fantastic. It doesn’t have the campy charm that the musical does. It does have a fun story, as the movie does, but where the dialog of the film sung at the oncoming horde is amusing, it doesn’t translate well in novel form. You miss the campy charm. You end up having an offbeat zombie somewhat funny book that takes place around the holidays. If you are a fan of the movie, go for it! But aside from that, this was a lukewarm read. Funny, and passable but nothing much going on beneath the surface.

I bought a copy of this for my own library.